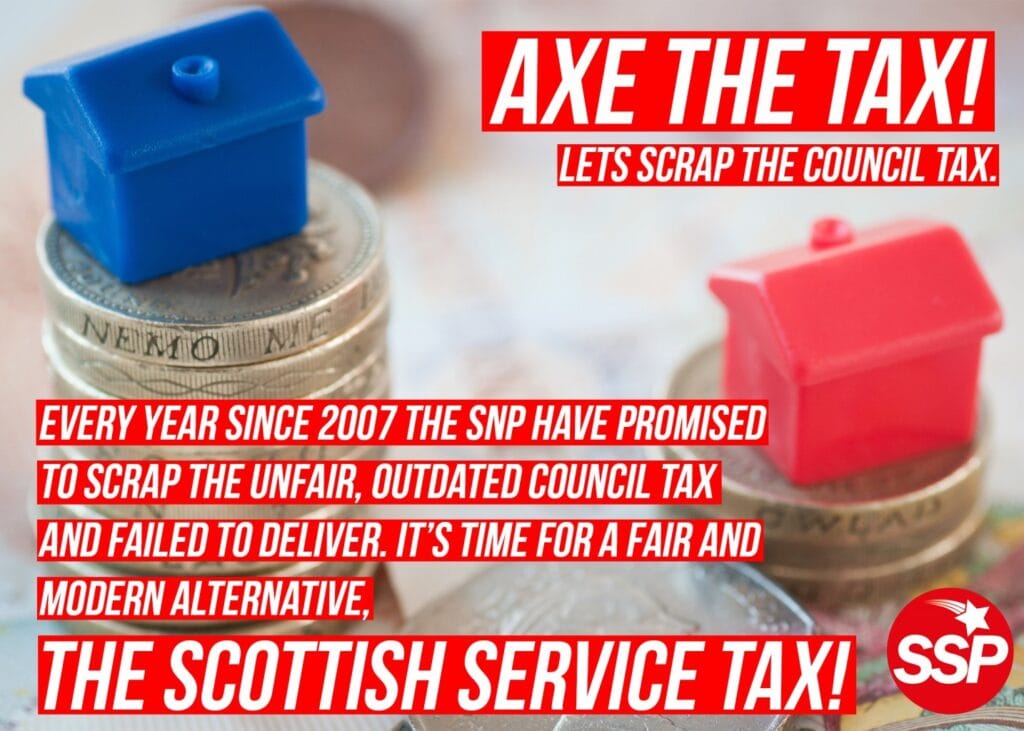 Council Tax arrears are Scotland’s primary debt issue. Before the Coronavirus crisis, 38% of people in Scotland had savings below £2,500 – 21% had no savings at all. Poverty pay jobs, underemployment, austerity cuts, and rising living costs have trapped thousands in cycles of unpayable debt.

The Council Tax is the government’s giveaway to the most wealthy. Lower-income households pay a higher proportion of their income than the wealthiest – whose share of Scotland’s wealth has grown, while their Council Tax did not.

In 2007, the SNP promised to scrap Council Tax. However, they abandoned that promise in 2009 and Council Tax bills continue to rise in Scotland. In 2020, every local authority raised Council Tax by between 3 to 4.84% in order to make up for Holyrood’s local austerity cuts.

The SNP was condemned last year for plans to cut funding to CAS branches in Glasgow, who provide advice and support to those with Council Tax debt.

The Scottish Green Party walked away from its own electoral pledge to scrap Council Tax, in exchange for a workplace parking levy which has been condemned as a regressive tax hurting the lowest-paid workers.

The Scottish Government, the SNP, and the Greens have yet to follow through on their commitment to publish legislation for Council Tax reform before the 2021 Scottish election.

Now, CAS warns that continued economic disruption in 2021 will force a Council Tax debt ‘explosion’. Job losses, the end of furlough, and soaring rent will push thousands into poverty, forcing households to make difficult decisions about what they can afford to pay.

The Scottish Socialist Party has made abolishing the regressive Council Tax a flagship policy.

The SSP will replace the regressive Council Tax with a progressive Scottish Service Tax – a local income tax scaled to the ability to pay.

A progressive system of tax will lower the bill for 80% of taxpayers and exempt the first £10,000 of income – all while delivering full funding for local services, by making sure the very wealthiest in Scotland pay their fair share.

Proper funding, fairer tax, and democratic management of Scotland’s vast wealth are all vital in delivering measures to protect Scotland’s least wealthy through the economic disruption caused by the pandemic.

The SSP’s socialist recovery plan includes higher wages and better working conditions; a publicly-owned National Care Service which is free at the point of need; rent controls and building 100,000 units of public housing until demand is met; free public transport, and significant investment in environmentally-sustainable jobs as part of an expanded system of public ownership.