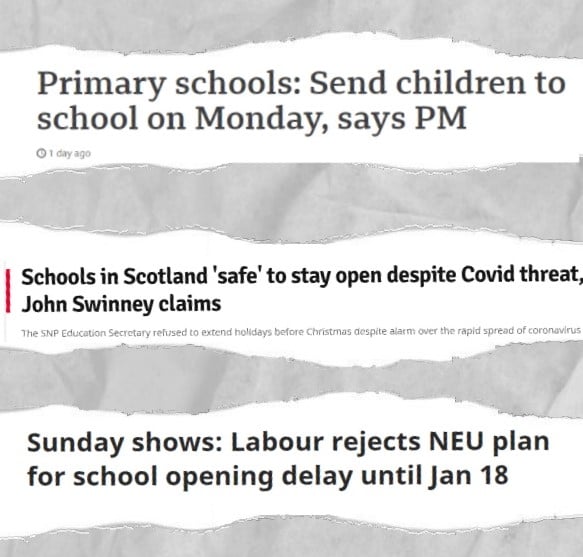 The Conservatives, SNP, and Labour have come under fire for their mishandling of school safety concerns as the UK returns to lockdown.

Schools in Scotland and England have moved to remote learning as surging COVID cases threaten to overwhelm the National Health Service.

The Scottish Socialist Party has said that the situation highlights the need to put Trade Unions and workers in control of workplace health and safety decisions.

Tory Prime Minister Boris Johnson took the decision to switch to remote learning on Monday 4 January – just one day after insisting that workers and learners should return to school.

The move followed an earlier announcement from the First Minister, Nicola Sturgeon. The Scottish Government has been criticised by education workers, the EIS, and the SSTA for failing to listen to concerns about COVID safety in Scotland’s schools.

Workers have flagged the impossibility of social distancing, poor provision of PPE and hand sanitizer, and last-minute decision-making as causing health and safety chaos.

Deputy First Minister and Education Secretary, John Swinney, insisted that “our schools are safe” on 21 December – but information published by the Scottish Government on 4 January show that, by 18 December, COVID cases ranged from 1 in every 180 people to as high as 1 in every 115 people.

Labour Party leader Keir Starmer is under fire for failing to back the National Education Union in resisting unsafe workplaces. In November, Starmer’s Labour rejected a NEU demand to halt the spread of Coronavirus by switching schools to online learning.

While education workers protested health and safety failings in workplaces, Starmer wrote in a Daily Mail article that they should be made to return to work – “no ifs, no buts”. On breakfast television in May, he failed to support workers using their legal right to refuse unsafe work.

Since then, COVID cases have reached record highs in the UK – threatening to overwhelm the NHS. Education workers falling sick has exacerbated the staffing crisis in schools.

Learners have faced enormous disruption in their education through having to repeatedly self-isolate. As early as September, tens of thousands of pupils were missing from Scotland’s classrooms due to COVID.

“Teachers have been an afterthought and this uncertainty continues to cause a lot of stress. Working within a system that is already understaffed, we’re not sure how we will cope with this plan if colleagues have to go off sick.”

The Scottish Socialist Party is calling for a radical rethink of workplace and health and safety practices – and has done so since the start of the pandemic. The SSP supports putting priority health and safety decisions into the hands of Trade Unions and workers.

“The unions in Scotland need to insist that all workplaces, regardless of size, be included in Risk Assessments which are published before a return to work—and indeed, in workplaces that have remained open throughout the pandemic. The carnage in the care homes grotesquely highlights the need for that.

“Furthermore, years of austerity by successive governments has meant decimation of Health and Safety Executive (HSE) staffing levels, meaning there are far too few safety inspectors for routine workplace visits in normal times, let alone to deal with this deadly crisis.

“That serves to reinforce the need to deploy the vast army of union health and safety reps to be fully involved in Risk Assessments in every workplace. These are workers with practical workplace knowledge, combined with union training on safety measures, who in reality should have day-to-day control of workplace safety.

“If workplaces are not demonstrably safe in the eyes of the appropriate unions, national unions need to give a lead to the membership and refuse to return to work until they are safe. Put workers’ lives first and last. Put people before profit.”

The SSP demands full average wages – reflecting hours worked, not just contract hours – for those who are unable to go to work. Lockdown restrictions, additional care responsibilities, and stopping the spread all show the need to ensure nobody is financially punished for doing the right thing.

Workers who cannot afford to be off work through self-isolation, government restrictions, or putting health first are less able to abide by rules – and are more likely to get sick.

Inadequate £95 per week statutory sick pay and a furlough scheme that represents only a fraction of the minimum wage are unjustifiable attacks on the lowest earners. The SSP has said that no one should have to choose between their income and their health.

In preparation for workers refusing unsafe work on 4 January, the National Education Union has carried out organising activity on a historic scale.

A petition supporting the NEU’s position gathered 260,000 signatures, while the Union reports increasing membership uptake of thousands per day. An online meeting held by the NEU attracted a staggering 400,000 attendees – the largest political meeting in British history.

Unlike Keir Starmer, the Scottish Socialist Party supports the work of Trade Unions in keeping workers safe during the pandemic. The SSP is encouraging everybody to join a Trade Union this year, and to build fighting Unions that stand up for the working class.