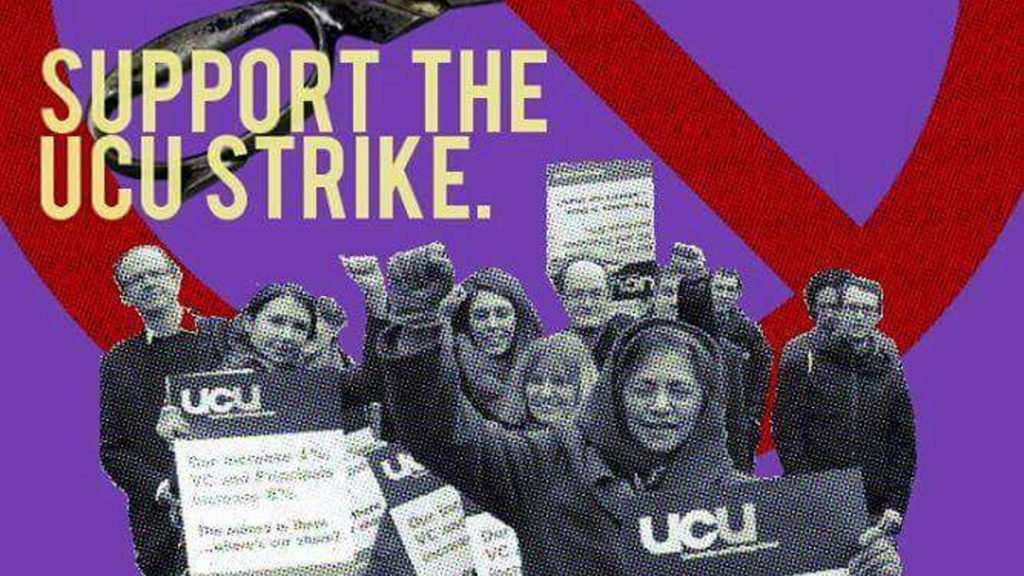 That one comment from a striking UCU member encapsulates the conditions that have driven over 40,000 staff in 61 universities—twelve of them in Scotland—to take eight days’ strike action from 25th November, followed by action short of a strike.

These education workers are walking out onto the picket lines to combat a multitude of ills with the profit-driven, marketised education system. Crucifying workloads; an epidemic of insecure contracts, including zero hours contracts;  collapsing pay; an average 15% gender pay gap; and being forced to pay far more and get drastically less in their pensions.

It’s a brave thing to stand up to your boss and walk out on strike. There is nothing unreasonable about the lecturers’ demands, though greedy Vice Chancellor McCormac would rather tell you otherwise. Stirling University SSP fully supports the strikers and will be taking action to aid their struggle where we can.

The Scottish Socialist Party offers unqualified solidarity to the UCU strikers and the thousands of students actively supporting them. SSP members will build solidarity in our own trade unions, as we did in 2018. Student SSP members are at the heart of solidarity networks, as they were in student occupations in 2018.

It takes a lot of courage and commitment to strike, especially in the run up to Christmas. But the arrogant refusal by the employers to enter meaningful talks leaves no alternative. And this united action will win the support of thousands of fellow trade unionists who recognise the vital struggle involved, on pay, pensions, inequality, casualisation, job insecurity and backbreaking workloads.

It’s outrageous that real pay has been cut by 20.8% since 2009. It’s totally unacceptable that the average UCU member is expected to pay £40,000 more into the pension scheme, but then get £200,000 less on retirement; an overall robbery of £240,000 from their deferred wages. The SSP endorses completely the UCU’s battle for equal pay, against the outrageous 15% gender pay gap in Higher Education. And the SSP have fought for years against the curse of casualisation, insecure work, zero hours contracts—the modern forms of slave labour that are accompanied by systemic poverty pay rates.

Even experienced trade unionists will be horrified by some of the living examples of impossible workload for this casualised workforce in HE, detrimental not only to hourly pay rates, but workers’ mental health.  The example of a history teacher given 30 minutes’ pay (£22.50) to prepare a one-hour lecture, which actually took 2 weeks to prepare! Or the literature tutor paid for 30 minutes, meaning that for the actual 3 hours required to read the book, he was paid £1.42 an hour—even before slashing his hourly rate further for the time it took to prepare, write a plan, make a power point presentation and handouts.

All this amounts to a systematic drive to make education not a service to society, but a source of profit. Cutting pay, pensions and paid preparation time in order to fuel the commerical success of a marketised system – and to fund the grotesque salaries of Vice Chancellors, whose basic salary starts at £250,000, their incomes having risen by up to 77% in the same decade during which staff pay has crashed by over 20%.

A Victory for All Workers

Other workers will readily respond to appeals for solidarity, because we know the UCU battle is part of a wider struggle against the longest, deepest cut to workers’ wages since the Napoleonic Wars! Likewise, the battles against the curse of casualisation of jobs.

The SSP has pioneered a concrete alternative to zero hours contracts. Since 2016 we have campaigned in the unions and on the streets for abolition of zero hours contracts and their replacement with a guaranteed minimum 16-hour contract for all workers who want one. We first won support for this policy in the 410,000-member retail workers’ union, USDAW, and subsequently at the TUC and STUC conferences. Likewise we have pioneered the policy of a Legal Maximum Income, initially set at ten times the Minimum Wage, to help combat inequality.

The SSP is committed to building support for the UCU strikers in other unions and amongst students. We also believe the Scottish government should set an example, as a major funder of Higher Education, and refuse to imitate the brutal austerity agenda of the Tories at Westminster. They should openly back the UCU’s demands and pledge the required funding to implement them.

You can win! A victory for the UCU will be a victory for all workers, against the grotesque exploitation, inequality and stress that is written into the DNA of capitalism.

One thought on “Victory to the UCU Strikers!”