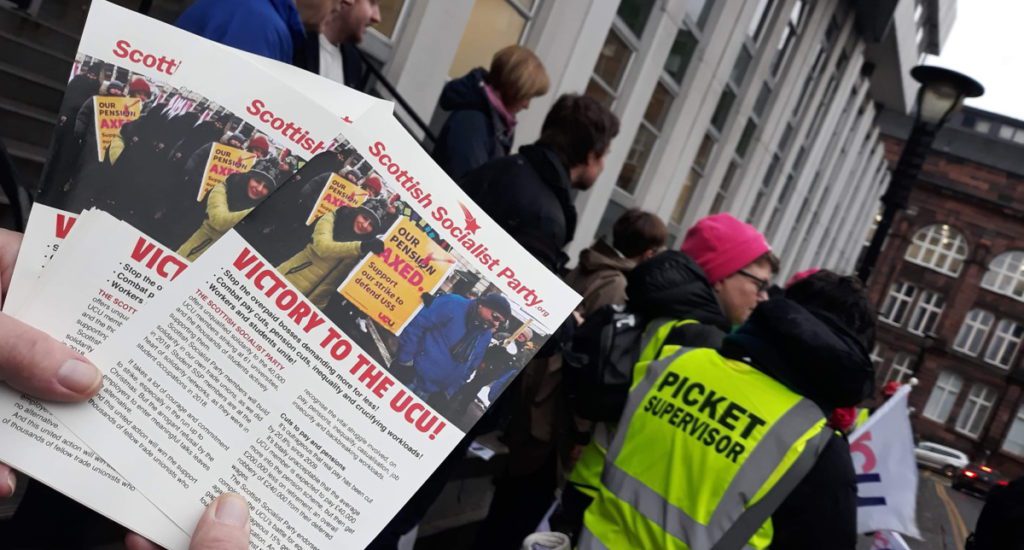 Universities across the UK have been rocked by an 8 day strike by lecturers and other academic related staff led by the University and College Union (UCU).

This massive nationwide action was precipitated by employers failing to implement the recommendations of an independent pension panel set up to resolve the previous dispute from last year. Thanks to a change in leadership of the UCU this year and growing confidence in the strength of local branches, the dispute has been extended to include a requirement for employers to address disgraceful pay gaps for women and BME workers, and chronic increases in mental health issues associated with work related stress.

With the first picket lines assembling on Mon 25th November, all eyes were on the numbers of staff turning out to support the action. Senior employers’ representatives had confidently predicted that the UCU would fail to get the vote out for industrial action in the first place. Having been comprehensively wrong in that prediction, their predictions of limited enthusiasm for picket line duty also proved to be catastrophically wrong. Numbers on the picket lines in 2019 were in many cases significantly up on the previous dispute, reflecting widespread anger amongst workers over employers failing to honour previous commitments.

By day two of the action the employers clearly realised that the action was solid and for the first time conceded that they would have to engage with UCU on casualisation, workload and equality pay gaps. With picket lines holding firm across the country, by Dec 2nd employers were forced to return to the negotiating table. As things currently stand the dispute is not yet resolved. UCU have moved into a phase of Action Short of a Strike and stand ready to get back out onto the streets in 2020 as the next academic term commences.

Across the country, UCU pickets have been overwhelmed by the support they have received from students and sister trade unions. Vocal support from all of the main student unions has been vital in disarming employers attempts to sow division between students and the workers. A series of student occupations of University buildings was a particularly high profile way of conveying their anger, recognising that poor working conditions for staff reflect poor learning conditions for students.

Solidarity visits to picket lines, financial contributions to the strike fund and refusal to cross picket lines – fundamental acts of trade union solidarity – were welcomed by striking workers everywhere. Special thanks goes to postal workers from the CWU who refused to deliver mail to institutions affected by the dispute. In Glasgow, fabulous support from Unison and USDAW colleagues was warmly appreciated by UCU member on cold winter picket lines.

Some may wonder about the working conditions that UCU are protesting about. With their global reputations, surely UK universities must be fairly decent places to work? Here in Glasgow the employer’s PR machine moved into overdrive as the University of Strathclyde was awarded the Times Higher Education University of the Year at glitzy ceremony while staff were out on freezing picket lines. Next morning, striking UCU workers made sure that the truth was laid out on the street for all to see: 21% gender pay gap, 26% BAME pay gap, 41% increase in work-related mental health issues for staff over the last year, 33% of academic staff on casualised contracts. All of this at a time when nearly half of all university vice chancellors earn more than £300k and six earn more than £500k.

And these fat cats know no shame. As this is written, the University of Liverpool is threatening striking staff with further wage deductions if they do not reschedule lectures and other work lost to the strike action. Several other Universities are threatening similar punitive actions.

This battle is far from over. The union is ready to take on the fat cat bosses and with the support of the students and our sister unions, we will push forward for fair pay and pensions, and decent working conditions for all.