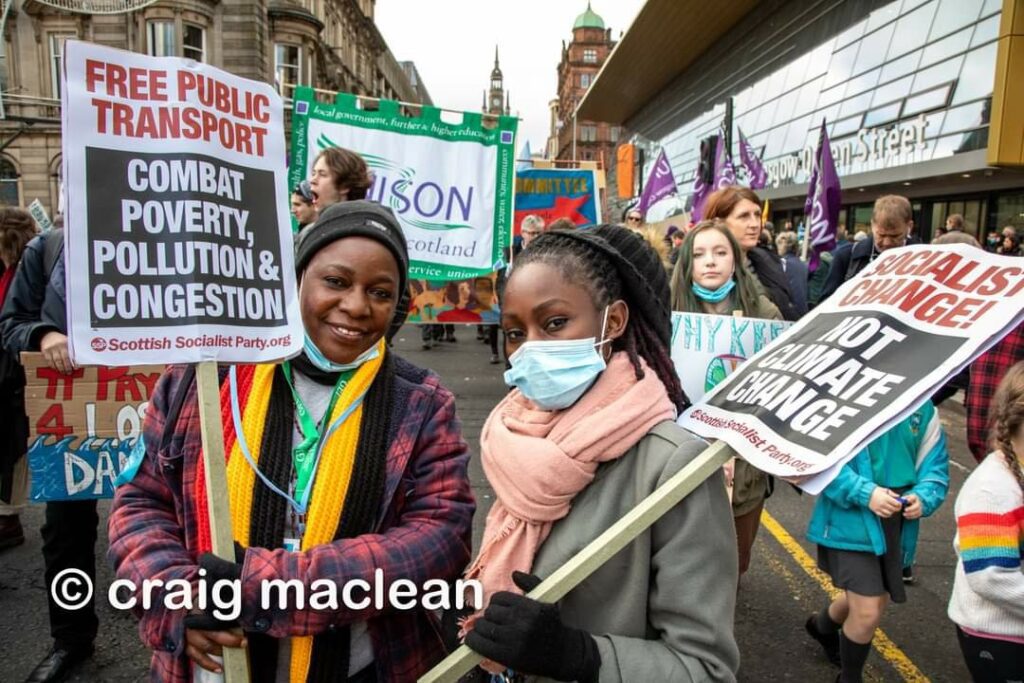 It is “Transport Day” at COP26 – but outside COP’s barriers, people in Scotland still have to endure rip-off fares and fragmented, privatised transport.

The Scottish Socialist Party is calling for free public transport to be extended to everyone in Scotland to cut emissions and reduce poverty.

SSP National Cospokesperson Colin Fox has said: “Solutions to global warming have to make our lives better, not worse.

“One of the things we could try is to introduce free public transport. Give people a better alternative to using their car. Free underground, free busses, free trains.

“It gets people out of their car, redistributes wealth, reduces emissions, and improves the quality of people’s life.”

SSP National Workplace Organiser Richie Venton said: “I’m delighted that the policy which the SSP pioneered and has fought for on the streets and in our unions for the past 20 years has now been adopted as policy by many other organisations and campaigns.

“We were out in George Square early this morning to put this case across as the COP26 hot-air conference discussed transport.

“Free Public Transport is an idea whose time has come – but we’ll need to continue to fight for it. It tackles poverty and pollution, social isolation and inequality.”

SSP National Secretary Hugh Cullen said: “On Transport Day at COP26, and every day, we should be fighting for free public transport.

“Universal provision on this scale requires public ownership and an expansion of the network – an opportunity to create jobs”.

Democratic public ownership can also be used to improve pay and conditions for transport workers – key workers who kept Scotland going during the pandemic.

RMT members on the Caledonian Sleeper are striking from Thursday 11 November to Saturday 14 November, fighting for a fair pay settlement from private operators Serco.

The RMT has accused Serco of ramping up a bullying culture against workers during COP26. At a highly successful SSP public meeting in Maryhill, an RMT organiser on the Caledonian Sleeper backed calls for an overhaul in public transport.

The SSP has sent its full solidarity and support to workers taking strike action.

The call for free public transport was backed by a local bus driver, who condemned the way private bus services have failed Glasgow and failed drivers.