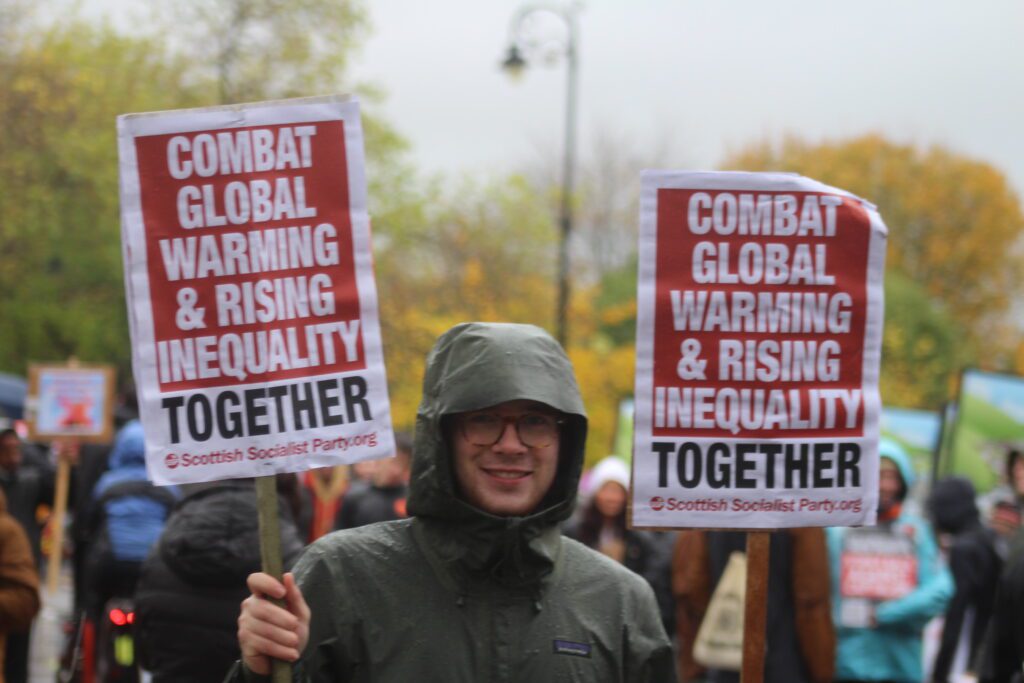 The Scottish Socialist Party is continuing to campaign for a Socialist Green New Deal, free public transport, and a worker-led Just Transition to a sustainable economy on the streets of Glasgow.

Activists spoke to members of the public on a busy Argyle Street, and the overwhelming response was enthusiastic support for change that tackles pollution and poverty together.

On Wednesday 10 November, the “Get Glasgow Moving” campaign and other activists held a rally in Glasgow’s George Square, calling for free public transport in the city.

Supporters of the SSP’s long-running campaign for free public transport included Labour Party members, who expressed their disgust at the direction of that party under Keir Starmer.

The SSP also reiterates its continued support for Caledonian Sleeper workers who are going out on strike tonight against pay cuts and bullying from private operators Serco.

SSP National Workplace Organiser Richie Venton said: “The SSP has been out on the streets on a daily basis during COP26, arguing for measures that will improve people’s living standards at the same time as tackling pollution.

“In particular, we find that people are increasingly aware of the hypocrisy of COP26 delegates getting free, integrated public transport for two weeks whilst the people of Scotland have to pay through the nose for buses, trains, and subway.

“We’re arguing that if it’s good enough to give a free pass to the COP26 delegates to go on the subway, to go on buses – including special fleets of electric buses – and on the train as far as Edinburgh, then it’s good enough for the population.

“Increasingly, that’s winning support as a measure that will combat car pollution, ill-health like asthma, and poverty in the process of also helping to protect the planet.

“Also, we’re fully in support of transport workers who are battling for better wages: whether that be the bus drivers who are currently balloting on the subject, or the Caledonian Sleeper service staff who are going out on strike.

“I would appeal to every Trade Unionist and every decent-minded person to turn out in solidarity with the Serco Caledonian Sleeper workers at Central Station tonight at half-past nine, and again on Friday night at the same time, to show support for these workers who have not had a pay rise – and have had pay cuts in reality.

“Serco are one of two companies that got £36 million off the Scottish Government during COVID, and yet refuse to give decent wages to their staff.

“So we want a fully integrated, publicly owned, free-at-the-point of use public transport system in the same fashion as a free health service, to be paid for the rich by taxation, and which will improve health, cut poverty, and cut pollution.”