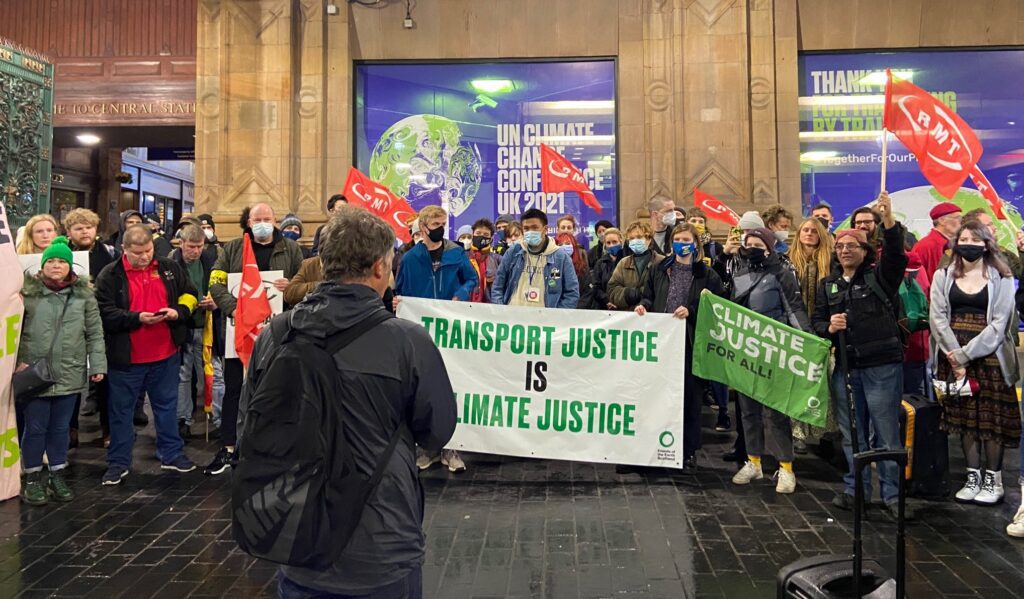 Serco are one of two companies that received £36 million from the Scottish Government during COVID, but are refusing to give decent wages to their staff.

The RMT has accused Serco of ramping up a bullying culture against Caledonian Sleeper workers during COP26.

Striking workers, other trade unionists, climate activists, and supportive members of the public rallied at Glasgow Central Station on the evening of Thursday 11 November. Despite the cold and wet weather, the mood was vibrant, colourful, and defiant – as more and more workers in Glasgow take a stand against poverty pay, poor conditions, and the bosses’ bullying culture.

The SSP has sent its full solidarity and support to striking Caledonian Sleeper workers. SSP National Workplace Organiser Richie Venton was invited by RMT members to speak at the picket line.

Richie Venton said: “I was delighted to be asked by the RMT to speak at the massive solidarity picket at Central station last night, with big delegations of international trade unionists here for COP26, and a lively, dancing team of youth climate activists.

“The Caledonian Sleeper staff need and deserve dignity, a decent pay rise, instead of being treated like dirt.

“As I said in the speech, the ‘hot-air conference’ on the Clyde spouts a lot about cutting pollution. A properly invested, expanded, publicly owned Sleeper service, with a well-paid workforce, could replace much of the short-haul flights and contribute to clean, green public transport.

“We must reject the utterly false choice between good, skilled jobs and having clean air to breathe. The two go hand-in-hand. It’s only if we create hundreds of thousands of new green jobs – including in an expanded, integrated public transport service, free at the point of use – that we will win clean air to breathe. Trade union struggle and climate struggle can and must be united.”