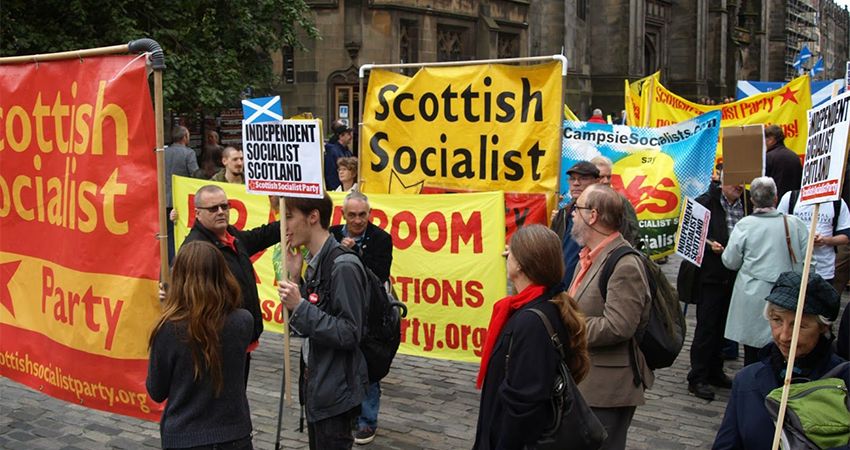 The Scottish Socialist Party is committed to Independence. For us it is the way to radically change Scotland, tackling our low wage economy, the affordable housing crisis and shifting power and wealth decisively in favour of Scotland’s working class majority.

In firing the starting pistol on another referendum campaign today First Minister Nicola Sturgeon is making Scotland’s EU membership the central and overarching issue in the entire debate. It is a risky strategy. For there is a danger it sidelines the real economic and social challenges facing millions of Scots everyday. Securing a Yes vote in Scotland’s working class communities remains the key to winning this referendum. Therefore any campaign must put an inspiring vision of a transformed new Scotland in front of the Scottish people and offer them the prospect of meaningful advance.

We have clearly come a long way from the consensus reached by the Yes Scotland board in 2014 when we agreed we would only propose another vote when we were ahead in the polls and had been for some time.

And why was that? Because we witnessed what losing two referenda in quick succession had done for example to the Independence movement in Quebec. It had killed it stone dead.

Nicola Sturgeon’s big gamble here of course is in making Scotland’s EU membership the overarching issue of the entire campaign.

First Minister Nicola Sturgeon is making Scotland’s EU membership the central and overarching issue in the entire debate. It is a risky strategy.

The Scottish Socialist Party voted to Remain in June 2016 but we did so as the lesser of two evils. The European Union is an anti-democratic bureaucracy based in Brussels utterly beholden to Europe’s neo-liberal corporate elite. We voted to Remain only because ‘Brexit’ was worse, offering a xenophobic cocktail of Little Englander bigotry and backwardness. We believe the majority of Remain voters in Scotland felt the same way.

As far as we are concerned the EU is not the issue to win a second referendum on independence. That victory can only be achieved by persuading Scotland’s working class majority they will be economically, socially and politically better off with self-determination. 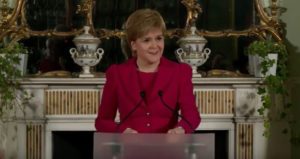 As far as that second referendum is concerned the ball is now in Theresa May’s court. If she says no it will be seen as thwarting the democratic rights of the Scottish people. If she agrees she will be fighting on two fronts simultaneously – Brexit and Scotland’s second independence referendum – and jeopardise ‘the most successful political union the world has ever seen’ as she recently described the UK. Most commentators expect her to ‘box clever’ and play for time. In other words agree in principle to a second vote but use her considerable powers to dictate the timing of the referendum, the question on the ballot paper and the type of campaign to be conducted.

The Scottish Socialist Party want an independent socialist Scotland, a modern democratic republic. And we want it as soon as possible.

It is not a forgone conclusion that a second independence referendum will be won. Indeed when asked the question ‘Do you think you can win this referendum?’ by the BBC’s Sarah Smith, Nicola Sturgeon’s rather unconvincing reply was ‘Yes, but sometimes you’ve got to do what’s right.’ She knows she has gambled on the EU issue being powerful enough to gain support across working class Scotland.

The Scottish Socialist Party want an independent socialist Scotland, a modern democratic republic. And we want it as soon as possible. We will work as hard as anyone to deliver a Yes vote for independence but the tactics we employ in relation to this outcome will need to be discussed fully. That issue will be on the agenda of our Executive Committee this weekend in Edinburgh which will set out our campaigning priorities to win.

If you value the diversity of the Yes movement – consider helping the SSP today.

2 thoughts on “Fox: Prospects on winning a second independence referendum”