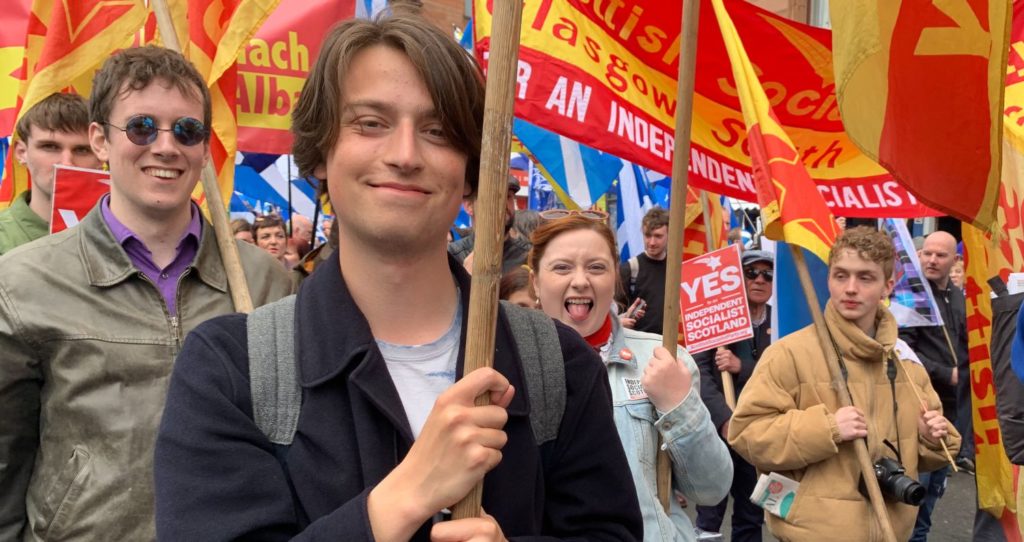 As well as being an international remembrance and of celebration of workers interests – shielding the flame and refueling the fire of international worker solidarity, the May Day weekend has long been a political fulcrum.

Just over 200 years since the birth of Karl Marx, a hundred years since the Red Clydesiders drove home the demand of an eight-hour day, forty years since the hated Maggie Thatcher won power, twenty since Scotland’s devolved parliament was reconvened and five since the polling in favour of Scottish independence began gaining real speed and vigour in the run-up to 2014’s referendum.

While many tens of thousands of working class Scots poured onto the streets of Glasgow for Saturday’s All Under One Banner march, actual political organisations were thin on the ground – sharing the weekend with the May Day and the run up to the European elections has its downside. Nevertheless, it’s clear the independence movement as a whole remains in rude, welcoming, boisterous health.

What struck me most about Saturday’s effort was the sheer number of interested, supportive people on the streets lining the march. Many elderly supporters who couldn’t make the three mile walk joined the procession from George Square, people peeled off and rejoined the march late after some refreshments or best of all, people cheering from and pasting “Yes” posters in tenement windows – places where the acoustics made the cacophony of voices heard for all.

Spirits were high and marchers did not rise to provocation. They drowned out, laughed and blew kisses at the 47-strong fascist pro-Union counter-demonstration. Zero arrests.

Celebratory and affirming high-jinks aside, for the Scottish Socialist Party – we considered it our mission on the march to draw focus on why independence continues to matter, and lay out our day one demands for a newly reborn nation.

In short, what independence is for.

What is independence for?

The key to winning independence is to never forget, and to always press forward on why we need it.

Independence is about the transformation of our economy and society, ending the democratic deficit and the restoration of public goods, rather than the corporate dictatorship of private profiteering.

It’s about seizing the power needed to protect people and planet from all-encompassing capitalism and lifting our million Scots out of poverty. About seizing control of employment law, drawing down a decent minimum living wage and building security and dignity in employment. About banishing the murderous obscenity of nuclear weapons.

A mini-me UK can never do all these things, and the independence movement would be wrong to go this route. An independence campaign with an austerity plan at its core won’t convince enough to win. A different approach is needed.

If you agree with building a socialist, restorative and wholly democratic vision of independence, the time to build readiness for it is now. Join the Scottish Socialist Party, and work with us as we seek to collaborate and build a new Scotland, with economic, social, land and class justice at its heart.

A forward thinking democratic republic where people come before profit. Eyes on the real prize.

Scott Macdonald is the social media co-ordinator of the SSP.