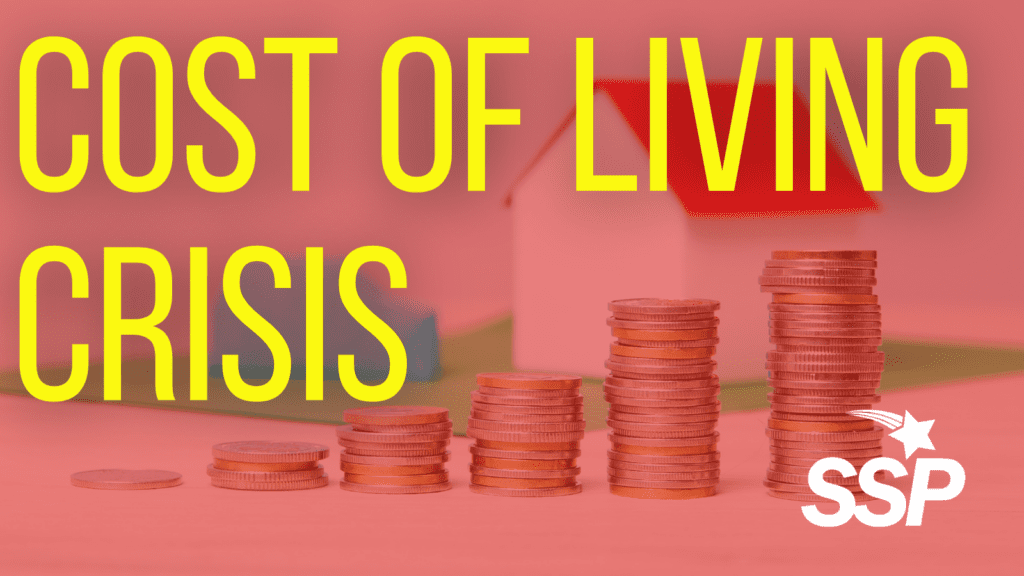 Thousands of workers have turned out in protest against runaway living costs in mass gatherings across the UK.

Organised by The People’s Assembly and trade unions, simultaneous demonstrations took place in at least 25 major towns and cities in Britain.

In Scotland, rallies were held in Glasgow, Dundee, Edinburgh, and Aberdeen.

Scottish Socialist Party members came out to join the rally in Glasgow’s George Square – and spoke with members of the public on Buchanan Street, who demand action against fuel poverty and the rising cost of living.

The UK is facing a cost of living crisis, as inflation and household bills run out of control. Energy bills for the average household are set to rise by around £700 in April 2022.

At the same time, wages have remained stagnant for over a decade – the worst period of wage stagnation in centuries.

“Out blasting the message early today that fuel poverty is the combined result of actions by the corrupt Tories and the grotesque profiteering by big business.

“Fuel bills rocketing by £700 because giant capitalist energy companies made £750 profit, every single second of 2021.

“That’s why people are in fuel poverty. That’s why so many rain-drenched shoppers stopped and added their name to our call for public ownership of all forms of energy – to cut out the profiteering, cut household bills, combat the crime of fuel poverty in energy-rich Scotland.

“And then we joined hundreds of others at the Rally on the Cost of Living Crisis in George Square – with the biggest contingent of any party present.

“The Scottish Socialist Party has joined hundreds of other trade unionists and workers, fighting the horrendous cost of living crisis – the worst in at least 30 years.

“Workers have already experienced about 13 years of wage stagnation and wage cuts – the worst in 200 years.

“We need a programme of emergency action around fighting demands.

“Things like a collective, combined action for pay claims that at least compensate for inflation and for the loss of wages.

“And also measures like demanding the Scottish Government insulate every home free of charge to cut fuel bills, as well as our on-going campaign for public ownership of energy to take the profiteering out of it and cut the bills.

“Instead of paying through the nose for inadequate public transport, we should have an expanded, invested-in, modernised public transport network that’s free at the point of use as a way of cutting poverty, and pollution, and social isolation.

“There needs to be a mobilisation against the cost of living crisis. But unless the working class combines, and fight back alongside those already in action as well as putting forward these fighting demands, we won’t succeed.

“We need to get the Tories out, but we need to replace them with a government that’s prepared to put people before profit.”