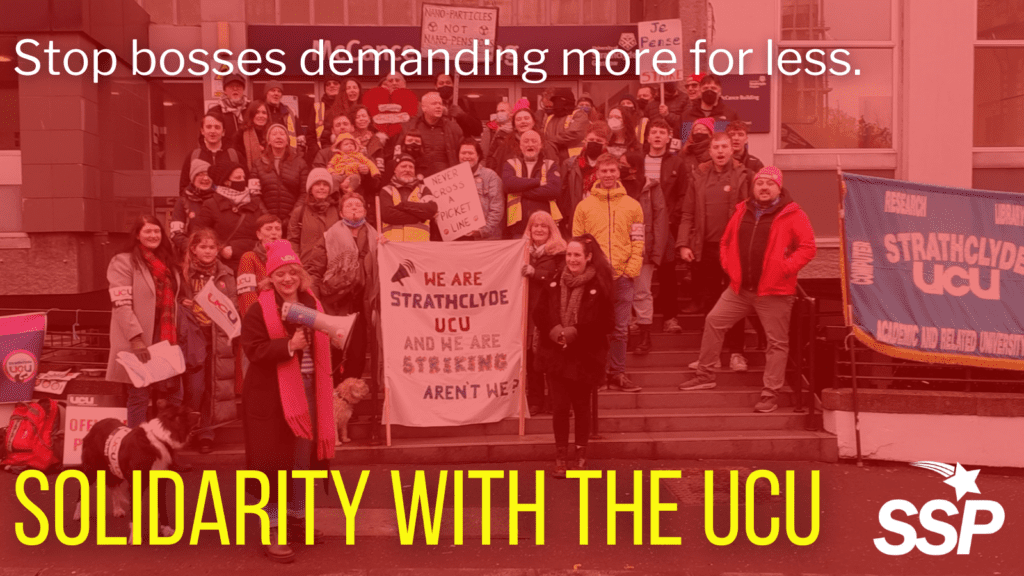 UCU members have launched strike action at Universities across the UK over attacks on pensions and deteriorating working conditions.

Staff at 44 Universities walked out on Monday, 14 February in protest of UUK’s plan to formalise a 35% cut in workers’ guaranteed retirement income.

UUK has ignored the UCU’s fully-costed counter-proposals, which would avoid cuts to pensions and resolve the long-running dispute.

24 more institutions will join the strike on Monday 21 February over a 20% real-terms wage cut in the last 12 years while the average Vice Chancellor income has risen to £269,000.

They are also striking over the growing use of precarious contracts within Higher Education, and over unmanageable workloads that are impacting the health and wellbeing of workers.

50,000 workers are expected to join the strike action, which is to last a total of ten days between 14 February and 2 March.

UCU members are also taking action short of a strike (ASOS), which includes working strictly to contract. In response, vindictive employers have threatened workers with pay deductions – up to 100% in six Universities.

The Scottish Socialist Party has offered its unqualified solidarity to the UCU members taking strike action or working to contract, and to the thousands of students actively supporting them.

The refusal by employers to offer any pay rise despite the cost of living crisis, the refusal to even acknowledge problems like casualisation and precarious contracts, and the refusal to act on impossible workloads leaves workers with no alternative but to take strike action.

The SSP believes that it is simply outrageous that real-terms pay has fallen by 20% since 2009, that UCU members face a 35% cut to their pension – robbery of deferred wages – and that there is still a 15% gender pay gap in Higher Education.

The UCU strike action will win the support of thousands of fellow trade unionists who recognise the common struggles on pay, pensions, inequality, casualisation, job insecurity, and overwork.

The Scottish Socialist Party is campaigning for a higher minimum wage rate at two-thirds of the male median earning for every worker over 16 – rising with inflation.

The SSP also demands action on the dual crises of underemployment and overwork. The SSP campaigns for banning zero-hour contracts, and offering contracts with a guaranteed minimum of 16 hours per week to every worker who wants one.

The SSP also supports implementing a four-day week on five days’ pay, and a maximum income at 10x the legal minimum wage to both curtail excessive Vice Chancellor pay and fund proper pay rises for workers.

“These workers are facing multiple attacks on their terms and conditions. It’s a crime that there is a 35% cut to their pensions – their deferred wages – by the employers.

“It’s criminal that pay has been cut, in reality, by 20% in the last decade – and now, of course, the cost of living crisis is adding to the pressure on the living standards of these workers.

“We also see a 15% gender pay gap 52 years after the Equal Pay Act, which shows that it is necessary to take collective action to force equal pay, and to not just rely on the law.

“We have, on top of that, the creeping casualisation of the entire workforce, where already something like two-thirds of academic staff are on short-term contracts.

“So these workers deserve victory. They deserve solidarity from fellow trade unionists.

“Scottish Socialist Party members in various unions will seek to build that solidarity until they win.”