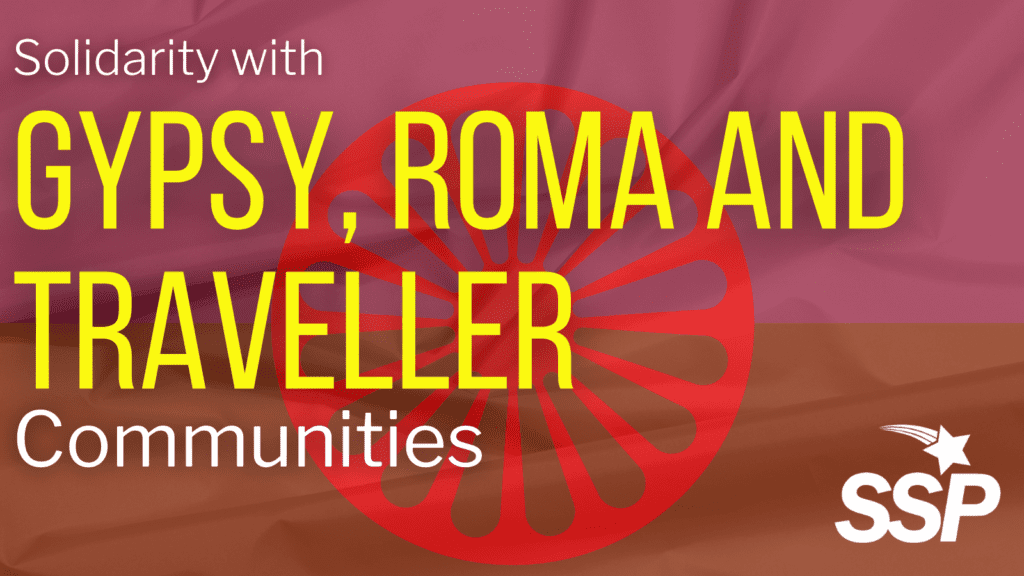 Hundreds of thousands of Gypsy, Roma and Traveller people were murdered in the Holocaust.

The normalisation of hatred against Gypsy Roma and Traveller people in the UK is deeply disturbing. The SSP sends its solidarity to GRT communities.

This article was first released on leftungagged.org

Colin Turbett is an SSP member and a long-time campaigner around social work and social justice issues.

By Roseanna McPhee and Colin Turbett

The recent public spotlight on so-called ‘dark comedian’ Jimmy Carr’s extreme racist comment about Gypsies (their mass murder apparently being the only aspect of the Holocaust the Nazis got right), is just the latest mining of a deep vein of historical and persistent discrimination concerning Romanies and Gypsy Travellers. Legions of mostly anonymous social media stormtroopers have leapt to Carr’s defence, revealing their own disgusting prejudices. No one with any savvy would have had much time for Carr before this. In 2012, having lampooned tax avoiders, it emerged that he was one of the worst offenders, with his use of a very dodgy offshore Jersey-based scheme.

Even the Tory’s David Cameron attacked Carr for taking the public for fools – taking their ticket money and making himself rich whilst giving back as little as possible. The irony here is that working for cash and not paying taxes is one of the stereotypes associated with Gypsies – nonsense in a general sense as many do not earn enough to pay taxes in the first place.

Whilst Carr’s latest filth might not disappoint, it certainly should create disgust. Holocaust jokes are and were never funny – they encourage a racism and division that starts as a joke and ends up in the killing fields of Rwanda and Srebrenica. The Italian Marxist political philosopher, Enzo Traverso, considered Auschwitz (the ultimate death factory where hundreds of thousands of Gypsies perished) proof that capitalism is devoid of humanity: we really have a choice, in Rosa Luxemburg’s words from 1919, of ‘socialism or barbarism’.  Carr’s outburst supports such a view.

Thankfully in Scotland we have not had to endure the ridiculous ‘Big Fat Gypsy Wedding’ type of TV self-parody of our own Scottish Gypsy Traveller community. Characterisations in the media have tended to be more sympathetic and have helped the very gradual process of helping general understanding of how prejudice has marginalised and impoverished this community in plain sight of the rest of us. Gypsy Travellers are still being forced through absence of recognition and facility to give up their identity: designated residential sites are few in number and often sited in areas thought to be unsuitable for mainstream development. Many traditional stopping places are closed off – the process of forced assimilation might not be so obvious, but it continues.

Many Gypsy Travellers hide their identity in order to gain employment and keep this secret from their neighbours and friends. The cost is the loss of an oral tradition of culture and knowledge passed on from generation to generation. The same feature besets those Roma people who have come to live in Scotland because of enduring and dangerous prejudice and impoverishment in their home countries of Bulgaria, Czechoslovakia, Hungary and elsewhere. They have also been subject to damaging and untrue stories about their lifestyles and activities.

We still have a long way to go: Scots Tory leader Douglas Ross might have apologised for his 2017 remarks that dealing with the Gypsy Traveller community would be his number one priority were he Prime Minister for a day, but it was only a few years previously that Scottish Gypsy Travellers established in a landmark employment tribunal case that they are a distinct ethnic minority. This is now recognised and officially accepted by Scottish Government.

Prejudice is not confined to the right wing of politics: in a House of Commons debate in 2008, then Ayrshire Labour MP Brian Donohoe, described Gypsy Travellers as ‘a threat to the community’, echoing the voices of reactionary constituents rather than trying to heal wounds and divisions. Holocaust victims have always argued that the greatest threat to their witness is that they might in time be forgotten, and that we need to make effort to remind new generations of just what horrors people can inflict upon one another if hatred festers to the point that evil, in Hannah Arendt’s words, becomes banal and bureaucratic.

The proper place of historical memory also means facing up to our responsibility for past events. Such an argument is pivotal to anti-colonisation and acceptance that our country was built on slavery. Black Lives Matter have succeeded in popularising this idea and getting new layers of people to think about how Europe gained its wealth and power in centuries gone by. We similarly need to face up to the legacy of past treatment of Scotland’s oldest ethnic minority. One aspect of this is the ‘Tinker Experiment’ launched just after the Second World War which forced a number of Scotland’s Traveller families to move into deliberately sub-standard huts as a pathway to eventual mainstream housing.

Failure to accept risked removal of children, whilst the move, which many families made, brought on a confusion of identity and long-term health issues because of the nature of the discarded and asbestos-ridden huts on offer. The programme was initiated in several locations by a combination of Church and state agencies. Survivors have been calling for some time now for an official apology from the Scottish Government – a call so far ignored. They have amassed evidence that proves that the Experiment that has blighted their lives meets 4 out of 5 of the UN Convention’s criteria for genocide.

From a Gypsy traveller perspective, Carr’s mind-boggling prejudice and hatred only serves to highlight the need to listen to the call for an apology for Scotland’s Tinker Experiment. This baseless, dangerous hatred from someone so far off the moral compass that he views mass murder of an entire race as ‘funny’, completely exemplifies what the campaigners for an apology in relation to the Tinker Experiment have been emphasising – that anything whatsoever which verges upon Genocide is horrific and ought to be challenged publicly by those in positions of power and authority: by a swell of people power.

Informed sources also suspect that Carr himself has Irish Traveller origins which makes his joke an example of self-loathing that goes beyond the self-deprecation that is said to be one of his hallmarks. Franco, the Fascist dictator of Spain, also hid his Gallegos Romany origins and persecuted his own people.

Surely it is time, in the 21st century, that politicians and society alike realised that racism against Gypsy Travellers and Roma should not be, in the words of Alan Miller, ex commissioner of the Scottish Human rights Commission ‘the last bastion of acceptable racism’.