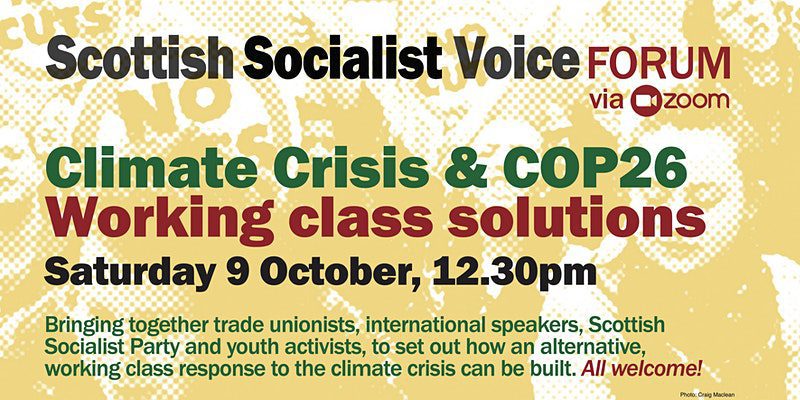 Following Saturday’s highly successful Scottish Socialist Voice Forum on COP26 and working-class solutions to the climate crisis, SSP National Workplace Organiser Richie Venton said: “The Voice Forum was vitally important in giving a voice to those with most to lose from global warming and the most to gain from a clean, green economy.”

SOLUTIONS to the climate and nature emergencies must also improve the lives of working people, trade unionists said over the weekend.

Socialists and activists gathered online on Saturday for the Scottish Socialist Voice Forum, discussing ways to build a mass movement to challenge the control of corporations responsible for pollution.

Chaired by Natalie Reid of the Scottish Socialist Party (SSP), the meeting was held ahead of Cop26, which will be hosted in Glasgow next month.

Ms Reid said she and her party believe the only meaningful way to tackle climate change is through policies which benefit the majority.

Among the attendees was guest speaker Zwelinzima Vavi, general secretary of the South African Federation of Trade Unions.

They were joined by activists from across Scotland, including deputy convener of Unison Scotland Stephen Smellie.

Mr Smellie said: “There was a time within Unison and all trade unions where the subject of climate change was not prioritised, it was not an issue at all. It was for middle-class environmentalists or tree-huggers.

“That has changed — it is now a priority. People understand the link between the working conditions people experience, the value of their wages, and the issue of climate change and what will happen in the future, and that is real progress.”

Richie Venton, forum organiser, said: “The Voice Forum was vitally important in giving a voice to those with most to lose from global warming and the most to gain from a clean, green economy.”

“How Workers Can Save The World: Fight for Democratic Public Ownership to Solve the Climate Crisis and Rising Inequality” by Graeme Cullen is available now.

A mass mobilisation of working people, united in pursuit of a better life, is needed to address the climate emergency and rising inequality. Working people must be the ones to lead this change to ensure a just transition.

The Scottish Socialist Party (SSP) is clear about our principled commitment to democratic public ownership to put people and planet before profit. We proudly campaign for a system that works for all, so that we can build a better tomorrow. The SSP is different from capitalist parties because our solutions to climate change improve the lives of working people. Only a movement that unequivocally puts working people’s interests over those of bosses can end the climate emergency. Only organised fightback through unions, socialist parties, and other working-class organisations can halt capitalism’s destructive ways.

The challenge this pamphlet will address is the need for environmental activists to link the climate struggle with the class struggle through demands that improve the lives of working people.

This is through democratic public ownership of the important parts of the economy that impact the environment. Socialists do not ask working people to make sacrifices, we show how our class has the power to take the wealth we create from those who steal it from us. We understand that it is in working people’s interest to bring about ecologically balanced living through democratic demands that meet people’s needs.