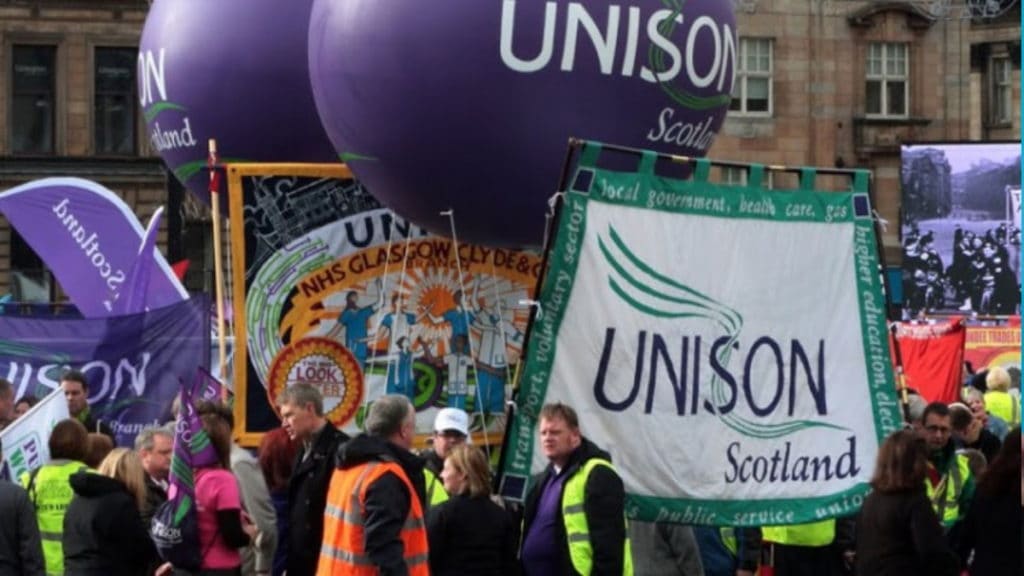 At the Scottish Council of branch delegates in Scotland’s biggest trade union, an overwhelming majority voted in support of a second independence referendum at the time of the Scottish parliament’s choosing.

This is a momentous breakthrough for democracy, from the biggest component member of the biggest civic organisation in Scotland, the trade union movement.

A full debate was held before the vote – with roughly a 3:1 majority – for the Motion proposed by the union’s Scottish Committee,  which reads:

“Unison Scotland was party to the Scottish Constitutional Convention, Claim of Right and acknowledges the sovereign right of the Scottish people to determine the form of government best suited to their needs. Unison Scotland supports the call for a second referendum, at a time to be determined by the Scottish parliament, by means of a Section 30 Order or an amendment to the Scotland Act as a satisfactory means of transferring the power over independence referendums.”

This is a mighty blow in favour of the democratic right to choose; the right of the Scottish people to self-determination.

Of course it is not an actual vote by Unison to advocate independence, but it quite rightly stands for Scottish Unison members and Scottish workers in general having the opportunity to vote on independence, rather than be denied that choice by a dictatorial Boris Johnson government in Westminster.

Unison is now committed to taking this issue into the wider trade union movement, including at the STUC conference in Perth.

In taking this brave and democratic stance, Unison has a ready-made ally in the SSP.

For 21 years since our foundation, we have championed both the right to self-determination and persistently campaigned for an independent socialist Scotland.

Back in mid-December, a few days after the disastrous election of BoJo’s Tory government, I wrote to all trade unions in Scotland appealing for support for an STUC-led demo “in the earlier part of 2020” against a Tory government “with absolutely no democratic mandate to rule and ruin Scotland”, pointing out it was the 17th successive general election since 1955 in which a large majority of Scottish voters rejected the Tories – but are now saddled with this reactionary regime.

In our letter to Scotland’s unions, I advocated an STUC-led demo on several grounds: solidarity with workers in struggle; defence of workers’ rights (against bans on the right to strike); defence of the NHS; defence of migrants from the vicious racism and division incited by government and media. But the final suggested theme of an STUC Demo was to:

“Defend the right of the Scottish people to decide their own future (regardless of your view on independence) instead of having it imposed by a Tory government the Scottish majority haven’t voted for since 1955.”

In articles in The National newspaper and our own Scottish Socialist Voice we made further calls on the trade unions in Scotland to “defend the right of the Scottish people to choose.”

So the SSP warmly welcomes this immensely important, indeed seismic shift in union policy towards the right to self-determination.

And we would repeat our appeal to the entire trade union movement – all 48 affiliates to the STUC – to debate this issue amongst their membership, and stand up for the ABC democracy that the trade unions were in part born to champion: the right to vote!

But as we’ve also written in the articles already mentioned, there is a world of difference between upholding the right to vote on independence – which is a critical issue we hope the entire trade union movement can unite and rally around – and actually mustering a working-class, pro-trade union, socialist case for independence.

That is precisely what the SSP has done throughout our 21 years’ existence, including in our trade unions. After all, unless we convince workers that they won’t be swapping decades of brutal Westminster austerity for a further decade of austerity in an independent Scotland – which is the repugnant prospect on offer in the SNP government’s Sustainable Growth Commission Report – there is not a snowball’s chance in Hell of winning a working-class majority for independence.

Unison Scotland have broken the logjam. The task of all trade unionists and socialists now is to win the same policy of defending the right to choose, the right to vote on Scotland’s future, in other unions. Whilst simultaneously showing millions of working class people there is a force determined to defend their rights, livelihoods and services from the ravages of a Boris Johnson government, including by demanding a union-led Demo that puts thousands on the streets in unity against  minority Tory rule over Scotland.