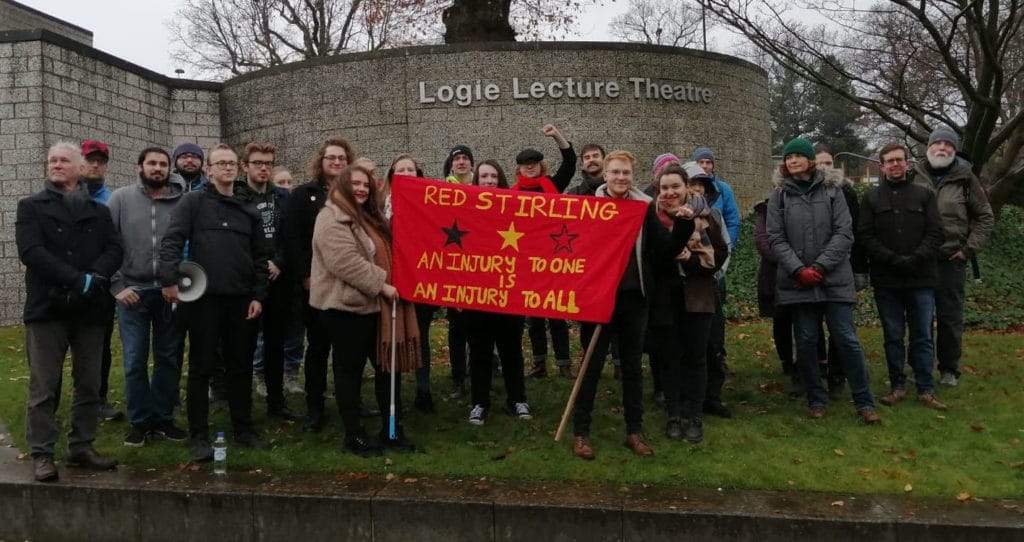 In an outrageous act of repression, the bosses of the University of Stirling have suspended 13 students who staged an entirely peaceful occupation of C-block in solidarity with striking UCU members last November/December.

The young students (including several SSP members) have been suspended from the campus for 8 weeks, banning them from attending lectures, from submitting coursework externally, and even suspending them from their student accommodation.

Not content with potentially making these principled young protesters homeless, the overpaid hierarchy have issued a dictat that they will have to sign in and out and declare who they’re meeting and why – if they need to visit the pharmacy, meet their counsellors and mental health advisers, or go to Airthey Park Medical Centre.

They are threatened with their academic grades being capped, or with being failed, with no guarantee of being allowed to resit courses next year.  And they are banned from participating in clubs and societies, in a crude attempt to further isolate them.

If such brutal measures were issued in another country, the media – and maybe even University authorities – would be denouncing them as the hallmarks of a dictatorship.

Furthermore, this punishment for peaceful protest is sinister in its timing, on two counts.

If the students lodge appeals, but the appeals fail, the suspensions would then shift forward to the peak exam period, thereby threatening the students with outright academic failure.

And the announcement of these atrocities against basic human rights was literally on the eve of the renewed strike action by the same UCU members who the students were occupying the building in solidarity with three months ago; no doubt, designed to crush any renewed student solidarity action with the university staff.

This is clearly an issue that must be urgently taken up by the trade union movement.  It’s an attack on the right to peaceful protest, and specifically the democratic right to display solidarity with trade unionists.

The Tories – and subsequently, New Labour – imposed laws against solidarity action by workers; now these dictatorial University bosses want to outlaw solidarity action by students towards those workers who educate them. They are trampling hard-won democratic rights underfoot.

Bombard the Bosses With Protests!

Bombard Stirling University bosses with demands to immediately drop these vicious punishments, which threaten the students financially, academically, in terms of their mental health and their basic democratic rights.

One thought on “Stand Up Against Repression by Stirling University Bosses”