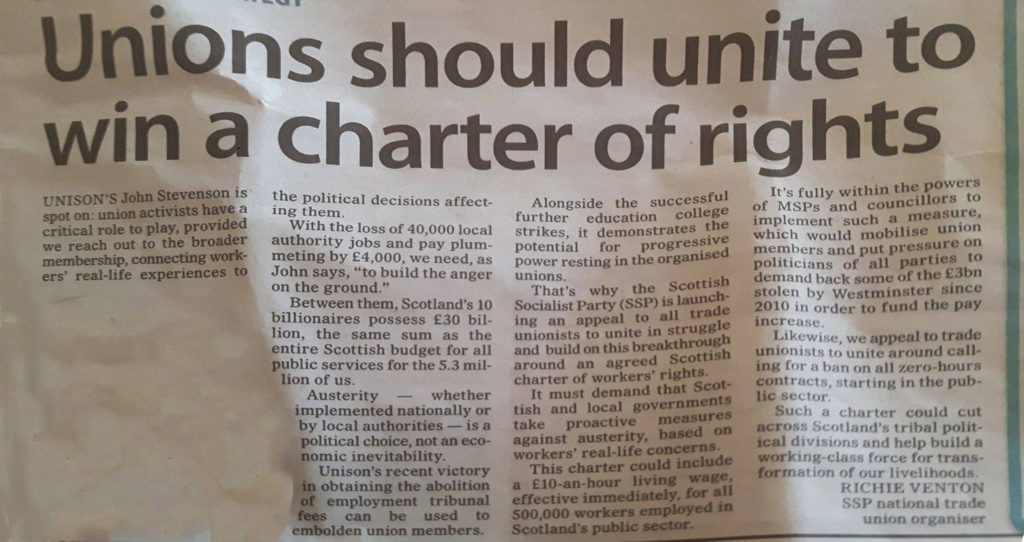 Our workplace organiser, Richie Venton wrote a letter appealing for a united approach from trade unions – the published letter, printed in the Morning Star – is reproduced below.

Unison’s John Stevenson is spot-on: union activists have a critical role to play, provided we reach out to the broader membership, connecting workers real life experiences to the political decisions affecting them.

Between them, Scotland’s 10 billionaires possess £30 billion, the same sum as the entire Scottish budget for all public services for the 5.3 million of us. 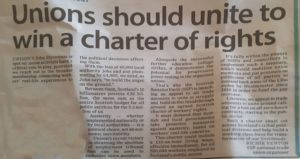 Austerity – whether implemented nationally or by local authorities – is a political choice, not an economic inevitability.

UNISON’s recent victory in obtaining the abolition of employment tribunal fees, can be used to embolden union members.

Alongside the successful further education college strikes, it demonstrates the potential for progressive power resting in the organised unions.

That’s why the Scottish Socialist Party(SSP) is launching an appeal to all trade unionists to unite in struggle and build on this breakthrough around an agreed Scottish Charter of Workers Rights.

It must demand that Scottish and local governments must take proactive measures against austerity, based on workers real-life concerns.

This charter could include a £10-an-hour living wage, effective immediately, for all 500,000 workers in Scotland’s public sector.

It’s fully within the powers of MSPs and councillors to implement such a measure, which would mobilise union members and put pressure on politicians of all parties to demand back some of the £3bn stole by Westminster since 2010 in order to fund the pay increase.

Likewise, we appeal to trade unionist to unite around calling for a ban on all zero-hour contracts, starting in the public sector.

Such a charter could cut across Scotland’s tribal political divisions and help build a working-class force for transformation of our livelihoods.