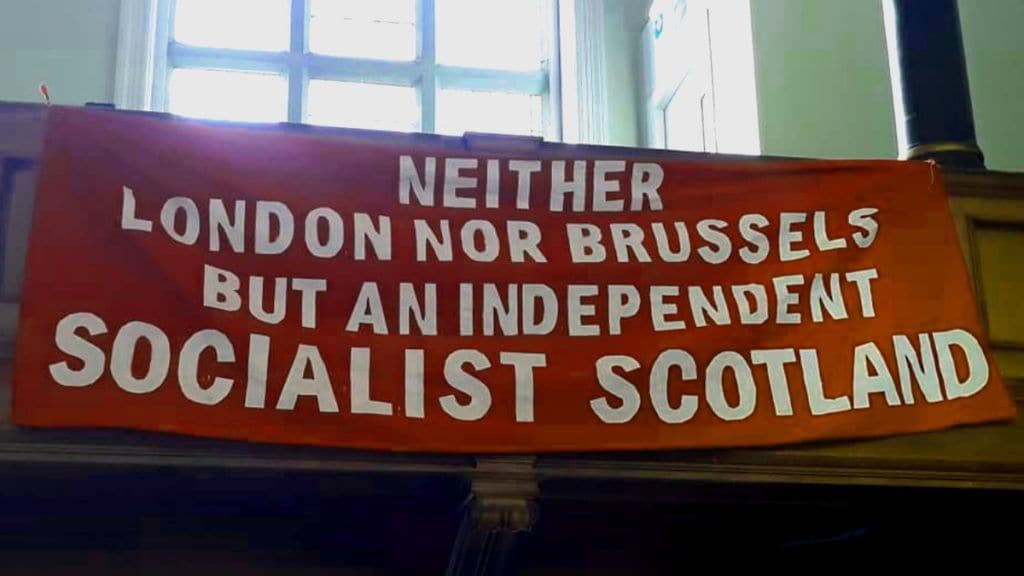 The public declaration in favour of a second referendum on Scottish independence by current general secretary of the STUC, Grahame Smith, is not only extremely welcome, but of profound significance. In truth, Grahame is applying the ABCs of democracy; the right of the Scottish people to determine their own future, rather than have our future dictated by a minority Tory Westminster government with no democratic mandate in Scotland. This is a welcome, long overdue public stance by a leading figure in the Scottish trade union movement. And his call on Scottish Labour to follow suit is indicative of the same upheaval on the national question hitting the beleaguered Scottish branch of the UK Labour party.

Scottish Labour has been hammered by the electorate. Not because the radical social and economic manifesto of Jeremy Corbyn was unpopular amongst Scottish working class people, but because of a growing sense of utter betrayal over recent decades.

They remain unforgiven by hundreds of thousands for their flagrant exercise in collaboration with the Tories in the Better Together lie-machine against Scottish independence in 2012-14. They’ve been punished by swathes of workers for their appalling record of cuts where they’ve run local councils. They’ve been displaced in many former Labour heartlands by the SNP, with their vaguely social democratic message in urban areas, and above all the SNP’s appeal as the biggest anti-Boris Johnson, anti-Tory vote in last month’s general election.

Scottish Labour never enjoyed the Corbyn surge experienced in England, attracting a mere trickle of new members, with the Scottish party remaining generally well to the right of Corbyn’s leadership (except on Trident renewal). Now, UK Labour is being targeted by its own pro-capitalist right wing, the billionaire media (and the actual Tory party!) in a drive to seize back control for a safe, pro-capitalist, Tory-lite leadership—the likes of Sir Keir Starmer or Jess Phillips—after the fright the ruling class got at the popularity of Corbyn’s radical economic policies.

Caught between the hammer of a likely swing back to the right in UK Labour, and the anvil of an increasingly disgruntled Scottish working class who want rid of a Tory government they did not vote for, Scottish Labour is probably sliding towards belated support for a second referendum. And perhaps even something akin to reluctant, half-baked support for Scottish independence, or at least the vague concept of ‘radical federalism’, as espoused recently by some key leftwing figures in Scottish Labour and their outriders in the Communist Party.

But such a shift in Scottish Labour policy would not be based on sound, clean principles. With the honourable exception of the small minority Labour for Independence grouping, it is an act of electoral desperation; at least in many cases, a shameless career-saving adjustment, under the hammer blows of mass rejection by working class voters.

Likewise, it is increasingly likely there’ll be moves towards a separate Scottish Labour party, as already voiced by MSP Monica Lennon and GMB union Scottish secretary Gary Smith. Socialists should welcome such a development, but with our eyes wide open. Unless such an organisational rupture—reflecting  the widening divergence between the politics of Scotland and England—is accompanied by a root and branch departure from decades of Scottish Labour councillors implementing cuts; Scottish Labour MPs voting for savage attacks on the sick, disabled and unemployed in Westminster welfare legislation, and decades of Labour governments retaining Maggie Thatcher’s repressive anti-union laws, it will still leave the working class cold and hostile.

One certainty is clear: up until now, there is absolutely no clear, cogent case for Scottish independence as a route to a socialist Scotland coming forth from any figures in Scottish Labour. And of course that has never been, and will never be the vision presented by the economically conservative SNP, who are currently gloating at being branded ‘Scotland’s business party’, and whose Sustainable Growth Commission Report offers Scottish workers the inglorious prospectus of ten years of austerity after independence.

That socialist marriage of class politics and defence of national rights has been the exclusive mission of the Scottish Socialist Party, for 21 years championing not only the right to self-determination, but the positive case for an independent socialist Scotland, a democratic workers’ republic that puts people and planet before profit.

For decades, Scottish and UK Labour have implacably denied the right to choose for the Scottish people, in contrast to their declarations of the right to self-determination for nations far afield. That was even the case in Corbyn’s 2017 Manifesto, For the Many, Not the Few, which bluntly asserted:

Labour opposes a second Scottish independence referendum. It is unwanted and unnecessary, and we will campaign tirelessly to ensure Scotland remains part of the UK.

Now, 20 or 30 years too late, they may relent. They may concede the right to a second referendum. The trade unions have a particularly key role to play in ensuring Scottish Labour swings over to defending the right to choose. Which makes Grahame Smith’s public declaration in support of IndyRef2 at the time of Scotland’s choosing a warmly welcome move, which all trade unionists should organise and agitate for within their respective unions.

Winning a Majority for Independence

However, there is still a world of difference between upholding the democratic right to choose independence, and advocating a class-based, working class socialist case for independence—in essence, an independent socialist Scotland. But to actually achieve independence is the core task now facing the Scottish trade union movement, especially in the wake of Johnson’s election against the overwhelming wishes of the Scottish people—with a Scottish majority voting against the Tories in 17 successive general elections since 1955! That requires a forceful crusade in the unions, workplaces and communities to convince the working class majority population of the advantages of independence. Self-government for a purpose, based on the material interests of the working class being vastly improved, not for the purpose of swapping flags.

In turn that will not be achieved if Grahame Smith, the STUC or any affiliated union was to merely cosy up and become advocates and apologists for the SNP government. Trade unionists—the STUC included—and socialists need to demonstrate in action that they stand up for working class people,  starting with those already taking action in defence of their pensions, pay, job security and the public services they provide, such as university workers, Royal Mail staff and RMT members on the ferries and railways.

Appeal for a Mass STUC Demo Against Tories

That’s why, the week after the Tories were elected in Westminster, I wrote to the trade unions advocating that the STUC coordinate a Scottish mass demo in the early part of 2020, in solidarity with those workers already in struggle; in defence of workers’ rights, migrants’ rights and our NHS from assault by an emboldend Tory regime, and in support of the right of the Scottish people to decide their own future. Such a mass rally could open up a campaign of concerted resistance to a minority Tory government with no democratic mandate to rule and ruin Scotland.

The trade unions in Scotland need to urgently revisit their positions on the national question in Scotland, which is actually an integral component of all the class questions we need to address. As the biggest civic organisation in the country, by far, the unions should vigorously demand independence from the brutish BoJo regime.  They should spell out a vision of the type of Scotland we want, free of poverty; independent of the growing, grotesque inequality; united against racist divisions and ruthless exploitation for private profit… all of which are the ugly offspring of that monstrous mother of a system – capitalism.

In defending the democratic right to choose, the mass trade union movement has a duty to paint a picture of that future; to present a vision of what an independent Scotland should look like, if it is to meet the needs and aspirations of its overwhelming majority, the working class. And to demonstrate in action that they are fighting for that future! That vision should include a legally enforced Scottish national minimum wage of at least two-thirds the median male wage, rising with inflation; a 4-day week for 5 days’ pay; democratic public ownership of all forms of energy, transport, construction and banking, to lay the foundations of a Socialist Green New Deal that could combat poverty and pollution alike; free public transport and removal of Trident and all nuclear pollution. The STUC, and indeed most of its 48 affiliated unions, already have most of these polices on paper, as agreed by successive annual congresses. They now need to be transformed into living, fighting campaigns, popularised into becoming the property of masses of workers and their families, agitated for in the workplaces, community halls and on the streets.

Grahame Smith’s call on Scottish unions and Scottish Labour to support IndyRef2 is very welcome and very significant. But the trade union movement should not preoccupy itself primarily with the exact timing of such a referendum; rather it needs to convince 500,000 trade unionists and their families of the case for independence, based on a vision of radical socialist change that would transform the lives of millions, through a massive redistribution of wealth and power. In doing so, they have ready-made allies in the Scottish Socialist Party, who for 21 years have stood up for the working class against capitalist exploiters of all nationalities, and argued for independence as an integral part of the struggle for a socialist Scotland.

The immediate task of the STUC and affiliated unions is to link the here-and-now struggles of workers with defence of the right of the Scottish people to decide their own future, and to advocate a vision for a socialist Scotland based on concrete demands around working class rights and living conditions. A mass, STUC-led demo against the Westminster Tory dictatorship would be a fitting start to that vital struggle.