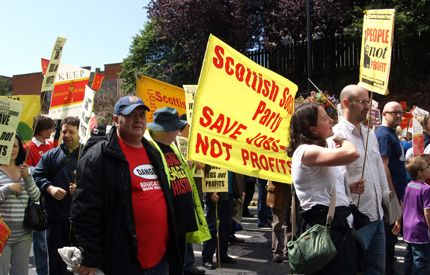 They poured into Howard Park, Kilmarnock, in their thousands on Sunday, despite the monsoon rain and lashing wind that poured down on Ayrshire for hours before. 20,000 of them according to most press reports.

This was the biggest event in Kilmarnock’s modern history, certainly since the town’s team won the cup in 1997. But rather than being a carnival of celebration it was a display of gritty determination to save the Johnnie Walker’s plant from closure.

This is a town of about 50,000 people. The loss of 700 jobs – plus hundreds of others in the knock-on effect – would wipe out any real future for the town, which is already festooned by ‘To Let’ and ‘For Sale’ signs outside shops and small businesses. No wonder such an outpouring of working class solidarity was on display on Sunday.

The entire Kilmarnock FC team and manager Jim Jeffries marched with trade unionists, their families, whole communities, with Johnnie Walker workers present and past to the fore.

Diageo bosses took a pasting from many of the speakers for their disloyalty to a loyal workforce and loyal community, who have given Johnnie Walker’s whisky its international fame, status and sales.

Alex Salmond and others emphasised the alternative business plan which Diageo bosses have promised to look at and discuss, but worryingly Salmond finished his fiery rhetoric with a lame “we will make sure we get something for the workforce” – which begs the question whether the business plan includes big chunks of redundancies rather than saving every job.

By far the most hard-hitting speech came from UNITE assistant general secretary Len McLuskey. And significantly, it was also the best received by the crowd in Kay Park – a clue to the fighting spirits that need to be harnessed into action if the closures are to be halted.

“These are job cuts driven by one thing only: greed. This is a company drunk on greed. It is making mega-profits – more than £2billion last year – and wants still more. It is the greed of a chief executive paid £5m last year and looking to fund next year’s bonus out of the hides of working men and women here in Scotland.

“Well, we have news for Diageo and its boardroom. The days of ‘greed is good’ are over. Unite is not going to accept that these jobs are going and the communities depending on them will be destroyed.

“And we know, Mr Walsh, that you and your managers have been plotting this betrayal for months now. While these workers have been delivering for you day in, day out, you’ve been scheming how to axe them.

“But if this company thinks they can throw hundreds of decent working men and women on the dole without a fight to the end, then they have been partaking of too much of their merchandise.”

“We will discuss the alternative business plan with Diageo, and hope to persuade them to reverse their decision. But be warned: if they don’t, they will face the fight of their life.

“Our union is already in touch with every Diageo plant in the UK and Ireland and we are in touch with the unions in the USA, where Johnnie Walker’s is so widely sold. Jimmy Hoffa of the Teamsters Union has written to Diageo. If Diageo fail to listen, we will hit them hard not just in this proud nation, but throughout the UK, Ireland, the USA, where their sales and their plants operate.”

The warm applause for this fighting talk was consistent with the very warm reception to the leaflet from the Scottish Socialist Party, where we declared ‘Save Workers’ Jobs – not Billionaires’ Profits’. We repeated the same stark, simple message on the hundreds of SSP placards grabbed by marchers: ‘Save Jobs – not Profits’.

And speaking to a large number of Johnnie Walker workers, I found they hold the same basic views of the situation as the SSP. “Profits, greed, making even more money for themselves” were the replies I got from every single worker when I asked them what they thought was behind the closures.

They also agreed with the SSP’s blunt message that the government should not give a penny in subsidies to bribe this mulit-billioned multi-national into saving the jobs. As one woman put it to me: “I would be livid if that government [pointing towards Alex Salmond} gave a cent to these people. They don’t need it or deserve it. Small businesses need help, but not Diageo.”

Our call for the government to seize Diageo’s assets and bring them into public ownership to save every job  – instead of subsidising Diageo’s super-profits from public funds – was well received in conversations with the workers who face a life of misery on £65 a week if this fight isn’t won.

And Johnnie Walker workers I spoke to also endorsed our message that a plan of decisive action will now need to be considered if the monumental public support is not to be ignored by Diageo.

UNITE’s Len McLuskey pointed in the right direction with his speech. If Diageo dig in, buttressed by their billions of profit, industrial action is the most powerful weapon workers have, which could be powerfully aided by a call for a consumer boycott until they cave in.

Sunday’s march through Kilmarnock was a magnificent event, one of the biggest demos of workers in any part of Scotland for years. It will have boosted the morale of Johnnie Walker’s workers, who even on Sunday were getting the kind of treatment from Diageo that has become common as they plot closures. Workers on the Sunday shift were warned against coming out to the demo as it marched past the plant, and they told us their lunchtime was changed to 11.30am to try and prevent them seeing the mass movement behind their fight! To no avail; a crowd of them came out and cheered the marchers on at the gate of the factory, celebrating the strength of unity and working class solidarity.

The roaring success of Sunday now needs to be built on with a plan of action to save every job from the butchers in the boardroom.