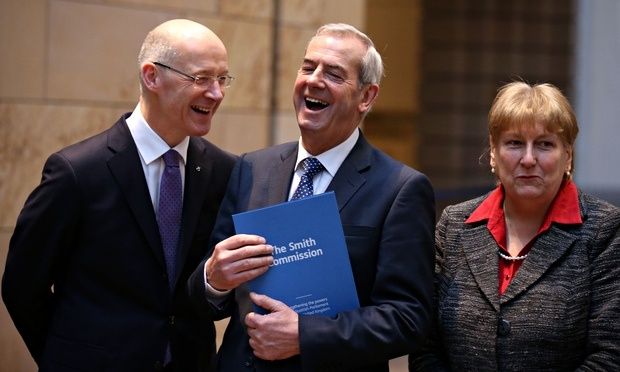 Lord Smith’s recommendations announced today amount to very little. Despite the widespread appetite for change acknowledged by both sides following Septembers historic and far reaching independence referendum The Smith Commission has emerged from the darkness offering very little to satisfy that hunger.

It’s fair to say the Independence movement expected very little from the Smith Commission, but the Scottish Socialist Party, as the only party officially involved in the Referendum not invited to join the deliberations, was certainly expecting more than this.

Lord Smith’s principal recommendation is to devolve Income tax revenues to Holyrood. So the Scottish Parliament is now to be given the power to set the rate of Income tax payable and receive all such revenues raised here. However before anyone gets carried away with Lord Smith’s radicalism it is important to stress this does not in fact mean a single extra penny accrues to Scotland. The revenues received are to be deducted from the existing Westminster Block Grant handed to Holyrood annually under the Barnett Formula. Extra powers over VAT rates and Air Passenger Duty revenues are to be similarly ‘adjusted’.

Holyrood has had the power to vary income tax rates in Scotland by 3p in the £ – up or down – since its inception and never used them.

Whilst the powers to determine welfare policy and to extend the electoral franchise to 16 and 17 year olds are welcome they are hardly likely to satisfy the desire for change now sweeping through Scotland.

It is also necessary to point out that Lord Smith’s recommendations must be agreed by Westminster, a timely reminder of Enoch Powell’s warning that ‘power devolved is power retained’. Mind you given the ecstatic response from Prime Minister David Cameron to Smith’s recommendations you can bet these proposals will be rushed through the House of Commons [and Lords] with much speed and no little relief by the UK political establishment.

The Scottish people on the other hand toiling as they are with the enormous burden of poverty pay, zero hour contracts, indebtedness and fuel poverty are offered no such relief either at Westminster or Holyrood.

But anyone in London or Scotland for that matter who thinks the independence movement will be appeased by these proposals or that the ‘Yes’ mood will subside as a consequence is seriously mistaken. Lord Smith’s proposals fall a long way short of the ‘Devo Max’ or the famous ‘Vow’ promised in the last days of the Referendum by Gordon Brown. They merely whet the appetite of our movement ahead of the Westminster General Election in 6 months time.

You may read the Scottish Socialist Party’s submission to the Smith Commission here.