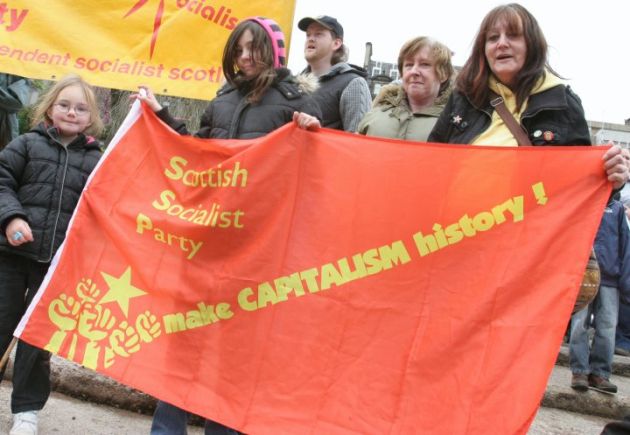 by Gerry McCartney and Wendy Macdonald

At its annual conference in Edinburgh last month the SSP decided to campaign for the introduction of a Citizen’s Income (CI) and to do the necessary background research on the right value of the CI and the best way of administering it.

What is a Citizen’s Income? A CI is a guaranteed income paid by government to all citizens which would replace most existing benefits and would be free from means testing. It would be set at a level for adults above the poverty line and a lower level would be paid for children, normally to the mother.

For those in work, it would form part of wages and result in them paying more tax as a result. There may be exceptions to the replacement of current benefits with a Citizen’s Income such as housing benefit where direct costs are absorbed as they are variable across the country or some specific disability benefits due to particularly high needs of individuals.

There are not many policy proposals that can claim that they would eradicate poverty at a stroke, but CI is one that legitimately can. Because CI would provide sufficient income for everyone in society, young and old, in work or not and without means testing or strings, poverty would disappear overnight.

As with the other pillars of universal public services such as the NHS, the CI would become a source of pride for the population and would send a strong signal that everyone in society is valued no matter their personal circumstances.

The Labour/Liberal/Tory attacks on the welfare state over the last 30 years have meant privatisation, cuts, stigmatisation and the introduction of numerous conditions on social security provision. Much of the universal nature of benefits has been eradicated leaving the door open to attacks on recipients and the outrageous demonisation we see daily across the press. Those on benefits are restricted in terms of the work and volunteering they can do for fear of having their income removed.

The government revels in the Damocles sword of sanctions, deliberately threatening and stressing recipients. How can people flourish in such an environment? With a CI, the entire situation would be reversed. People would have the financial freedom to volunteer, care for relatives or children, learn, or be artistically or musically creative.

There would be the freedom to take work, and only when employers pay sufficiently to make it financially worthwhile thus driving up wages, or not take work, without the fear of sanction. Workers would be able to go on strike since CI forms an automatic strike pay. In essence, CI would provide everyone in society the freedom to flourish, protected from the economic conscription of capitalism.

All of the problems with the welfare ‘reforms’ would be resolved. No more means testing or sanctions, instead universal provision valued and supported across the population as a right of being a citizen. The capitalist parties would balk at the idea of a CI at the kind of level to eradicate poverty.

Why? Well, CI would remove the reserve army of labour that drives down wages. It would take away the very existence of group in society that could be blamed for all of the country’s ills. And to pay for it we would need to massively redistribute the income and wealth of the country. So the CI isn’t going to be introduced without a fight.

Within workplaces the case rests on it driving up wages, since employers will have to pay more than the CI in order to compensate workers sufficiently to make it worth their while. Furthermore, striking workers would have a huge amount more economic power since employers will not be able to starve them back to work.

Amongst those out of work, whether because they are unemployed, sick or disabled, students or retired, the CI would take away the uncertainties and threats from current welfare provision and ensure a stable source of income and hugely popular policy as a result. Even for those in well paid jobs and who own small businesses there is a case.

By providing a stable background income, it would help those starting up small businesses during the initial period. By ridding society of poverty and reducing inequality, it would benefit all in society by reducing all the demands on public spending from poor health and high crime rates which result from unequal societies.

The fiercest opponents of the CI will be those with most to lose—the rich, powerful and wealthy—the natural opponents of the SSP! We will be working up a much more detailed set of briefings for party members in the months to come.