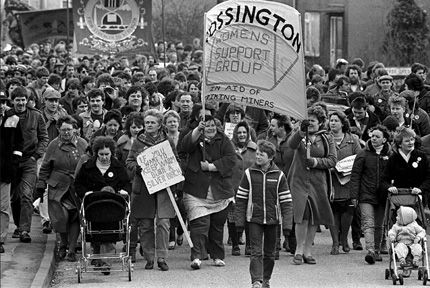 The Moving Finger writes; and, having writ,
Moves on: nor all thy Piety nor Wit
Shall lure it back to cancel half a Line,
Nor all thy Tears wash out a Word of it. – Omar Khayyam

I fear we are about to be inundated by a plethora of post-mortems, a promiscuity of platitudes, and a payola of punditry; none of which will be written or presented by those who took part.

The least biased will present us as the Spartans of the working class marching blindly to our Thermopylae, kinder souls as some hubris-driven Greek hero, charging with a brazen roar to his inevitable doom. The establishment apologists as an unthinking mass cynically manipulated by a ruthless leadership.

None of it true.

There was no inevitability of defeat. If only one (and preferably more) major trade union had joined the action the result would have been very different. Our leaders, whatever one’s personal opinion, led from the front.

There was no unthinking mass, but a gut understanding that the toxic mythology of monetarism would lead to social brutality and economic disaster, not because of any intellectual superiority or gift of prophecy, but because in an old and battle-hardened industry we had seen it all before.

And so it has proved.

Ask any miner who or what was responsible for the defeat, and they will answer, “Mainly the media”. In a dispute that saw the full forces of the state involved this may seem like an oversimplification, but it is essentially true.

No realistic activist expects media support in a strike (unless that strike is in Cuba or Venezuela), but the British media, including the BBC, fell at the first hurdle.

While miners were falling on the field of honour, the media fell at the feet of Conservative Party Central Office. There were a few honourable exceptions, but these were largely ignored. The British media failed in its first duty – to inform the public.

Across Central Scotland and South Wales, and in England north of the River Trent, civil rights were comprehensively suspended. Widespread illegal phone tapping, open denial of access to the public highway, dubious seizure of union funds, arbitrary arrest, kangaroo courts and conveyor belt so-called justice were the order of the day and went either unreported or were openly supported by journalists.

While still hypocritically proclaiming themselves the upholders of freedom of speech, truth, justice and the common good, when the chips were down they stood revealed as a disgusting bunch of establishment bootlickers.

By February 1985, there had been 9,750 arrests, 10,335 charges, 4,112 convictions, 152 jail sentences, 776 sackings, uncounted injuries to miners, and 3 deaths. 1984-85 saw the relatively smooth introduction of police-state mechanisms into large areas of British society. It could happen again, it could happen to you, and a majority of the media would stand idly by, or even applaud.

Monetarism cannot countenance such a voice when, like Walt Whitman, “We did sound our barbaric yelp across the rooftops of the world.” The full forces of the state were mobilised and we became, in the words of Thatcher, “The enemy within.”

I could say a great deal regarding the failure and even treachery of other unions. I could discourse at length on the merits, or otherwise, of holding a ballot. I could pontificate on the myopic cowardice of the TUC, which failed to see the dangers on the horizon while rank and file miners saw it with crystal clarity.

I could analyse the lessons learned by thousands, of the role of the state and the media, but I leave that to others. For the purposes of this anniversary, old comrades ‘Tis of thee I sing, for no doubt those of us who are left will march again.

Many will be missing, but we who remain will march with pride, like the day we marched back, “With our banners torn but flying and streaming like a thunderbolt against the wind” (Byron).

That wind was monetarism and our pride rooted in the knowledge that we saw its deadly future and alone stood against it.

Comrades, beware on this anniversary; let there be no silver wedding.

Pundits and politicians will attempt to appropriate your history; they will distort your struggle, and malign your motives.

They will mouth fine words about a struggle they did not and could not endure, and finer words of a comradeship they cannot even begin to understand. They will flatter that brilliant star of the strike – the Women’s Support Groups.

Tell them that at the end of that grim year when the old lion was down and the jackals were snapping at his flanks, you still had a comradeship that will endure forever.

For when all seemed lost and the Spartans abandoned and alone, that comradeship sustained, It was our song in the Greenthorn tree, Our harp by a silent well,
The wind that shook the barley and will remain locked in the iron bars of memory.

WITH rue my heart is laden
For golden friends I had,
For many a rose-lipt maiden
And many a lightfoot lad.

By brooks too broad for leaping 5
The lightfoot boys are laid;
The rose-lipt girls are sleeping
In fields where roses fade. – Houseman

Dusty Miller was lay secretary of the NUM branch at Kellingley Colliery, Yorkshire, then the bigget pit in Britain, when the strike began in 1984. Here he gives his reflections on the struggle. Dusty describes himself as a “Retired Miner (and Endangered Species)”.