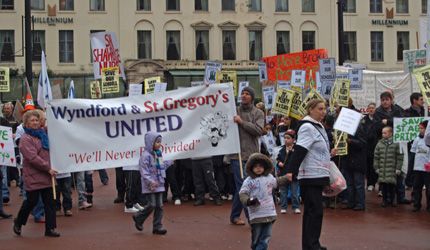 They poured into George Square from the four corners of Glasgow, a human tide of anger, noise and colour.

You could hear them long before they marched into the Square to assemble for the Glasgow Save Our Schools Unity March. The full-throated voices of young children mingled with the chants and singing of parents, grandparents and people who simply care about their communities. “Save Our Schools” and “We shall not be moved” were the most common songs and chants.

Over 200 marched from St Gilbert’s and Barmulloch to the assembly point. Other feeder marches thronged into the city centre from each of Victoria in Govanhill, Ruchill and Wyndford.

In total well over 1,000 gave voice to pure rage at the Labour council’s plans to butcher 25 primaries and nurseries.

It was easily the most colourful march in the city for years, and the noisiest by a mile. It had parents and grandparents, primary and nursery kids, toddlers in buggies. Overwhelmingly they were ‘first-time marchers’. Most were carrying placards and banners, or pumping up the volume with whistles. It was wall-to-wall working class in composition – the very people who for decades have elected Labour to their power, perks and privileges.

After the feeder marches arrived, we held noisy chants aimed at the busiest traffic along the Square, as others arrived. We then organised a march round the entire inside of the Square, snaking its way all the way round, just to get warmed up before marching round the city centre route. Tourists on the City Tours bus took photos of us as we used the megaphone to “Welcome you to Glasgow, the city of Labour cuts to children’s education.”

Two schoolboy pipers proudly led the crowd, followed by kids eager to gallop the entire route! A vast array of banners and placards – from schools, nurseries and the Scottish Socialist Party – made the message clear to on-looking shoppers. At several busy junctions, crowds of several hundred stood and applauded the march, some even responding to our mega-phoned appeal to join in.

The finishing rally was a powerful display of passion and unity. The Glasgow-wide Save Our Schools campaign had agreed to invite somebody from each school or nursery to speak, plus three people on behalf of the three political parties who have been involved in the battle from day one: Green Party councillor Danny Alderslowe, SNP MSP Bob Doris, and Richie Venton for the Scottish Socialist Party.

Every one of the speakers was repeatedly, warmly applauded. Mums, dads and grannies stood up on the statue we used as a platform, passionately denouncing the Labour council for its plans in their area. The most moving part of the rally was when 8 or 10 young children, all of primary school age, made a series of short speeches, to the delight of their mates and the 1,000 people packed into the Square.

This demo has vastly boosted the morale of people up in arms in their own areas, determined to beat Labour’s closures. They know the value of unity in action, and the Glasgow-wide Save Our Schools campaign will seek to coordinate further actions to beat back the demolition squad in the City Chambers.