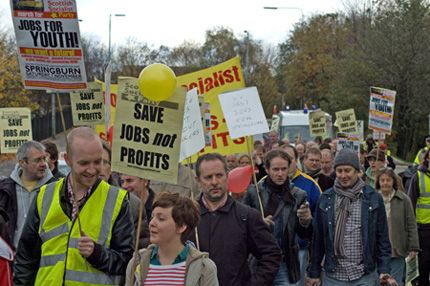 That’s the estimate of the jobs that will be lost in the UK with the cuts in public spending planned over the next few years proposed by the three stooges: Darling, Osborne or Cable – about 100,000 of the jobs would be lost in Scotland because of its’ disproportionate bigger public sector. It’s not come from some “wild” socialist economist but from the respected consultancy group, Capital Economics, headed up by Roger Bootle. Roger’s group were one of the few to predict the “credit crunch” and the bursting of the property bubble. Roger is the former chief economist of HSBC bank and is a current advisor to the House of Commons Treasury Committee and a former advisor to Conservative Chancellor of Exchequer Ken Clarke.

What are the three stooges planning for us? Well we did not find out in their recent televised debate. In fact all that we found out was they were all going to make cuts. Here’s a brief summary of the debate with the gaps filled in or highlighted.

He claimed he would half the annual deficit within four years. He planned to do it by raising taxes by £19m a year and putting up national insurance. What he did not spell out was that he was freezing the tax bands – effectively a tax rise for the low paid – and putting up national insurance which has a ceiling and is therefore a regressive tax on the lower paid. He could have raised £150bn a year by a progressive tax on the rich wiping out entire the deficit in 6 years.

He’s going to of course make big cuts in services and this he hopes will reduce the deficit by two thirds of his target. This amounts to a sliding scale of cuts climbing to £60 billion by 2014. But these plans are vague in the extreme and are based on growth forecasts way in excess of the consensus even from city economists.

He’s earmarked some capital spending cuts on roads, hospitals and schools but no specifics and pay cuts for public workers. But on top of his vague plans he has top find another £23bn of annual cuts. He has said he can save £11bn through efficiency savings – read job cuts – but again not how.

Osborne wants to make deep cuts now and says that they will be severe enough not to put national insurance up next year. After supporting spending when the economic crisis broke he now says he will cut faster and deeper than Darling but again no specifics. He would hold an emergency budget within 50 days of taking power.

Stooge No 3: Vince Cable
Says there has to be cuts but there are no details. Some specifics on tax cuts for the lower paid and vague outlines of plans to pay for it by taxing the better off. Cable has used lots of tough language on the cuts a la Osborne but apart from scarping Trident there are no details. He would have an emergency budget in June to determine what these big spending cuts would be.

The SNP and the Three Stooges

Alex Salmond has made some vague demands about fair funding, protecting front line public services and bring forward capital spending from 2011/12 to 2010/11 – robbing Peter to pay Paul. He has demanded full fiscal autonomy for Scotland but refuses to introduce a local service tax or a progressive national tax all of which could offset the cuts in central government grants. Instead he has chosen to freeze council tax over the last two years which have proportionately benefited the better off and been New Labours administrator of the cuts in Scotland.

Of course there is an alternative which is to make the people who caused this crisis in the first place to pay for it – that is the rich and the bankers.