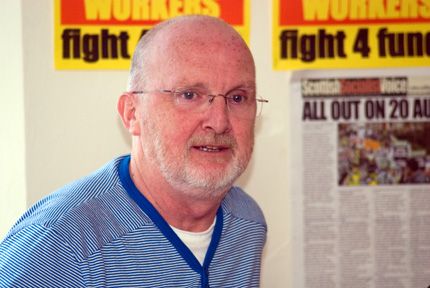 Free speech on West Dunbartonshire Council is a thing of the past if you try to protect Council worker’s pay and conditions.

As a Scottish Socialist Party Councillor I instinctively worked with the Trades Unions against the SNP Council’s imposition of cuts in workers wages and conditions.

To be suspended for 9 months from all Council meetings for trying to defend free speech and the rights of workers is outrageous.

The “Independent” Provost who is joined at the hip with the SNP administration to safeguard the gold chain round his neck, denied any opposition Councillors the right to speak up against savage cuts, imposed, by the SNP on low paid workers. Low paid women workers were denied millions of pounds in back pay they were entitled to by the SNP and the cabal that runs the Council.

It was very clear at the hearing that suspended me for 9 months that at least two senior officers and two SNP Councillors were “economical with the truth”. Mr McMillan, the CEO, changed his evidence against me when he was put in the witness box and took the oath. Two Solicitors led the prosecution against me yet I had to defend myself because I am a full time Councillor with no second job and could not afford to be represented by a Solicitor. Is this justice?

As a socialist I accept having to strive daily to get my point of view across, but as a democratically elected Councillor I should in the context of WDC be playing on a level playing field this is not the case and the “establishment” on the Council operate in such a manner as to deny you the right to free speech, you are effectively silenced if you show any Solidarity with workers, tenants or wider community groups.

The messages of support I have received from workers, tenants and activists has been tremendous. The four main Unions on the Council, Unison, GMB, Unite and the EIS have drafted a petition calling for my suspension to be quashed to allow me to continue my full range of Council duties as an elected Councillor.

It is heartening there is so many individuals and organised local groups who see the injustice in my suspension and the need to defend free speech and rights of democratically elected Councillor’s to support and show Solidarity with oppressed workers.”