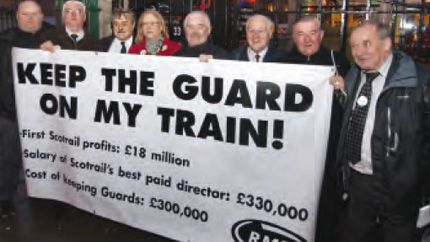 The SNP government has been caught with their hands in the taxpayers’ till, dipping into public funds to bail out a multi-millioned strike-breaking company that wants to endanger the safety of its workers and the public!

During the current strikes by First Scotrail guards/conductors, against the imposition of Driver Only trains, the RMT union met with SNP Transport Secretary Stewart Stevenson. He assured the union their case was well-founded, that the £300,000 cost of putting guards on the new Airdrie/Bathgate line is negligible within the overall £30m budget.

But now it has been proven the SNP government agreed to Driver Only trains a full year ago.

In February 2009, First Scotrail wrote to the Scottish Government, explaining their intentions to introduce Driver Only trains, warning that the RMT was opposed and strikes were likely, moaning that with only four years left of their franchise they could not recoup the losses this would incur, and therefore would have to agree to guards on the trains – unless the government was prepared to compensate them – subsidise them against strikes! The SNP government’s reply confirmed Driver Only Operations should go ahead and gave the strongest possible hints they would compensate First Scotrail out of public funds for any loss of income caused by strikes against this assault on public safety!

In January this year, Scotrail asked the SNP government for £300,000 to ‘train’ and deploy staff to scab on the RMT members’ strikes.

As one Scotrail guard told me, “This is outrageous. The SNP tell us tough decisions have to be made about public spending, yet they are prepared to subsidise a company that made over £18m profits last year to break our strike.

And to add insult to injury, the SNP Transport Secretary who has sneaked behind our backs to collaborate with big business First Scotrail, Stewart Stevenson, is an RMT sponsored MSP! It just goes to show that SNP are as bad as Labour, they put big business profits before the safety of the public and workers’ needs.”

And as another Scotrail guard put it, “Are we striking against Scotrail, the SNP government, or both? This reinforces the need for nationalisation of the railways; at least then we would know who we were dealing with.”

This revelation comes as Scotrail workers fight on in defence of public safety, in the teeth of vicious media distortion, and are being joined in action by Network Rail workers. The latter are resisting 1,500 job losses – the jobs of people critical to public safety and workers’ safety: those who inspect and repair signals, tracks, overhead lines, level crossings.

As a Network Rail worker told me, “They want to cut the size of the teams, and even to bully signallers and maintenance workers into working alone – which is a life-threatening breach of safety rules. The cuts they are threatening would mean people working 39 weeks of night-shift and 39 weekends – hardly good for your health or social life!”