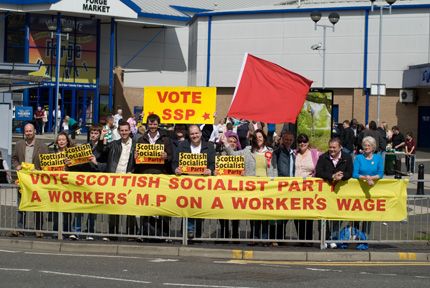 In contrast to the discredited expenses system which has so revolted the public all our SSP candidates will be standing on a platform of only accepting a skilled worker’s wage not the lottery winners lifestyle of current MPs.

These contests mean that the SSP will challenge two key figures involved in Labour’s cuts and war policies–Chancellor Darling in Edinburgh and Overseas Development Secretary Douglas Alexander in Paisley.

Our challenge to SNP Westminster finance spokesman Stewart Hosie will increase the pressure on the SNP to tell voters how they will translate words against the cuts into action to defend jobs, services and communities.

On May 6th voters will be offered a dismal choice of cuts, sackings and war by politicians polluted by the duck houses and mortgage expenses scandal.

All three Westminster parties are in race to see who can cut deepest while the SNP wring their hands but will cut services while blaming London.

These cuts will decimate vital services and directly threaten the jobs of 100,000 Scottish workers.

In contrast the clear message from the Scottish Socialist Party is that there is an alternative which insists that the greedy rich pay for the disaster they created, ends our involvement in the Afghan war
and offers jobs and justice not misery and war.

“The key message from the SSP in this election is that there is an alternative to the cuts sackings and war on offer from the other parties. We will demand that tax dodging by the rich which costs a massive £135 billion a year is ended and troops are pulled out of Afghanistan.

“In the choice between the greed of the rich and the needs of the people we stand for jobs and services and making the rich pay for the economic mess they have created.

I look forward to debating these ideas with Chancellor Darling who has shovelled billions to bankers while supporting cuts in services.”

Frances Curran, who is to contest Glasgow East said :

“This election is the opening shot it what will be a battle to protect and expand jobs and services opposing cuts and sackings to bailout the super rich.”

“The message the SSP will take in our campaign from Aberdeen to Paisley is that lack of money is not the problem, it is that it is held by a tiny greedy minority. Working people did not cause the banking crisis and should not pay for it with their jobs and services.’