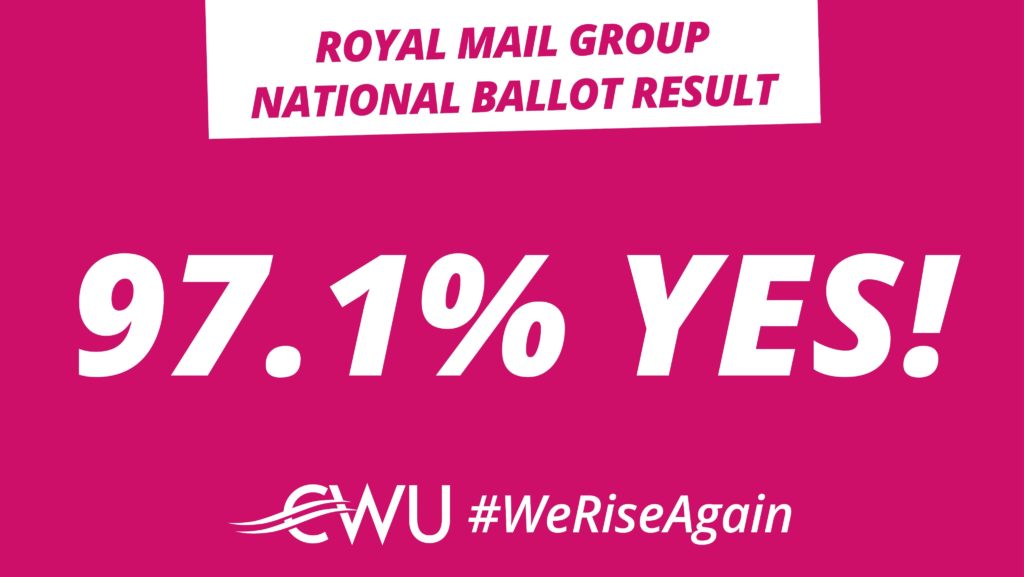 Royal Mail Group workers have delivered a record breaking majority for strike action in defence of jobs, working conditions and the public service they proudly deliver.

In the Communication Workers Union (CWU) ballot of about 110,000 members, a stunning 97% voted yes to industrial action, in a tidal-wave turnout of 76%. In the legally-imposed separate vote amongst Parcelforce members, the plan for collective action won 95% support. Workers cheered the announcement of the ballot results, union flags aloft, in proud determination to win.

These figures are a breathtaking confirmation of the anger and determination of posties to halt the sabotage of the 503-year-old service by a gang of profiteering despots who are simply out for fast-track profit, regardless of the consequences to workers and communities. The sweeping majorities were clear to see coming after the powerful series of workplace meetings, where the issues were clearly spelt out by union organisers, followed by queues forming to cast their votes.

These votes—which contemptuously brush aside the Tories’ thresholds designed to block union action—are a measure of the anger at the cavalier disregard for the Four Pillars Agreement signed in 2017 between the CWU and Royal Mail Group Board—accepted by an 89% majority in that year’s CWU ballot. The new raft of Royal Mail bosses have shredded that agreement, in their plans to hive off Parcelforce as a separate company, thereby cutting 20,000 jobs and ushering in casual labour on worsened conditions. They likewise want to abolish the Universal Service Obligation, enforced by Offcomm, which guarantees 6-day letter delivery throughout the UK for the same price. As if to confirm the CWU’s worst warnings of the threat posed, the latest edition of the Sunday Times published the opinions of City of London analysts:

“City sources reckon the Royal Mail board is preparing for inevitable changes, which could see RM reduce deliveries to five days a week or fewer. Dropping to five day deliveries would cost 20,000 jobs.”

Posties’ anger is further inflamed by pleas by the bosses that they can no longer afford to implement the one-hour reduction in the working week, en route to the 2017 Agreement for a maximum 35-hour week without loss of pay—in sickening contrast to the new Chief Executive Rico Back’s lifestyle. He got a £6m ‘golden hello’ to take on his post on an annual salary of £2.7m, as he jets in from his luxury apartment in Switzerland, overlooking Lake Zurich. Meantime posties traipse around in all weathers to deliver an invaluable public service.

Their readiness for action has also been kindled by a culture of bullying and top level spying on them, with tracking devices within their scanners which monitor workers’ every move. As the CWU Divisional Officer for Scotland and Northern Ireland, Tam Dewar, today expressed it: “Royal Mail workers are tired of boardroom greed while posties are tagged like common criminals.”

This whole battle highlights the monumental failure that is privatisation. This is a battle that could prove bitter, unless the overpaid bosses retreat immediately.  Strikes in the run-up to Christmas, or around the profit-feeding frenzy of Black Friday, would have a powerful impact. Unless the millionaire bosses climb down, strikes look certain and will be an acid test of the readiness of the wider trade union movement to build solidarity for a speedy victory.

The SSP is ready and willing to build for that solidarity, alongside fellow trade unionists and wider communities, whilst we continue to highlight the overwhelming case for democratic public ownership of all postal and telecoms services, with majority control by elected workers’ representatives.

History has been made. The posties rise again! Stand by your posties in defence of jobs, conditions and services!

Richie Venton is the National Workplace Organiser of the SSP.

One thought on “Support Your Striking Posties”