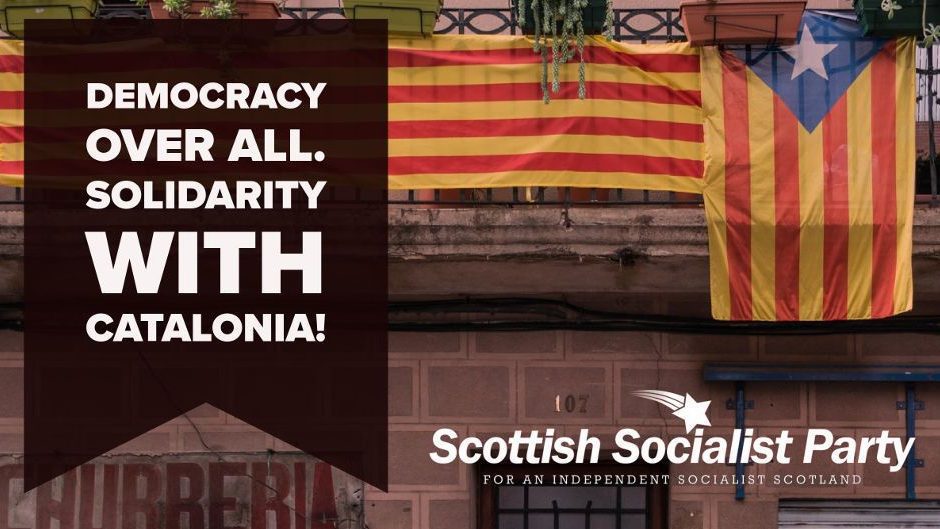 The Scottish Socialist Party strongly condemns the jail sentences handed out to Catalan parliamentary leaders by a court in Madrid. In a show trial reminiscent of those carried out under the criminal dictator General Franco; the verdict was never in doubt. It never is in a kangaroo court.

I was in Madrid last week while the court proceedings were taking place. Despite wrapping itself in legal terminology this was an entirely political trial. Urged on by the more rabid sections of the Spanish media  the Spanish state was making an example of the Catalan leaders in order to make a more general statement. Catalonia belongs to us and if the Catalan parliament and people don’t like it they know where the can go.

The crisis was sparked two years ago when the Spanish Government refused to sanction a referendum on the future of Catalonia despite the Catalan parliament having a clear and democratic mandate to hold one.

When that parliament, having exhausted every legal route, decided to hold one anyway the faced violent repression by the Civil Guard. These had been mobilised from all over Spain, pumped up into nationalist fervour then sent into Catalonia like an invading army. They are still there in force.

Following the suppression the elected leaders where arrested, jailed and now sentenced to lengthy prison sentences under charges of sedition. Again, it should be stressed. These are the elected leaders of Catalonia carrying out the democratic instructions of the Catalan Parliament.

It should also be noted that when I was in Madrid the outcome of an investigation into the actions of the Civil Guard during the attempted referendum was released. Not surprisingly the Civil Guard were completely exonerated and praise for their actions in defence of the Spanish state.

The Scottish Socialist Party stands in complete solidarity with the imprisoned Catalan leaders and in the wider struggle of the people of Catalonia to decide their own future. It calls on the Scottish Government to issue a clear statement of condemnation and to express it solidarity.

It also calls on the EU to desist in its policy of looking the other way when it comes to Spain. More specifically the Scottish Socialist Party will be in contact with fellow socialists in Catalonia to explore what further actions can be taken.