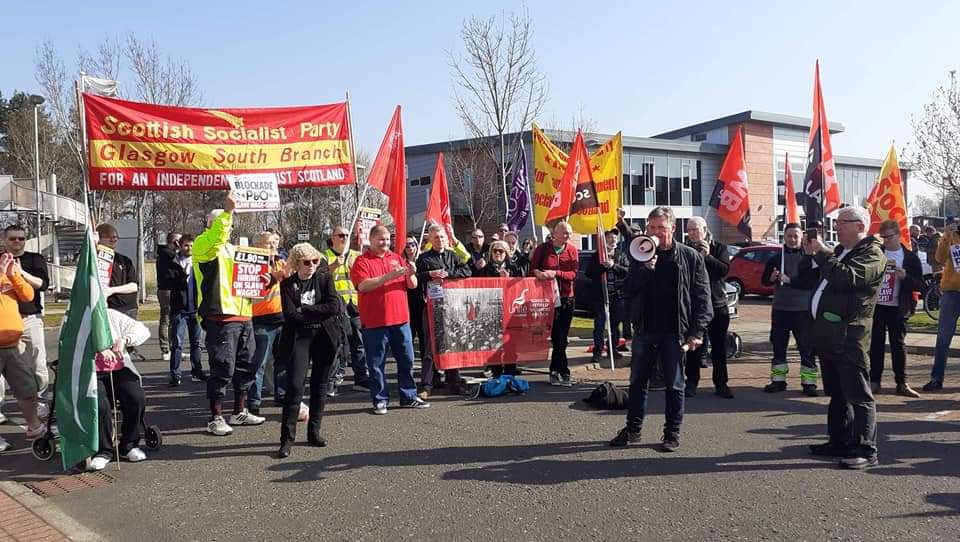 The Scottish Socialist Party has sent its thanks to everyone who volunteered their time and energy to support our 2022 local election campaign – and to everyone who cast their vote for SSP candidates.

The fight against cuts, job losses, runaway cost of living, and capitalism’s climate crisis won’t stop now that the election is over.

Here is what YOU need to know about what the SSP is doing next – and how you can help:

“As expected, the big party machines – with their wall-to-wall media coverage and vast resources – dominated the outcome of the council elections, relying on lifelong voting habits, tribal rivalries, and the great divide over independence.

“But a growing minority had the courage and foresight to cut through all the mainstream propaganda and consciously voted for the proud, daring, radical socialist alternatives fought for by the SSP.

“In seats where we can compare results with the last council elections, we DOUBLED both our votes and our share of the votes.”

Fight Against Cuts and Cost Of Living Crisis Goes On

“New councils have been elected, but the crises of rocketing prices, fuel poverty, job losses, wage cuts, brutal assaults on workers’ rights (P&O are just the most blatant example), housing scarcity, rip-off rents, and cuts to community facilities will continue – and still need to be fought against.

“Grotesque profiteering by the billionaire capitalist class will not only continue but accelerate, with the energy companies this week announcing their profits have doubled (up 111%). This is why people’s energy bills have doubled – and why the SSP still fights on for democratic public ownership of all forms of energy, to wipe out the profiteering and provide clean, green affordable energy, instead of fueling the profits of the big polluters.

“The planet is still on fire, caused by a system that exists to maximise profit for the very few, and to Hell with the consequences for working-class people or the planet we live on.

“That’s why the SSP will continue to fight on for a Socialist Green New Deal – to create 350,000 new, well-paid jobs – through plans like free, expanded public transport for all ages; free insulation and broadband in every existing home; construction of 100,000 new council houses for rent, built to the highest environmental standards; rapid transition to green renewable energy, led by workers through their elected unions, to expand and create (not cut) jobs and improve conditions.”

“In essence, the struggle continues, against all that is rotten and corrupt about this system, in favour of a socialist future.

“Unlike all the other political parties, the SSP will NOT disappear now the elections are over. We will continue to build solidarity with workers in struggle. We will continue to help blockade the P&O profit pirates, demanding workers’ reinstatement, an end to slave labour and nationalisation of the entire shipping industry. We will still be on the streets campaigning against fuel poverty.

“And we will be back in future elections, with stronger numbers and renewed determination.

“But as the great socialist James Connolly said, ‘The only true prophets are those who carve out the future they announce.’

“Things won’t change – and they certainly won’t change for the better – without us being ORGANISED and prepared to FIGHT BACK. That’s why I appeal to everyone who voted for the SSP – or even gave us your 2nd or 3rd preference vote – to JOIN THE SSP.

Fight back against cuts and the cost of living

For people, not profit.

“Become a part of the socialist party you had the courage, clarity and conscience to vote for.

“Help shape the future. Help combat all the ongoing attacks on working class and young people. Join our fight for People not Profit!”

“Look at the link below. Read more about the SSP on our website. Order and read some of our books and pamphlets if you want.

“Get in touch to discuss and question what we are about and how YOU can contribute to building a socialist Scotland. Scotland needs a mass socialist party. And the SSP needs YOU to help create that party, so we ‘carve out the future’ in the interests of people and planet, not profit. Thanks again for voting SSP (if we had a candidate in your area).

Fight back against cuts and the cost of living

For people, not profit.