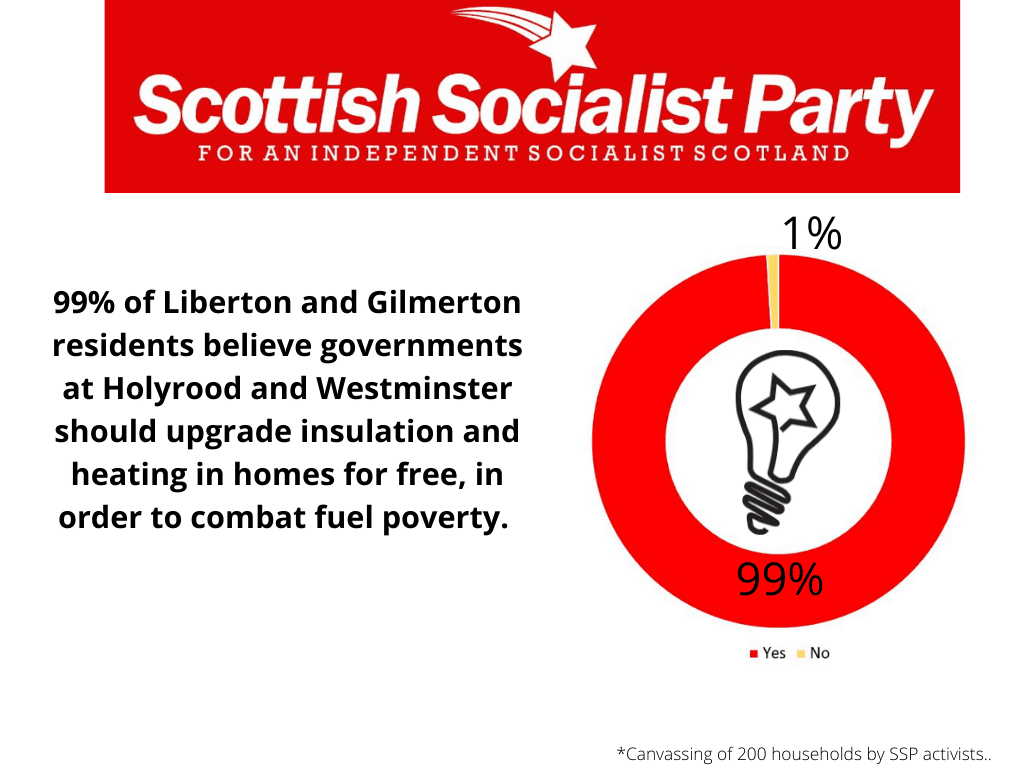 Voters in Edinburgh are demanding emergency action on the fuel poverty crisis, a recent survey has revealed.

91% of respondents in Liberton/Gilmerton ward support returning the gas and electricity industries to public ownership to combat fuel poverty.

91% of respondents want Holyrood and Westminster to act to end fuel poverty. A stunning 99% insist that the UK and Scottish governments should fund an upgrade to heating and insulation in homes, without cost to residents.

The SSP is standing for public funding to retrofit homes and public buildings in Scotland – creating jobs and fighting fuel poverty together.

84% of respondents feel that there has to be a faster transition to renewables in Scotland to fight fuel poverty.

The SSP campaigns for democratic public ownership of the production and distribution of energy in Scotland, with major public investment in renewable energy – and an energy system that works for people, not for profit.

The average household energy bill rose by £700 in April 2022. As many as one in three households in Scotland are in fuel poverty. Further price hikes are forecast for October this year.

Despite a crisis of fuel poverty and soaring living costs, the billionaire Tory chancellor Rishi Sunak said it would be “silly” to provide proper support to households.

“We have carried out extensive door-to-door canvassing in South Edinburgh over the past four weeks on the issue of fuel poverty. We have conducted hundreds of face-to-face interviews with people and noted their anxieties about the cost of gas and electricity.

“The cost-of-living crisis is uppermost in people’s minds and energy prices, in particular, are nearest to the top.

“One young woman I met last Friday in Moredun spoke for many when she told me, ‘I don’t know how I am going to pay if these bills go up another £900 in October. My wages have not gone up for three years. It’s already a choice for us between eating and heating.’”

The Scottish Socialist Party is demanding emergency action on fuel poverty and the cost of living crisis.

Private energy companies Shell and BP made a combined £750 in profit every second in 2021.

The SSP calls for an emergency programme to retrofit existing homes and public buildings – without cost to tenants. Retrofitting 2.62 million dwellings and 20,000 public buildings with insulation, draught-proofing, replacing old boilers with eco-friendly ones, and installing high-speed broadband nationwide will cut fuel poverty and emissions, improve living standards and health outcomes, and deliver a bounty of new, skilled jobs and apprenticeships.

Insulating and draught-proofing houses and public buildings, and replacing inefficient boilers, could cut energy use by 40% – cutting bills, emissions, and poverty in one, while creating new jobs and apprenticeships across Scotland.

No one should have to choose between a warm meal and a warm home. The SSP demands emergency action against fuel poverty.