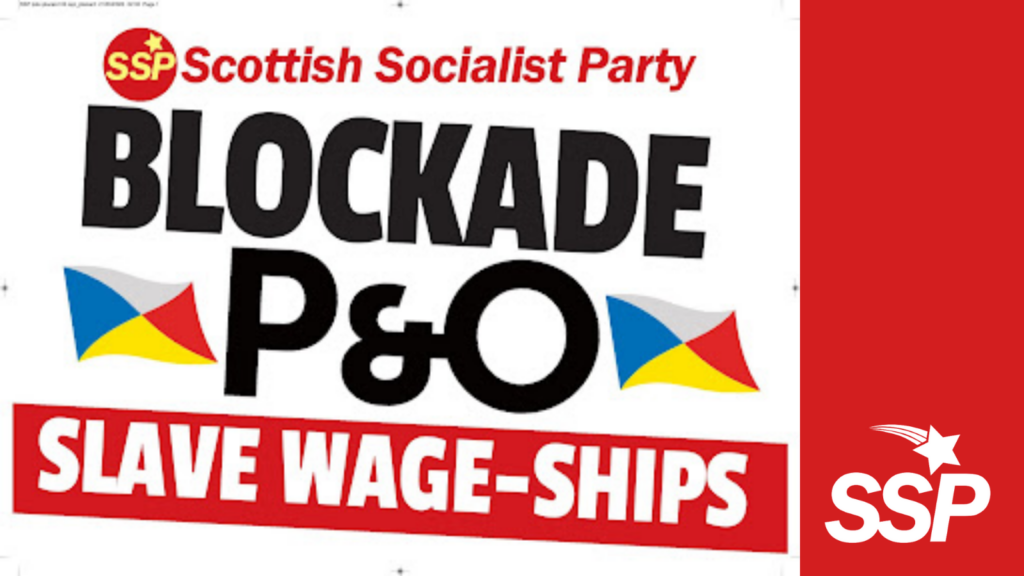 P&O bosses have used the most outrageous capitalist thuggery in living memory, only comparable to Ronald Reagan’s mass sacking of air traffic controllers in August 1981, when he had PATCO strike leaders manacled, chained like slaves, then paraded on TV stations to cow the rest of the American working class.

But the crews on P&O were not even striking! They were sacked on the spot, without warning, by video, then forced off the vessels by mercenaries with handcuffs and balaclavas hired by Interforce, as minibus loads of people from all over the world were dragooned up the gangplanks to replace the 800 workers. When crews on many vessels refused to leave the ship, P&O bosses added blackmail to their physical force thuggery, threatening officers on board with loss of every penny in so-called redundancy money unless they surrendered.

In the weeks since, P&O top dog, Peter Hepplethwaite, has brazenly admitted they deliberately broke the law in their mass sackings, told MPs he would do it again, and made clear to MSPs he has no intention of resigning, despite his law-breaking. He tried to justify their replacement of crews on union-negotiated wages by slave labour on as little as £1.80-an-hour by boasting the average pay of his scab army is £5.50-an-hour. His basic salary is £325,000… and the rest!

Even the Tories felt obliged to huff and puff about applying the £8.91 minimum wage in British waterways – which not only is too little and too late, but dodges the central point that they’d still be vastly undercutting the wages negotiated by the RMT and Nautilus for the proper crews who’ve been viciously sacked. Instead of such chicanery, laws should be enforced that any seafarers get the nationally negotiated rate and conditions for the job.

And the Tories knew about this wage-cutting thuggery in advance. Not only did P&O inform the Tory Ministry days before, but apparently raised their intentions at least as far back as November.

On top of which, they are not the first pirates of profit to pursue this course, just the first to do it with such crass brutality and disregard for recognised unions.

Irish Ferries, back in 2005, sacked hundreds of crew, albeit with legal consultation procedures, and replaced them with foreign agency workers. The RMT condemned the government at the time for “rolling out the red carpet” for these sackings. The same Irish Ferries last year announced plans to bring in ‘low-cost’ crewing models – similar to P&O – on their Dover-Calais service.

In 2014, the late RMT leader, Bob Crow, denounced “super-exploitation of foreign nationals in the British shipping industry, a massive scandal that the political elite want to keep quiet”, as the union organised protests over Condor Ferries, on the south coast of England, hiring foreign crews on as little as £2.40-an-hour.

The response of trade unionists and socialists has been magnificent, with large, lively demos at all the ports, including Cairnryan and Larne. Workers recognise this as a dangerous attack on us all, which cannot go unchallenged.

As I’ve tried to convey when invited by the RMT organisers to speak at the demos at Cairnryan and the supply chain of slave labourers, Clyde Marine Recruitment, we need to learn lessons from our class enemies in fighting for reinstatement of the crews on their previous wages and conditions. Politely pleading with them won’t win the jobs back. The bosses were shamelessly ready and willing to break the law in pursuit of even higher profits for DP World, who last month announced record profits of $3.8billion. Trade unionists need to be prepared to defy the Tories’ anti-working-class laws by taking what would be deemed by the Tories ‘secondary industrial action’.

Unions representing dockers at the ports should be organising non-handling of the P&O slave wage-ships, which are in any case so unsafe, crewed by people so untrained (as well as savagely exploited), that even the Maritime and Coastguard Agency has tied up two of them in the space of one week – at Dover and Larne – which is unprecedented.

Likewise, where any of the haulier drivers are in a union, steps should be taken to stop their use of P&O until the crews are reinstated.

As traffic is diverted to the likes of Stena line, workers and their unions will need to be vigilant and prepared to take appropriate industrial action on the impossible workloads that their own bosses will likely impose, especially at such peak travelling times as Easter. The entire industry is run by profiteers in a ruthless race to the bottom, and now is the time for the workers’ movement to start to turn the tide.

While taking these steps, the wider trade union movement leaderships – national unions, TUC, STUC included – need to seriously build blockades of the ports, properly mobilising members from the workplaces, after organising meetings with RMT or Nautilus speakers, to form human rings of steel that prevent sailings by P&O slave wage-ships.

And the Tories’ crocodile tears don’t wash! They have consciously, systematically created the atmosphere and the battery of anti-union laws to punish workers with savage wage cuts to turbocharge profits for big business, especially in the aftermath of the Coronavirus crisis, as we’ve warned they would for the past two years.

They need to be bombarded by massive demonstrations of trade unionists and their communities with demands that the government should seize the ships, take them out of the hands of the law-trashing P&O pirates of profit, and take them into state ownership, to make them safe by reinstating the trained crews on the wages and conditions previously won by their unions.

It is outrageous that not only does P&O account for a huge proportion of passenger traffic, but 15% of UK freight, and yet they have been allowed by the government to add to their portfolio by being big players in the first, London-based Freeport being pursued by Boris Johnson’s regime – the tax-dodging haven for exploiters being pursued not only by the Tories but also Scotland’s government, as spelt out by the RMT’s Gordon Martin in a previous issue of the Voice.

P&O is the epitome of capitalism, of ruthless class rule for profit, deploying physical force in pursuit of their aims when they think it necessary. The united response of the trade union movement needs to match that class determination, demanding nationalisation of P&O and the entire shipping and transport sector, under democratic workers’ control, to create a public service, not a haven for profiteering tax dodgers who will resort to the vicious super-exploitation of desperate people to achieve their maximum profit margins.

This whole episode reinforces the case for socialism, for a future based on People not Profit.