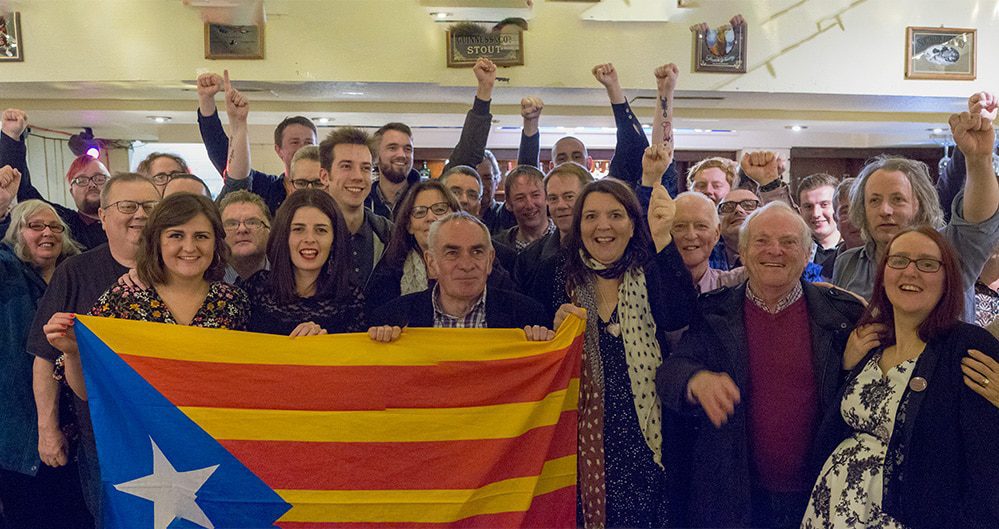 The Scottish Socialist Party offers its solidarity to those Catalans resisting the undemocratic and repressive response of the Spanish government to their democratic demand to determine their future relationship with the Spanish state.

We condemn the brutal police response to those protesting the continued victimisation of elected politicians for carrying out their mandate in organising the independence referendum last year. Such brutality, cloaked in the language of legality, is part of a long and dishonourable tradition of the Spanish state violently suppressing movements for change.

Having failed to defeat Catalan pro-independence parties at the ballot box in December, Rajoy’s government, whose party secured only 4% in those elections, have now moved to use their domestic courts and the judiciaries of other European countries to imprison prominent leaders of the independence movement. Currently eight sacked Ministers languish in jail and others are now facing court action across Europe as Spain demands their return. Facing trumped up charges of ‘Rebellion and Misuse of Public Funds’ they could face up to thirty years in jail.

The response to these events have again underlined the hypocrisy at the heart of the European Union which proclaims itself to be at the heart of a democratic Europe yet supports these profoundly undemocratic actions in Spain. For those in the independence movement in Scotland the actions of the EU highlights again the danger of basing our strategy for change on independence being our way back into an institution so lacking in democracy that acts at the behest of the ruling classes of Europe.

We welcome the solidarity movement that has developed in Scotland, which has recently been thrust to the centre of these events by the threatened extradition of the former Catalan Minister, Clara Ponsati. Protests, demonstrations and fundraising for her legal costs have demonstrated the scale of opposition to the arrest warrant and placed pressure on the Scottish Government to publicly criticise the actions of the Spanish government, however feebly. Currently on bail, Clara will return to face a final hearing in the coming weeks. The SSP will continue to play its part in the campaign to ensure her release.

The SSP supports the rights of the people of Catalonia to determine their own future free from state repression and violence. We encourage others to support us in that demand and get involved in solidarity events in the coming weeks.

Update: There was a national demonstration on 14th April, to condemn in the strongest possible terms the authoritarian actions of the Spanish state in oppressing Catalan democracy.

One thought on “SSP EC statement on Catalonia”