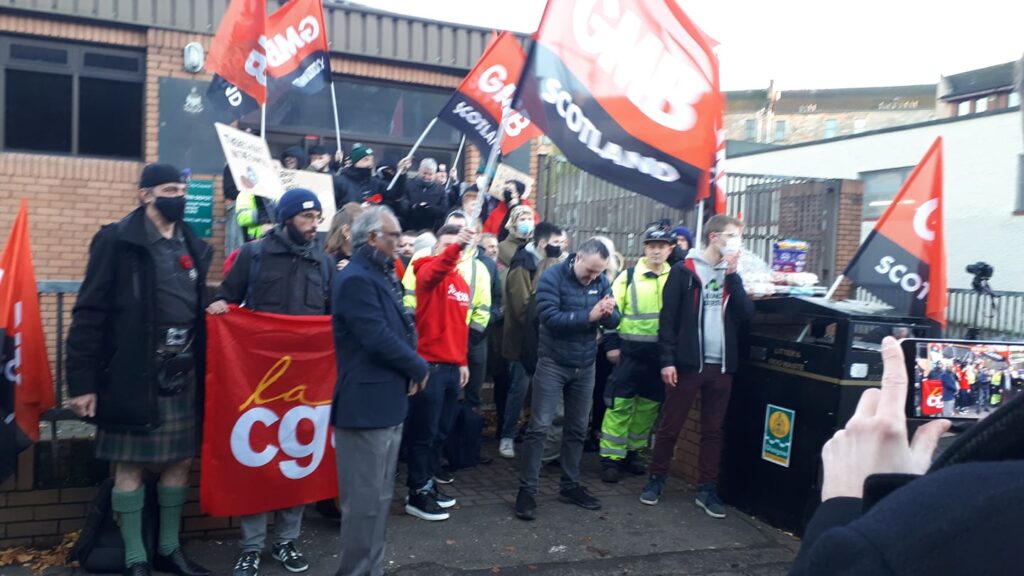 Glasgow City Council has threatened to bill the GMB Trade Union for the cost of private services.

“News reports that the SNP Glasgow City Council are poised to use private contractors to do the work of striking cleansing workers is an outrage.

“An appalling case of putting the false prestige of the council in the eyes of the world at COP26 ahead of the rights of their loyal, hardworking workers, who pick up the crap all year round and deserve decent pay for the public service they provide.

“If the council use private contractors it will expose them as anti-worker and anti-trade union, just as ready to use scab labour as your average Tory council.

“Trade unionists across the board should rally behind the strikers and defeat this scabbing.”

Cleansing workers and members of GMB were joined by other trade unionists – including some from as far afield as India, France, and the USA – at a lively protest demo this morning.

They are demanding that Glasgow City Council cough up a decent pay rise.

“This has been coming for a long time.

“We’ve been treated like shit on their Gucci shoes.

“We are here with other trade unionists and activists showing that the solidarity and camaraderie is growing stronger and stronger.”

Chris Mitchell is a guest speaker at the SSP public meeting this Monday 8th November at 7pm in the Community Central Halls, Maryhill.

He will be joined by BFAWU General Secretary Sarah Woolley, and RMT Regional Organiser Mick Hogg.