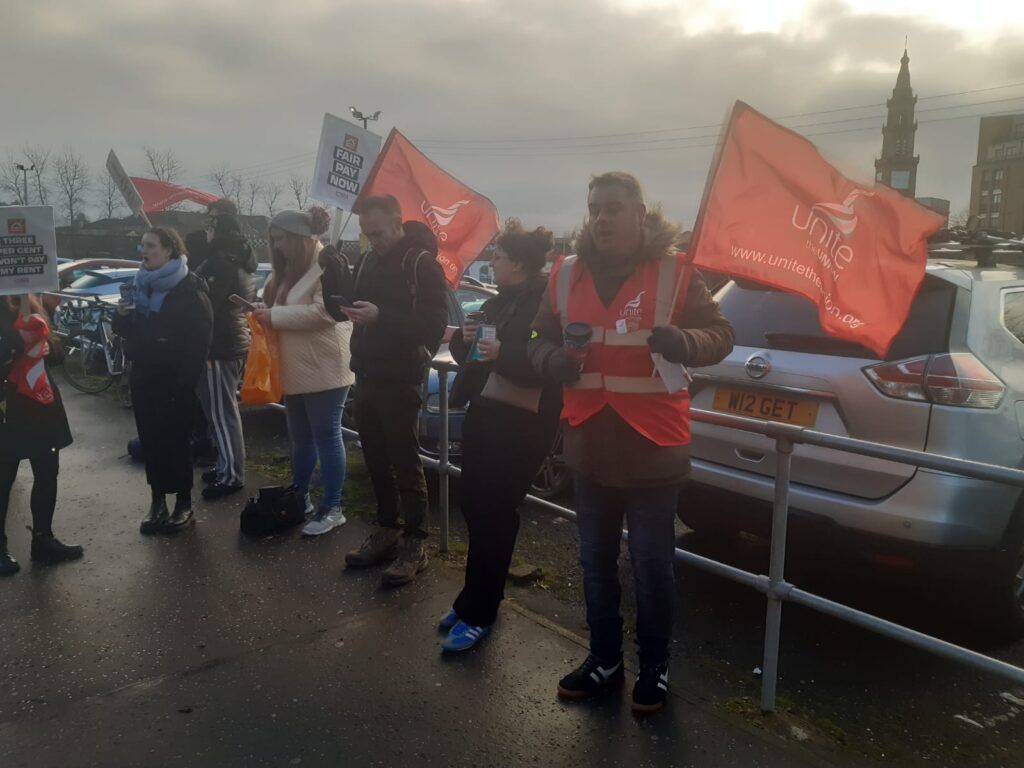 Over 600 workers at the housing charity Shelter are striking for decent pay, in the face of many of them fearing homelessness themselves – the ultimate condemnation of Scrooge bosses at the top of Shelter.

They can well afford a pay rise to match inflation, with reserves last year of at least £14.5million – compared with their target reserves of £8.9m.

Shelter’s chief executive started on a salary of £122,500 per year in 2017; no cost of living crisis for her then, nor fear of homelessness!

Unite pickets in Glasgow told me of their sadness, disappointment and anger at being treated this way after years of dedication. Many of them expected a last-minute settlement, as happened in a couple of previous years on the eve of strike action, but discovered Shelter are hell-bent on confronting the union to try and browbeat workers into real-life pay cuts, amidst inflation of over 14%.

“Since early this year we submitted a pay claim for 3% plus inflation, which at the time was about 6.5%, and asked the company to enter meaningful negotiations.

In April they imposed a 3% increase and refused to enter meaningful discussions since.

Following the results of the strike ballot in November the company did agree to go to ACAS. However, there was no new deal put in place and inevitably we’ve had to go on strike.

There was the semblance of a propsal of 4% but only backdated to December, and it would form part of a two-year deal for next year. The union’s position was that we’re mandated to settle this year’s pay dispute and asked them to backdate the 4% to April. At that point Shelter called a halt to proceedings at ACAS and withdrew the offer.

There’s an irony here. Shelter exists to prevent homelessness and defend the right to a safe and secure home. But the people delivering those frontline services potentially are in a position where they could be made homeless because they can’t afford the rent.

So we’re looking for a decent, consolidated pay offer to minimise the cost of living crisis that’s affecting everybody. We’re still open to meaningful dialogue but at this moment in time they’ve refused to get back round the table.”

I asked Davy what his message to other trade unionists is.

I asked what his opinion would be of the call the SSP has made persistently for the past 6 months: for union leaderships to coordinate strike action, including through a 24-hour general strike.

“I definitely think there should be a general strike. I think the unions probably are coordinating strike action, simultaneously, but I think there needs to be a clear message to the TUC and STUC that a one day of action with all the unions involved in disputes would probably have a bigger impact than individual unions taking their own action.”

The Scottish Socialist Party has no hesitation in standing in solidarity with Shelter workers – and every other striker.

We know which side we are on in the class war launched by the Tories and employers. We stand for pay, not profit – even when it’s not called profit, but ‘reserves’, because it’s a charity!