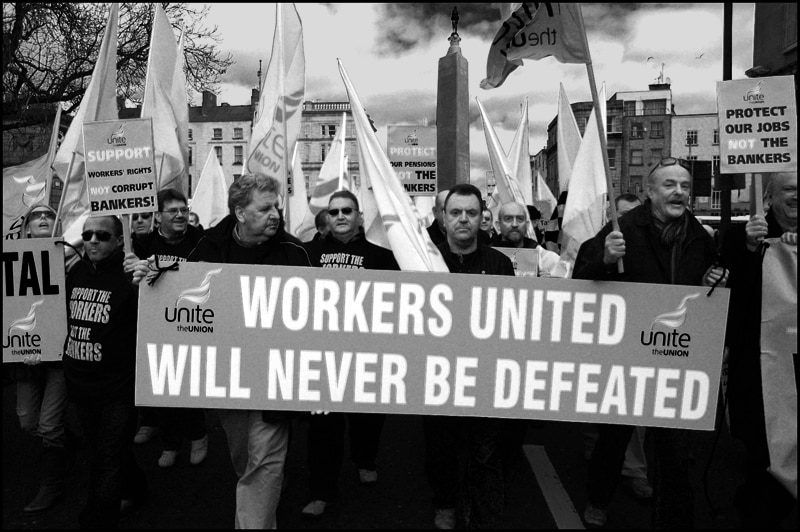 The Tories are hellbent on turning workers into slaves. They are rushing through legislation on so-called Minimum Service Levels that would effectively ban the right to strike for countless workers, and drastically undermine the effectiveness of any attempts by any workers to stand up for themselves against pay cuts, job losses, slashed working conditions, dangerous safety levels, and decimation of public services.

Under their long-trumpeted new laws, the Tories would empower employers with the weapon of naming workers who must go to work during any strike action, even after their union has gone through the entire rigmarole of postal ballots, outrageous voting thresholds and 14 days’ notice of strike action to make the strike legal. Any named worker would face potential dismissal from their job if they declined to come into work on strike days, after being handpicked by the employer – with no legal protection from unfair dismissal, which workers currently enjoy for the first 12 weeks of a strike. And unions could be sued unless they obeyed the employer-imposed minimum staffing levels on strike days.

The right to strike is a fundamental human right, one that separates the wage-slaves of capitalism from the literal slaves of the ancient slave empires of Rome, Greece and others. It’s a right enshrined in the European Human Rights Commission, ILO and other international bodies. The human right to withdraw your labour, rather than being chained to the demands of profiteering employers.

It’s the difference between being able to take collective, agreed industrial action to stop the relentless assaults on jobs, pay, workplace health and safety, and indeed the quality of services provided to the public – or abject capitulation to the profit-crazed attacks by big business and austerity-driven governments.

The British government has been quick to condemn SOME regimes abroad as dictatorships when they outlaw the right to strike – unless they happen to be their allies in world exploitation! They are now poised to imitate the actions of the worst dictatorships.

When the smiling snake Grant Shapps – Secretary of State for Business, Energy and Industrial Strategy – appears on TV reassuring viewers this is all about protecting ‘Minimum Safety Levels’, he is indulging in his customary, deceitful, barefaced lies. The same creature cried crocodile tears and muttered faux outrage at the on-the-spot sacking and replacement of 800 ferry workers by the gangster capitalists of P&O Ferries last March – and then helped his Tory government rush through emergency legislation that now allows any employer to do fundamentally the same thing: replace strikers with agency workers.

Back in his days as Tory Mayor of London, Boris Johnson pioneered the call for a ban on strikes in transport – because workers on London Underground dared defend themselves and the vital service to the city’s economy they provide.

Last year, when railway workers were (and are) to the fore in fighting back against over a decade of pay cuts and vicious assaults on safety standards for the travelling public, the chorus of demands for de facto strike bans on transport grew louder in the Tory ranks and their hired assassins in the right-wing media. We repeatedly warned at the time that if they got away with this against railway workers – under the guise of Minimum Service Levels legislation – they would inevitably extend their assault on the right to strike to other sectors. It didn’t take long for that warning to be totally vindicated. As ambulance workers, NHS staff, border security civil service staff and teachers strike in defence of themselves and their services – and firefighters ballot to follow suit – the Tories’ legislation proposes to include all of the above, plus workers in nuclear decommissioning.

The Tories’ claim that these laws are to protect Minimum Safety Levels is rampant hypocrisy and downright lies. Unions in key sectors have for years agreed and organised ‘life-and-limb cover’ when they plan strike action. Over recent decades, I’ve discussed with umpteen groups of workers in the likes of council services and the NHS who are taking or preparing strike action, who not only explain they are busy organising, through their unions, for ’emergency cover’ or ‘life-and-limb cover’, but add that in many instances the slaughter of staffing levels actually means they are putting more staff on duty during this exercise than would be there on a normal working day!

And that’s before the eruption of the current, life-threatening levels of understaffing in the NHS, social care, fire and rescue and other vital services. That’s before the Tories succeed in driving train companies into imposing Driver Only Operated trains across the board, or slash rail maintenance by at least 43%, as they want to do right now in return for below-inflation pay offers. It’s the Tories and their pals in the boardrooms who threaten ‘minimum safety levels’, not strikers. In fact, many of the strikes, such as on the railways and NHS, are precisely in defence of safety levels.

When Schapps et all trot out the lie that their new anti-strike laws are to prevent people having to wait for an ambulance, which planet does he think we all live on? Before any strikes by ambulance workers – or other NHS staff – people have been suffering life-threatening delays, due to decades of conscious refusal to invest in the NHS, with bed cuts, staffing level crises, exacerbated by drastic pay cuts and crucifying overwork and burnout. In fact, one of the main drivers behind strike action by ambulance workers is the daily crisis of understaffing and chaos caused by the impact of austerity on our hospitals – well before Covid added a further twist to the spiralling NHS crisis, of which the government themselves are the chief architects.

No doubt Grant Schapps has – like his boss, Rishi Sunak – a gold-plated private health scheme, so he won’t be worried about the delays in treatment of the sick, made daily worse by his regime.

Their new, even more vicious anti-strike laws will do nothing to avert that crisis, and by undermining workers’ ability to resist their austerity cuts will actually make things worse in the frontline services the Tories want to spearhead their de facto strike ban within.

Britain already has the most repressive anti-union, anti-working-class legislation in the entire western world. Laws that were especially ushered in by the hated Maggie Thatcher Tories in the 1980s but retained absolutely by 13 years of New Labour governments; made even worse since by Tory and Tory-LibDem regimes; now being drastically added to by the current, unelected Tory government, presided over by the 222nd richest person in Britain, Rishi Sunak.

In their mission to crush workers’ pay and conditions to turbocharge profits, the Tories want to destroy the collective power of organised workers by breaking the unions. They must not succeed.

The Tories have embarked on their escalated war on the working class because they’ve had a fright, with currently 2 million workers either taking strike action or having already balloted to do so.

For decades, the employers and their political puppets got away with murder, with the help of defeatist union leaders who told us there was nothing we could do to resist. Now workers have begun to rise off their knees and fight back, the British ruling class are unleashing their customary class brutality. They must not succeed in their war on democracy, workers’ rights, pay, jobs and services.

The employers and government are desperate to divide and conquer workers. They hope – in vain – to whip up ‘the public’ against strikers, to paint themselves as the saviours of public safety through these laws. But who are the public? It’s the railway workers, posties, teachers, university staff, civil service staff, coffin makers and a host of others who have had enough and are striking back.

That widespread solidarity across multiple sectors of the working class is the chief weapon of defence against the attempt to convert workers into slaves. The TUC has threatened legal action against the government’s plans. Fine, explore any avenues of self-defence. But it’s a dangerous myth to think legal action is the main, let alone only form of resistance. Legal challenges have sometimes been useful, but the most fundamental means of defence of the right to strike is… to strike back, together!

Bring Out 1 Million Strikers – Together!

One million workers are already either striking on (mostly) separate dates or have live ballots to do so. Alongside the appropriate tactics in each union or industry – with full input to decisions by shop stewards and conveners – the unions embracing these million members should urgently name the day for at least a partial general strike of one million workers, around their common demands on pay, jobs, conditions, services – and in opposition to this attempt to ban strikes. Better still, and simultaneously, the union leaderships – starting with those already engaged in action, putting relentless pressure on the timid TUC – should name the date for a full-scale 24-hour general strike of the entire seven million trade unionists in the UK, including over 600,000 in Scotland.

With proper preparation in workplaces and communities – mass meetings, public meetings, rallies, street activity, media, etc – this could win massive support, including amongst people currently not in a union, not in a job.

That is perhaps even more so in Scotland. We never voted in this Tory government – and never have given the Tories a majority since 1955.

The STUC and individual union Scottish leaderships should urgently draw up plans, including a mass Demo at the Scottish parliament, welcoming the SNP government’s stated opposition to these new Tory laws, but calling on the Holyrood government to declare its outright refusal – in advance – of ever implementing these anti-strike laws in Scotland, in either the sectors they directly or indirectly employ workers, and outlawing them in contracts they hold with private employers.

Such a Demo – with such an aim – would also add pressure on the Scottish government to end its public sector pay cap and cough up the funds for decent pay for teachers, NHS staff and others currently in dispute. It could pound the Holyrood politicians with demands to defy Tory cuts and instead demand back some of the £5billion stolen off Scotland by Westminster since 2010, to avert the looming carnage in areas like local government.

Combining union demands on pay and conditions with defence of the basic democratic right to strike – through determined action – is the best and only guarantee of success.

Time is short. Prolonged legal wrangling in mostly hostile Courts is not the means to defend the working class. A mass Scottish Demo, and proper preparations for combined strike action – on the same day by all those currently striking and on an urgently named date for a complete 24-hour general strike – are the routes we need to travel.

Refuse to be slaves! Strike together, march together, win together!