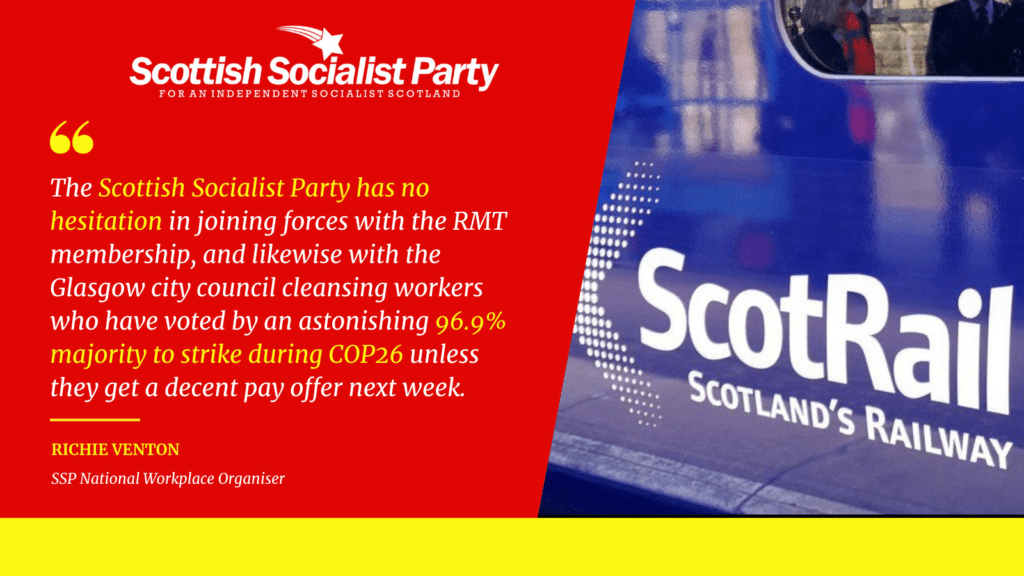 ScotRail Strikes: the Scottish Socialist Party has no hesitation in backing workers who have voted to strike during COP26. Read Richie Venton’s interview with RMT Scotland Regional Organiser Mick Hogg below to learn why RMT members at ScotRail have voted to strike.

In a massive turnout and by an 84% majority, RMT union members in all grades of work on ScotRail have voted to strike on pay for the entire duration of the COP26 conference, from 1st to 12th November. Likewise, RMT members on SERCO’s Caledonian Sleeper trains have voted for two 48-hour strikes at the start and finish of COP26.

Undoubtedly this will unleash weeks of vitriolic attacks in the media, in keeping with the attacks on the RMT weeks ago by all five backbench Glasgow SNP MSPs.

It’s not a decision arrived at light-mindedly by ScotRail or Caledonian Sleeper staff. They stand to lose pay, and face attacks from the media, but they’ve decided enough is enough. It’s the result of months – 18 months on some of the issues – of stonewalling by the railway bosses, who refused to even meet the union for negotiations for much of that time. And behind these bosses stands Transport Scotland, an arm of the Scottish government, and in turn the Edinburgh government of the SNP itself, now propped up by the Scottish Greens.

Both sets of railway workers have gone from being hailed as Covid heroes to being offered zero in their pay, despite the escalating cost of living crisis, and despite massive bailouts of both Abellio and SERCO from public funds, under the Coronavirus Emergency Measures Agreements, plus huge pay hikes for top bosses.

For 18 months ScotRail general grades have been asking for equality and pay justice; for reinstatement of enhanced payments for working on their rest days, currently only given to ScotRail drivers. For about 8 months they’ve been striking on this every Sunday. Up until they threatened action during COP26 they were ‘slung a deafie’ by the Scottish government and its Transport arm, Transport Scotland.  On top of that, and more fundamental still, they were facing the third consecutive year with zero pay rise… until they threatened strikes during COP26.

These workers have sensed their latent power at the time of the prestigious, show-piece COP26 jamboree, with 140 heads of government, corporate chiefs and the world’s media in attendance.  They’ve quite rightly sought to squeeze some compensation for their dedication from a Scottish government that is desperate to be seen in a green light during COP26 – despite threatening to slash train services next year and thereby further undermine moves towards carbon-neutral transport.

The Scottish Socialist Party has no hesitation in joining forces with the RMT membership, and likewise with the Glasgow city council cleansing workers who have voted by an astonishing 96.9% majority to strike during COP26 unless they get a decent pay offer next week.

The guns of the media will doubtless be turned on workers who dare spoil the party at the 26th Conference of the Parties (COP26). The SSP will seek to build maximum solidarity with workers who dare to confront the employers and Scottish government in pursuit of decent rewards for their work, which is what keeps society functioning.

MICK HOGG, RMT Scotland Regional Organiser, spoke to the SSP’s RICHIE VENTON about the looming battles to save Scotland’s railways and win decent pay, with strike action throughout the COP26 conference.

“Both Abellio ScotRail and SERCO Caledonian Sleeper have failed to make any meaningful offer on pay. The eyes of the world are on Glasgow with the COP26 event being held. So the four railway trade unions decided to up the ante. The RMT engaged with the other unions because ScotRail have produced a Report that determines what Scotland’s railways would look like after COVID. They commissioned the Report from Ian Doherty who’s a professor at Stirling university. But we’ve done a bit of digging and discovered Doherty is a former director of Abellio ScotRail!

“The report has cuts and disaster written all over it. It’s a straight lift from the previous McNulty Report. We’ve commissioned our own report to put Scotland’s railways first, advocating increased investment, more jobs, a greener railway system and to advocate on behalf of the most vulnerable people who will be denied access to the railways if the Doherty Report is implemented.

“We held two recent demonstrations. The first outside the First Minister’s official residence, Bute House, which was a magnificent demo by the four unions supported by politicians, the public and other trade unions, demanding action to save our railways from Abellio and Transport Scotland – who are hand in glove with them.

“We held a second demonstration at Queen Street station when it was officially opened by the First Minister after the multi-million-pound upgrade. It was loud and noisy and they had to employ a piper to drown me out on the megaphone when I was demanding the First Minister intervene to settle the pay dispute and to save Scotland’s railways.

“The theme of the campaign is “Six months to save Scotland’s railways”.

“As a result of the campaign and the protests, lo and behold Abellio have made an offer to drivers and the general grades. But the offer made to the general grades is completely unacceptable to the RMT. It’s an insult, it does not address the pay disputes.

“We consistently explained that there are three separate and distinct issues. Rest day payments is something we’ve been in dispute over for 18 months, with strike action every Sunday for the past eight months. They refused talks with us until COP26 came along.

“On pay, we’ve had no pay rise for three years.

“And on COP26 itself, we wanted reward for running this vital service during the conference.

“What they’ve done in the offer is combine rest day working payments, pay in general and the COP26 dispute and rolled them all into one.

“The only part that’s an actual offer is the £300 lump sum for each ScotRail worker, costing a total of £1.2million. But every penny of that is coming from the UK government. In talks, we proposed that since the UK government paid this, they should go back and ask for them to also pay for enhanced payments for all grades for working their rest days, or else go to the Scottish government and ask them to match it.

“The offer they’ve made is totally unacceptable. The RMT are not prepared to accept scraps.

“For the first year they’ve offered us 2.5%, broken down into 1.4% to match RPI and 1.1% to buy out the rest day working dispute. For year 2 they’ve offered 2.2%, but based on efficiency savings, selling hard-earned terms and conditions. This includes closure of booking offices, which would deny disabled and vulnerable people the help they need at stations.

“It’s worth saying that the train operating companies south of the border have offered absolutely nothing. The only reason an offer has been made in Scotland is COP26 and the campaign we’ve launched. We previously decided, after full consultation with the members, to take industrial action during COP26, and conducted a ballot of members to decide whether to do so. The action planned will be for the entire 12 days of COP26, which would create industrial havoc until they come back with a meaningful offer.

“The members have voted and the result has smashed through the Tory anti-union thresholds, with an 84% Yes vote in a turnout of 57%.

“Today we are also serving notice on SERCO that RMT members will be taking action over two 48-hour periods, one at the start and one at the end of the COP26 conference.

“Once COP26 is over we still need to keep campaigning around ‘6 months to save Scotland’s railways.’ We need the First Minister and Scottish government to reverse what’s being proposed, with Abellio ScotRail and Transport Scotland suggesting timetable cuts with 300 less trains per day. That’s 100,000 less trains over a year. We need a greener railway to take people off the roads, out of their cars, but the impact would be the reverse if left to Transport Scotland and the Doherty Report.”