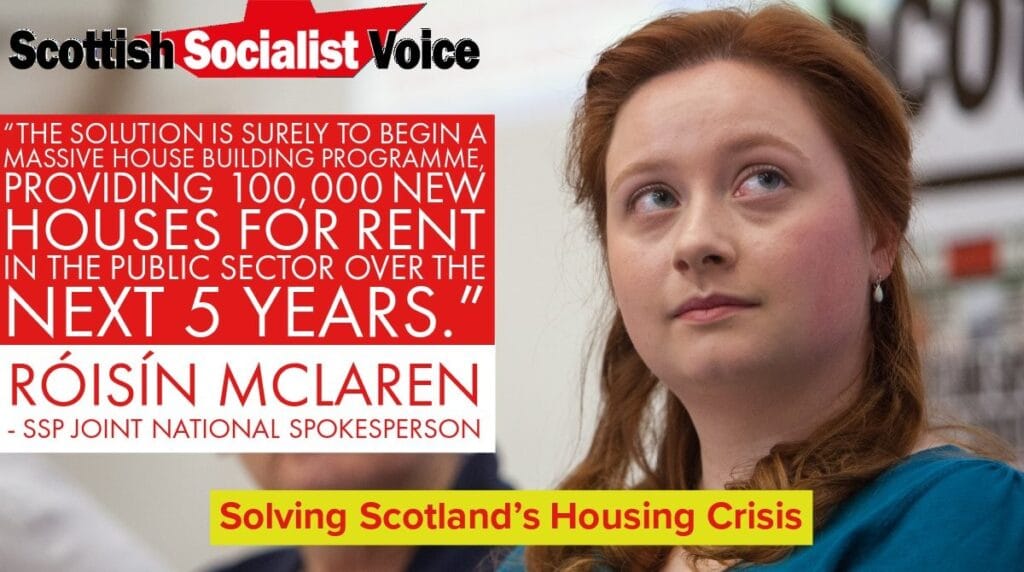 The Scottish Government has been condemned by housing campaigners over £268m cuts to affordable housing spending in the 2021 draft budget.

In her statement to Parliament, Finance Secretary Kate Forbes said that the COVID crisis has ‘underlined the value of a safe, secure and affordable home’ while cutting hundreds of millions from the ‘More Homes’ allocation.

“It’s shocking to see the Scottish Government cutting investment in affordable housebuilding to the tune of £200m.

“The Cabinet Secretary recognised herself that COVID has ‘underlined the value of a safe, secure and affordable home.’ But today she has chosen to cut investment in social and affordable homes, at the same time as choosing to find an extra £100m for motorways, roads and air travel.

“Good quality housing is literally a matter of life and death. That’s why we’ve repeatedly called on the Scottish Government to commit to reducing affordable housing need by the end of the next parliament.

“Today, they’ve not only failed to take the opportunity to do so – they’ve actually gone backwards.”

“Few would deny Scotland faces a housing crisis which inflicts real hardship on hundreds of thousands of families every day. With 200,000 people on the housing waiting list, it will take them 20 years, at the current rate, to secure decent accommodation

“I believe the housing crisis is now one of the most urgent problems facing us.

“The SSP rejects the view, prevalent for the past 30 years it seems, that the ‘market knows best’. All the available evidence shows that not to be the case. The belief that only the moneyed few can enjoy a decent home – while the rest of us are denied our inalienable right to affordable accommodation equipped with all the amenities and facilities we should expect in the 21st century – is one the SSP rejects. And yet it increasingly seems the SSP are one of the few voices left championing such an opinion.

“No one should expect those parties advocating neoliberal free-market options to solve Scotland’s chronic housing crisis. Not only are they not going to solve the problem, they are complicit in it.

“The solution is surely to begin a massive house building programme, like we did in the past, this time providing 100,000 new houses for rent in the public sector over the next 5 years.”

Coronavirus has exposed and exacerbated the scale of Scotland’s housing crisis, as well as alarming levels of precarious housing conditions.

In September 2019, 11,432 households were living in temporary accommodation – including 7,252 children. At current rates, it will take 20 years to clear the present waiting list for housing in Scotland.

In 2018, the Scottish Government’s ‘Housing Beyond 2021’ paper identified the need for policy initiatives to address the needs of rural and island communities. But the Scottish Government has failed to get anywhere close to meeting targets addressing the rural housing crisis, with less than 5% of the 2021 target having been met.

The 2019 Housing Conditions and Standards Report revealed that 68% of Scottish homes suffer from disrepair and, shockingly, half of Scotland’s dwellings have disrepair to critical elements – including roof coverings, windows, and exterior doors. This has led to a housing crisis of dampness and fuel poverty in Scotland.

Shelter Scotland shows that more than 11% of households are affected by damp/condensation, 619,000 experience fuel poverty, and in the middle of a pandemic 53,000 households are overcrowded.

Citizens Advice Scotland has revealed that, in Scotland, one in ten have had to skip paying energy bills due to a lack of cash during the pandemic.

The Scottish Government is due to publish its ‘Housing to 2040’ strategy in March 2021.

The Scottish Socialist Party is calling on the Government to commit to restoring the public housing stock, and to creating jobs, by building 100,000 new homes per year.

The SSP campaigns for suitable, affordable, and environmentally-sustainable for-rent public-sector homes per year until demand is fully met – including 20,000 per year in rural areas.

This work would be carried out through a publicly-owned national construction company to ensure that public need drives us towards making a home a human right in Scotland.

The SSP also calls for caps on both secondary home ownerships and extortionate private rents, and supports a graduated rent discount set at the same level as the support that would have been available for tenants to buy their council homes under “Right to Buy”. After 25 years, tenants would pay zero rent until their tenancy is terminated or transferred to another member of the family.