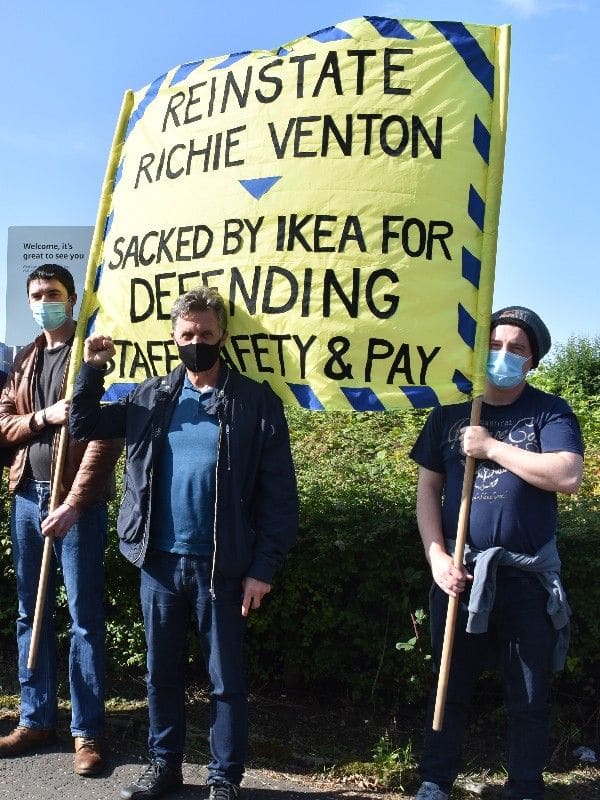 This is just the latest blow to impact the arrogant bosses who believed that they would brush aside any opposition to their sacking of Richie and attacks on  workers’ sick pay only to spark a wave of opposition.

Responding to a question from Richie’s MSP Sandra White – herself a former USDAW union rep –  the FM acknowledged that she knew Richie and his formidable campaigning record over many years, and although not commenting on individual cases, backed the right of union representatives to protect workers’ interests without victimisation.

She insisted the Scottish government expects employers to not only be aware of but carry out in practice the legal rights of union reps to conduct their trade union activities “without recrimination.”

The fact that the man they sacked was referred to in such warm terms by the First Minister puts further heat on IKEA bosses – and this was sent soaring when Sturgeon called on them to get round the table with the union to find a positive solution.

The issue has already been raised in Westminster in an Early Day Motion tabled by Chris Stephens MP, which is currently backed by 48 MPs  from five different parties.

Taken with the wave of solidarity from across the UK and beyond, and the ongoing demonstrations at a growing number of IKEA stores, the pressure on the arrogant bosses to change course is growing daily.

Sources close to IKEA senior management report a series of increasingly frantic meetings desperately trying to hammer out a face-saving strategy to halt the growing wave of opposition from workers, trade unionists, politicians and customers.

However, they are now learning that their brutal sacking of Richie isn’t going to be the pushover they hoped for, nor are workers going to meekly roll over and see their sick pay slashed.

For socialists and the broader labour movement this is not just a battle about Richie’s job or IKEA workers’ sick pay –although both are key issues– but the outcome can play a pivotal role in shaping how workers defend themselves on the looming Covid  jobs crisis.

The bosses’ Financial Times is now predicting one million unemployed in the UK by Xmas, making the need for resistance to the ensuing attacks on those both in and out of work essential.

The sternest test of the workers’ movement in decades is only weeks away and the kind of wave of solidarity already seen in the struggle with IKEA , which is exemplary in its volume and breadth of support, will need to be built many times over to protect and advance workers and their communities.

So far this has been confined to polite discussions bstween top union officials, bosses and governments, which of course are a necessary part of dealing with such a crisis.

However there should be no illusions that as furlough ends the gloves will be off  and the choice before the labour movement will be to firmly encourage and back those who stand firm and fight back while continuing to press government and employers for concessions.

The struggle put up by Richie Venton and the growing solidarity movement triggered by his victimisation, is a glimpse of how to beat back the onslaught looming towards millions of workers. After IKEA lumped Coronavirus in with all other illnesses, from early June until the end of August, they were driven into a major climbdown as the mass circulation Daily Record exposed the truth on 28th August. Since then, IKEA has tried to defuse the fury of its workforce and wider movement by treating Coronavirus sick absences differently, which is a partial victory for Richie and the campaign demanding his reinstatement. Determined struggles with courageous leadership can win concessions from even the most brutal union-busters, which IKEA has been itself shown to be.

In crisis after crisis one of the key responses from employers is to sack workers and cut wages under the cosh of mass unemployment and only the treminally naive will expect anything different this time.

Richie’s struggle and that of his fellow workers has provided a light in the gathering gloom and the choice, rapidly at hand, is flight or fight. We have been warned and need to prepare now.

One thought on “Richie Goes to Holyrood: Sacking raised at FMQs – what next?”