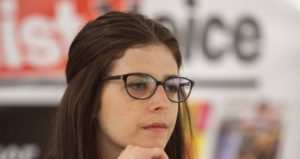 Every August, Edinburgh hosts one of most well known festivals in the world. The streets are swollen with people, and pop up bars, and shows.

But the harder you look, the more it all seems to blend into one; masses of overpriced comedy shows, expensive gin bars, all catering to a now predominantly middle class, Home Counties audience.

The prices go up and the diversity drops. Most people have been priced out of their own city’s festival.

They put on a good show, but you don’t have to look too hard to see beneath the surface — it’s clear the decadence does not reach all of Edinburgh’s citizens.

Most people working the festival are on ridiculously low pay and long hours, and half the people who live in or around Edinburgh can’t afford to participate.

And, most starkly, there’s barely a shop door without someone sleeping rough at night. The shame of our housing crisis is right there in plain sight. 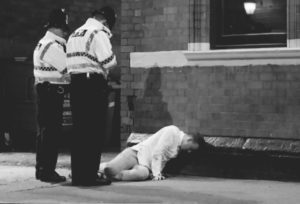 This year, I experienced something that put this divide into a sharp, ugly contrast. I was out running with my friend in Leith, and we came across a man on the floor, surrounded by paramedics.

We kept going as they seemed to have it under control. On our way back we saw them walking away, but the man was still on the floor. He was drunk. He couldn’t walk more than a few steps without falling over, he had no idea where he was or how to get back to his hostel.

The cycle path has no passing traffic; it would have been unsafe to leave him there after dark. He was lying on the ground, half conscious, in just a t-shirt and jeans. We called the police who were unwilling to help, and said we should just leave him there.

He was a local man living in a hostel, he was drunk. After we persisted, they eventually came and told us they would take care of it and that we should leave. Their attitude made me sceptical, so we pretended to leave and as soon as we were out of sight they got back in their car and left. Hours passed and no one came.

We called several homeless charities looking for advice, but they were all closed on Saturdays. Some passers-by offered help, but most just walked past, avoiding eye contact.

Some told us that though it sounded heartless, we should just leave him there. It was his choice. He fell over several times. Once face first into muddy water, several times narrowly missing a lamppost with his head. If we had left, I am, sure he would have fallen hard one time too many. So we kept searching for numbers of people who could help, kept making calls.

As we waited, we got chatting. He told us his name, and that he had got out of Saughton a few weeks ago. He clearly was having difficulty readjusting to life outside. He felt lonely and stuck in a rut — out of prison but with no prospect of a home or work. He was frustrated. He spoke of suicidal thoughts.

Eventually, three hours after we found him and after a particularly nasty fall head first, an ambulance came and helped.

Is this how we treat vulnerable people? Is this how our society reaches out to those who are struggling? I could not believe how little people cared, or how some even seemed angry at us for wanting to help him.

I wonder what happened to him at the hospital; whether they offered more long term, meaningful help, or just sobered him up and sent him on his way.

Every year, Edinburgh is crammed with more and more tourists. The hotels double in price, renters are evicted from their homes so landlords can take advantage of the sky high rents.

I heard so many visitors say what a wonderful city this is. But the truth is, we are only as great as how we treat our most vulnerable.

With homelessness in Scotland predicted to rise by 53 per cent in the next 25 years, we need to take a long hard look at this callous approach.

We need to ensure no one ever has to find themselves in the desperate and dangerous situation of sleeping rough.

Most of us are no more than one wage packet or one mistake away from having everything ripped away.

I’m not interested in some display of grandeur every summer, I’d rather the city I live in erase the shame of homelessness, through social housing, well paid work, and fair rents. Then I’ll be proud to live in Edinburgh.

This is a piece previously published in the Scottish Socialist Voice.