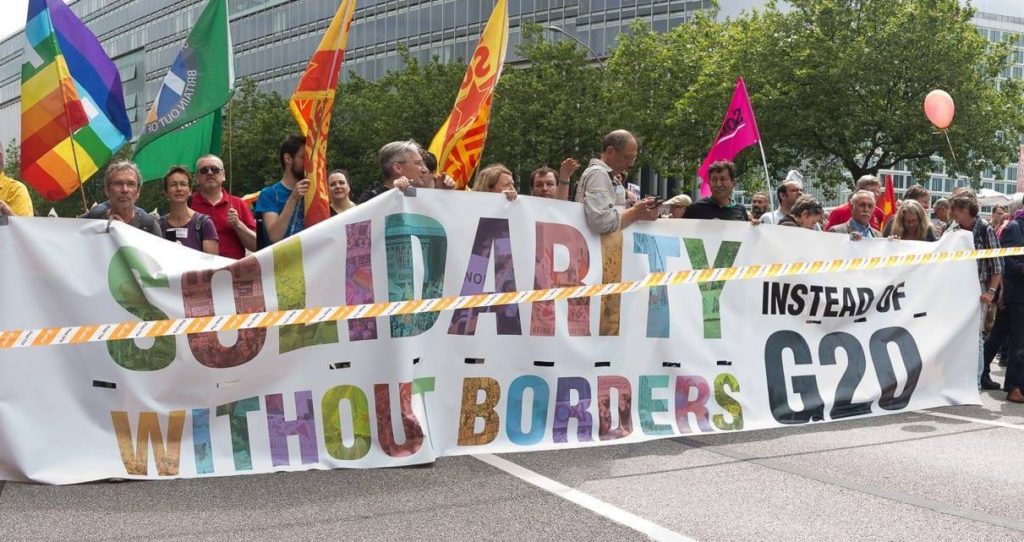 We terrified the establishment at the G20 Summit in Hamburg. Now, they’re fighting back.

The Scottish Socialist Party was there — a handful of activists clutching flags, leading a demonstration of over 100,000 people through the streets of Hamburg in opposition to the G20, the last major demonstration at the end of a week which was packed with them.

Germany’s second-largest city hosted protest camps, rallies, parties and blockades in early July as activists both local and international mobilised against that summit of world leaders, held provocatively within a stone’s throw of the city’s proudly radical and autonomist districts.

Each and every action took place under a repressive and permanent police presence, with tens of thousands of police officers drafted into the city and the great blue hulks of the Hamburg police water cannons looming behind every gathering.

As previously reported in the Scottish Socialist Voice, German authorities sought to turn the city into a “democracy-free zone” for the duration of the summit, in part by creating a 38 km² security zone in which all demonstrations were to be banned. It’s safe to say that the so-called “blue zone”, through which over 100,000 marched on Saturday 8th July, existed only on paper.

Police attempts to shut down entirely legal protest camps set up to provide shelter for international activists were also reluctantly abandoned when Hamburg’s civil society, reacting to images of police defying court judgments to confiscate tents and pepper-spray campers, rallied to their aid and offered alternative shelter in churchyards, stadiums and theatres.

But each small victory provoked its own kind of backlash, with rising tensions culminating in evenings of violence where fires were set in the streets and shops were smashed and looted.

By removing the violence from the broader context of Hamburg’s de facto police occupation, and wrongly ascribing them entirely to leftists, the German government has claimed a mandate to crack down on what it calls “left-wing extremism”.

With federal elections on the immediate horizon, the government is trying firstly to link the radical left to images of violence during the G20, and secondly to equate that violence with that of the right-wing extremists who target minorities and burn down refugee shelters.

Hamburg’s Mayor, the SPD’s Olaf Scholz, has threatened the status of the Rote Flora, the squatted autonomous centre at the heart — both practically and sentimentally — of Hamburg’s radical left.

Each of these blatant efforts to shrink the power of the organised left at both a European and local level will rightly be resisted.

In the meantime, those of us who returned from Hamburg safely — having experienced a week-long joyful, creative and exciting mobilisation the likes of which Europe has not seen in years — have a particular duty to those left behind.

Dozens of activists, mostly from abroad, remain in custody following police operations towards the end of the protests. Grassroots activists and Germany’s third-largest political party, Die Linke, have called for their release, and practical solidarity is being sought from abroad.

The Scottish Socialist Party has already raised a small amount of money, £100, towards their legal fund at meetings in Dundee and Aberdeen, and further contributions from our supporters and friends would be welcomed through FireFund.net.

If the G20 Summit represented a competition of strength between the state and the people, the state was the clear winner. But on colour, courage and creative spirit, the left won unopposed — and this is what the establishment really fears.

Post-hoc: The German government has banned the left news website Linksunten Indymedia for allegedly inciting violence during the G20 summit, and has classed its operators as terrorists.