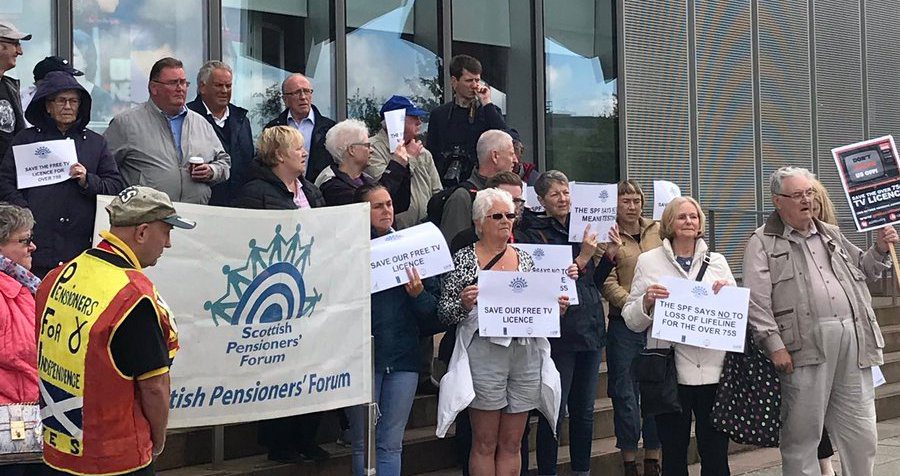 As young school students staged a strike rally in Glasgow’s George Square against climate change, people of the older generation showed their anger outside the Pacific Quay BBC building at robbery of free TV licences from the over-75s.

They were part of UK-wide protests at the BBC announcement that 3.7 million over-75s would have their free licences withdrawn, with a system of means testing where only those on Pension Credit would retain this important benefit.

Nearly 100 gathered, banners and placards aloft, in a good-natured but determined mood to stop this callous cut.

The Scottish Pensioners’ Forum banner was alongside retired union members’ banners from UNITE and UNISON. Significantly, many of the protesters were veteran union activists from a range of occupations, including construction, printing, railways, NHS, and other public services.

Speakers from the STUC, Unite retired members, and the Scottish Pensioners’ Forum (SPF) spelt out their anger at the means testing planned.

As SPF chairperson, Maureen Gardner, ‘joked’ in her speech:

“I face a choice of what to do now. Refuse to pay and face jail, where I can get to watch TV without a fee? Or continue to protest until we win, including more direct action – like occupying the BBC”.

She slammed those behind this heartless plan. “Will the MPs give up the fact they get free TV licences? And I would scrap the House of Lords instead of scrapping free TV licences for the elderly.”

Maureen, the SPF’s vice-chair Elinor McKenzie, and the other speakers made clear they hold the Tory government responsible, not the BBC, and demanded the funding off the government to save the free TV licences. As Elinor said, “We don’t want the BBC to carry out cuts to programmes, or staff cuts. We want the DWP to carry out welfare policies, not the BBC.”

I was honoured to be invited as the final speaker at the rally, with a warm, lively response from the crowd, including when I made these points:
“This cruel, callous cut to older people’s sources of entertainment, company and contact with the outside world is being carried out by overpaid BBC executives on behalf of a vicious Tory government of multi-millionaires. We won’t allow the Tories to hide behind the skirts of the BBC bosses.

“It’s particularly sickening hypocrisy that the pensioners being mugged by the Tories were just two weeks ago being hailed as heroes. This is the generation who fought Hitler and Nazism, who helped reconstruct the British economy after the devastation of War, who helped build the NHS – the same NHS which is being dismantled before our eyes by the same gang of Tory multi-millionaires.

“Well, the clear message from this protest is that we won’t accept these attacks. We will unite, and engage the involvement of the unions as well as pensioners. To not only save free TV licences for the over-75s, but I believe it should also be extended to all retired people.

“And if we taxed the millionaires and big business, we can not only stop this assault on pensioners, fund free TV licences, but also fund a decent living pension, decent wages, and help reverse the robbery of women pensioners born in the 1950s, supporting the WASPI campaign for pension justice for women.

“What’s more, I believe retirement should be both voluntary and affordable, much earlier, starting at 60 – equally for men and women – but with a decent, living state pension.

“Stand firm and united. Demand we tax the rich instead of attacking pensioners, and we can win.”