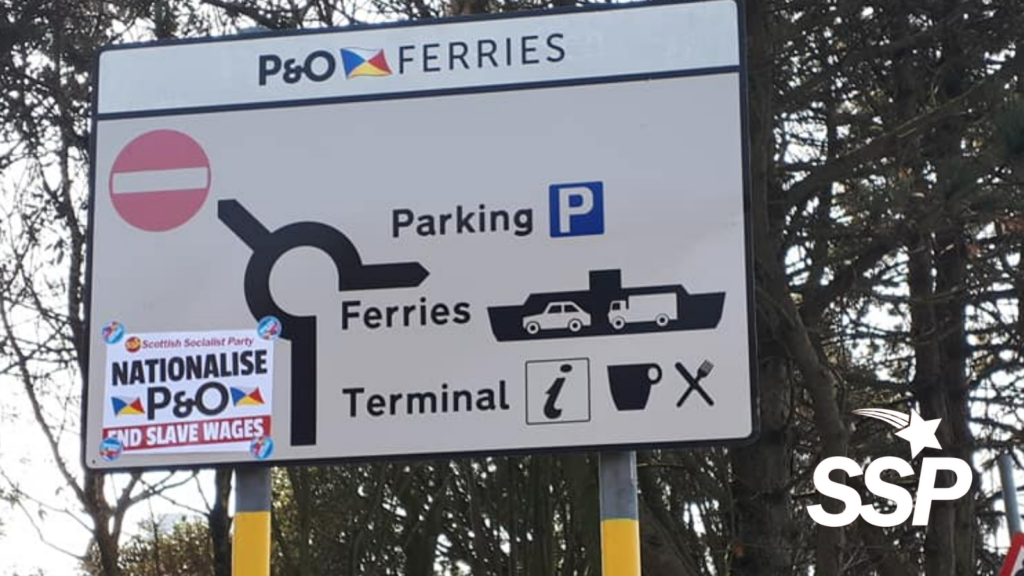 Scottish Socialist Party activists have joined RMT members and other workers in a vibrant protest action at Cairnryan.

On Thursday 17 March, P&O Ferries sacked 800 workers by video without warning – and bused in agency replacements on wages as low as £1.80 per hour. Workers protesting the loss of their livelihoods were handcuffed and dragged away by private security.

The SSP has sent its full solidarity to workers who have been targeted in this vicious attack.

P&O is currently owned by their private parent company, DP World of Dubai, which has reported record profits for 2021. The Scottish Socialist Party is campaigning for democratic public ownership of Scotland’s ferries, the strengthening of worker and trade union rights, and for the end of poverty pay wages and the loopholes that enable them.

SSP Workplace Organiser Richie Venton was at Cairnryan and said:

“A great turnout at Cairnryan to denounce the capitalist thuggery of P&O, demanding reinstatement of the crews and an end to slave labour.

“A colourful and united array of trade unions and political parties including the SSP.

“I was honoured to be asked to speak, calling for a blockade of the profit pirates, immediate reinstatement and for nationalisation under democratic workers’ control to provide a public service instead of it being a source of obscene profiteering on the backs of cheap labour.

“I called for a trade union appeal to the workers dragooned into working for £1.80-an-hour to replace the crews.

“They are not our enemies. Their fate right now is our future, unless we manage to unite workers against the slavery bosses want to impose to boost their profits.

“To round off the protest, RMT members borrowed two SSP posters to decorate the P&O noticeboard and signpost!

“Nationalisation pointing the direction we need to take to end these capitalist atrocities!”