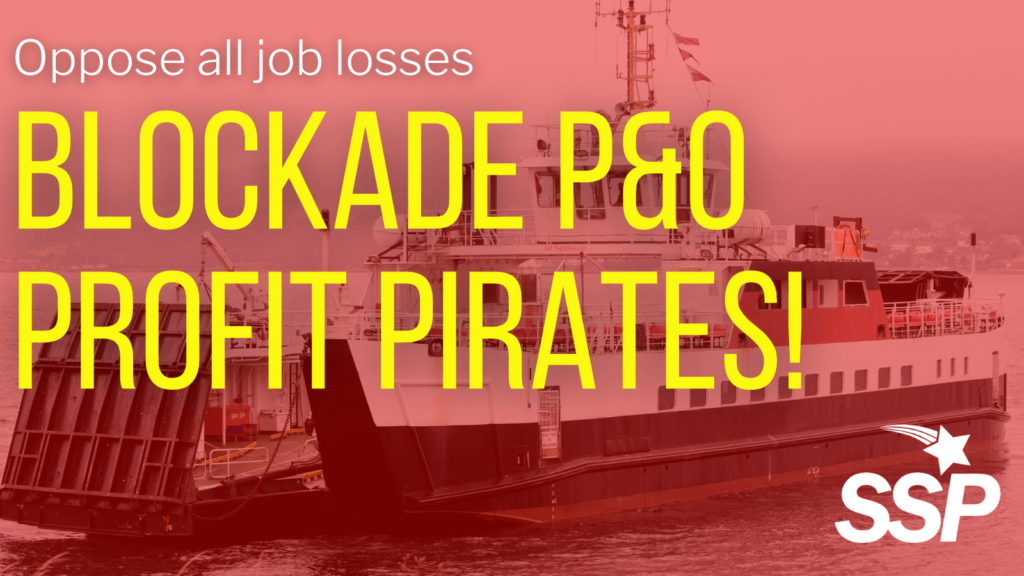 Scottish Socialist Party activists are joining RMT members, and members of other trade unions, in a protest action against P&O Ferries at Cairnryan today.

On Thursday 17 March, P&O Ferries sacked 800 workers by video without warning – and bused in agency replacements on wages as low as £1.80 per hour. Workers protesting the loss of their livelihoods were handcuffed and dragged away by private security.

The SSP has sent its full solidarity to workers who have been targeted in this vicious attack.

P&O is currently owned by their private parent company, DP World of Dubai, which has reported record profits for 2021. The Scottish Socialist Party is campaigning for democratic public ownership of Scotland’s ferries, the strengthening of worker and trade union rights, and for the end of poverty pay wages and the loopholes that enable them.

“This morning I’m off with RMT members, other fellow-trade unionists, and SSP members on the long trek to Cairnryan, for the demonstration against the capitalist thuggery of P&O bosses.

“800 workers sacked on the spot – no warning, no notice, no consultation with their unions. Replaced by slave labour agency workers, on wages as low as £1.80-an-hour.

“All this from a company owned by an arm of oil-rich Dubai, DP World, who made $3.8billion profits last year.

“Today’s demo will demand immediate reinstatement of the crews, sacked by video!

“Instead of shedding crocodile tears, after imposing the vicious anti-union laws designed to help bosses carry out such atrocities, the Tories need to be compelled to nationalise P&O to save jobs and end slave wages.

“If or when the P&O profiteering pirates try to sail with the super-exploited overseas workers they’ve dragooned into replacing the crews, the entire trade union movement needs to help blockade the ports and stop them – aided by a mass boycott by potential passengers.