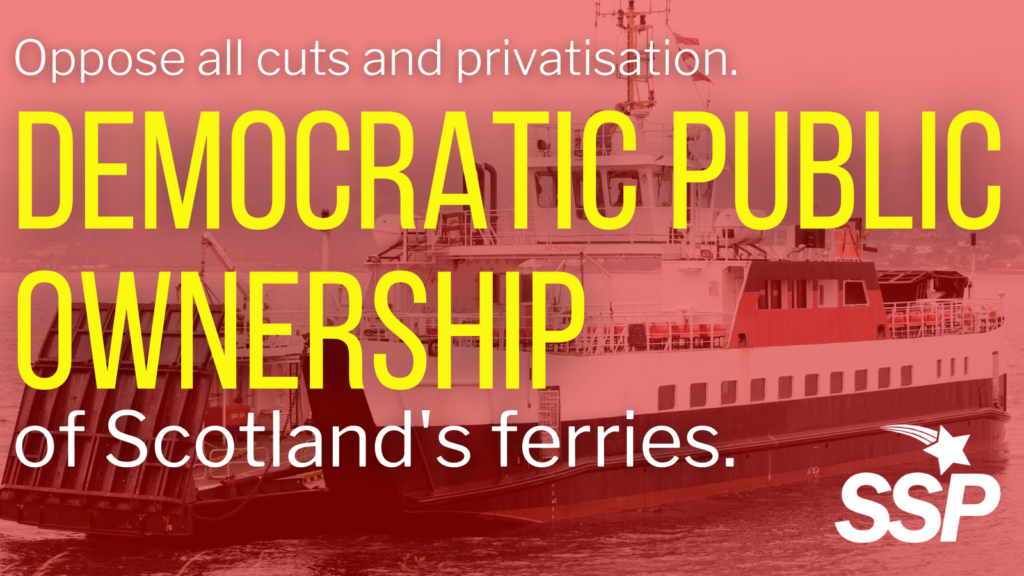 Scottish Socialist Party activists joined RMT members, other trade unions, and other workers in demanding the reinstatement of sacked workers. The SSP is campaigning for democratic public ownership of Scotland’s ferries, the strengthening of worker and trade union rights, and for the end of poverty pay wages and the loopholes that enable them.

Richie Venton was invited to speak at the rally as a member of the Scottish Workers Solidarity Network by RMT members. Richie said:

“I want to give support from the Scottish Workers Solidarity Network, which was established in the wake of me being sacked for standing up for workers and their wages when COVID broke out – when they decided it was better to dump them on £95-per-week Statutory Sick Pay.

“And I saw a living expression of solidarity of working people – combining and including, prominently, the RMT and the UCU – coming to my aid in that period of need. And that is the spirit we all need to unite on in fighting this.

“Because this I have described as the worst act of capitalist thuggery in living memory. The last example I can remember was in about 1981, when Ronnie Reagan arrested striking air traffic controllers, manacled them – put them in the chains, the expression of slavery – and paraded them on television stations to cow the rest of the working class.

“This is the equivalent – except that the P&O workers weren’t even taking strike action!

“Sacked on the spot! Sacked by video! And replaced by people, slave labour, on £1.80 an hour.

“And I think, therefore, it is quite right, as other said: we should blockade these pirates of profit if they try to sail the ships, and put demands that they reinstate the workforce.

“I’ll say one other thing, and say it very clearly: in my opinion, the idea that private profiteers should run the seas and account for 15% of British freight services, as well as passengers, is an obscenity. What we should demand is nationalisation of P&O and the entire shipping industry under the democratic control of working-class people – to make it a service, and not a source of profit.

“Those workers who have been dragooned in to replace the crews are not our enemies. The ones hired as mercenaries with handcuffs are a different matter. But the people from various countries dragged onto the ships in desperation to work instead of the crews, there needs to be an appeal to them to come to the side of the trade union movement – because their fate today is our fate tomorrow unless we manage to unite with them.

“I remember saying, at some of those demonstrations for my reinstatement, that COVID would be an opportunity for some and a punishment for others. An opportunity for the bosses to make even bigger profit, at the expense of cutting wages and conditions for workers.

“If they get away with it at P&O, the rest of us have the same fate coming. Stand firm! Object to these sackings! Demand reinstatement! Blockade the pirates of profit! Demand nationalisation to win decent wages and conditions!”