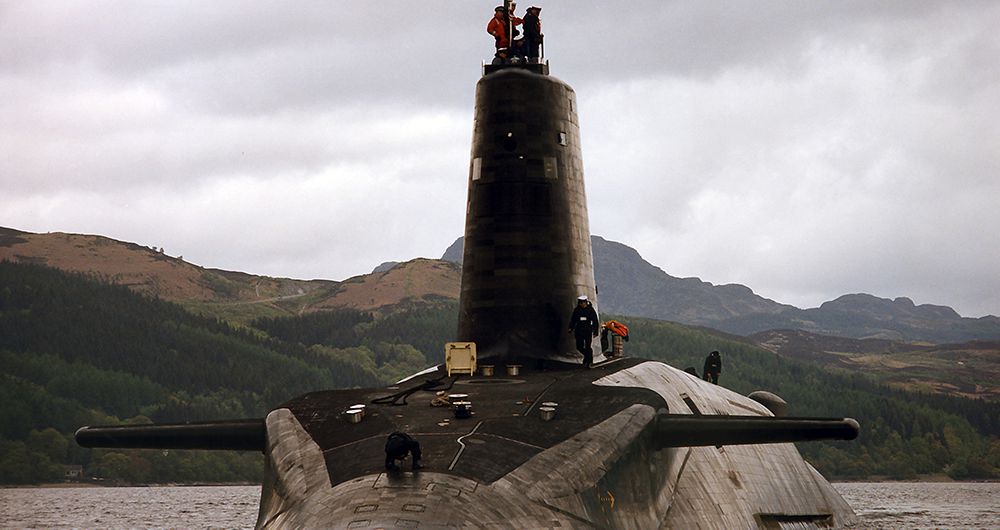 Chancellor George Osborne has unveiled £500m for the future of the Faslane nuclear submarine base.

Mr Osborne said the cash will fund the construction of related projects as it hosts the country’s submarine fleet.

The Scottish Socialist Party’s national co-spokesperson and peace activist Sandra Webster comments: “Today has demonstrated how out of touch the Westminster government is with the majority of the people of Scotland who oppose nuclear weapons and the presence of Trident on the Clyde. The action to fund instruments and delivery systems of mass civilian slaughter against the will of the people of Scotland feels like that of an occupying force.”

“Chancellor George Osborne had to sneak in the back door today due to protests at the main points of entry to Faslane. We believe that the £500m could be better spent on ending austerity. It is a monstrous sum of money available to produce weapons which if ever used will mean the death of us all while people with disabilities are seeing their benefits cut, children go hungry, and essential services are slashed.”

Webster notes a much better use for the money: “Imagine if this sum had been invested in peaceful activities. More doctors, nurses, teachers or carers winning a living wage for all the unpaid work they provide.”

“Imagine if this sum had been invested in peaceful activities.”

“We could have used the money towards reindustrialising the country – for example: Scotland could become the centre of a renewables industry the envy of Europe. Faslane’s excellent geographical position would be ideal to create a base to create wind and sea turbines and – along with the support of the Scottish Trade Union Congress – training staff for decommissioning nuclear power plants when they are no longer needed. Such work would be an asset to the future of Scotland – and would generate many thousands more jobs in the long term.”

Reflecting on what it means for the ongoing independence debate: “During the election we were love bombed by the Conservative Party in the Better Together campaign. They begged us to stay. Government ministers regularly came north of the border to tell us how we would be stronger together. Today’s action demonstrates their true feelings for Scotland. The NO vote was a shallow victory – and actions like this may just be the kindling a second ‪independence referendum campaign needs.”

“The referendum campaign has had a strong legacy, many citizens – previously not active in politics – have found our voice. Scotland has changed. The actions of Osborne today are those he learned at the Bullington Club – a lack of respect for Scotland’s working class, but we will not forget. We believe in conversations and will continue to build on the spirit of the referendum, and winning people over to our ideas that can transform Scotland.”