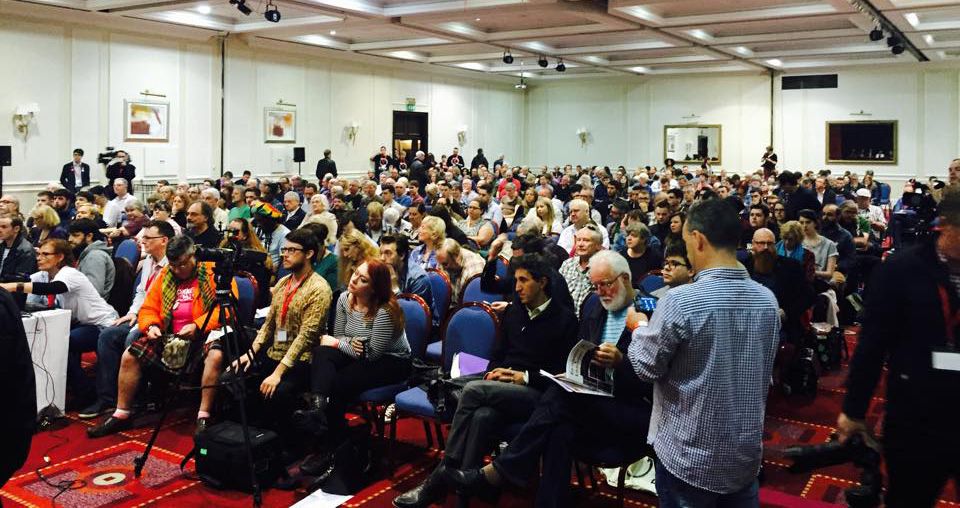 The launch of RISE – Scotland’s Left Alliance, with hundreds of people crammed into the Marriott Hotel in Glasgow for the beginning of a new coalition of the left that will stand candidates in all 8 regional seats in the 2016 Scottish elections.

Colin Fox, our national co-spokesperson, spoke at the opening rally, saying that RISE was “the most important Left unity project Scotland has seen in a generation.” – citing the formation of the Scottish Socialist Alliance in 1996, the precursor to the SSP and the resultant success in 1999 and 2003.

2003 was also cited by Jean Urquhart MSP – on the strengths of a rainbow parliament – “There is a substantial empty bench [in Holyrood] waiting for something like this…the PR system allows us to do that.”

Fox added, “We have a tremendous opportunity to use the platform the Scottish Parliament provides to raise ideas that stick up for working class people in Scotland after a 9 year absence,”.

He reiterated that support for Scottish independence within RISE remains unwavering, drawing “Supporting Scotland’s democratic right to self-determination, does not make you a nationalist – it makes you a democrat!”, to huge applause.

Cat Boyd, Radical Independence activist confirmed that RISE MSPs would take a workers wage – “Politicians must lead the same lives as their constituents, including taking a workers wage, to make them accountable to the people,”

You can join the SSP and shape the socialist movement within RISE today.