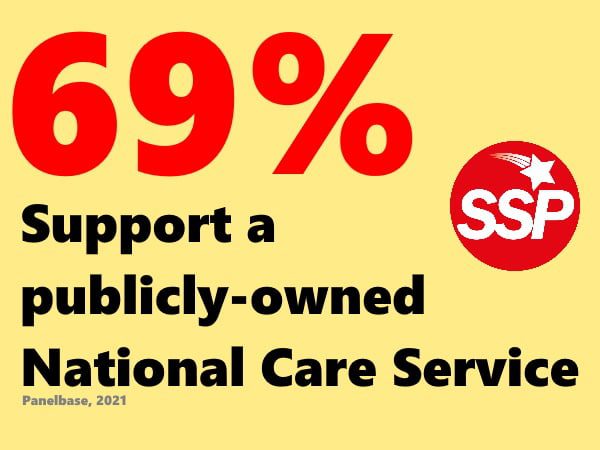 Almost 70% of voters in Scotland want to see residential elderly care taken out of the hands of private companies and brought into a National Care Service, according to a startling new poll out today.

The survey, conducted by Panelbase for the Scottish Socialist Party, revealed that 69% of the population strongly support a National Care Service which, like the NHS, is ‘free at the point of need, paid for out of general taxation, publicly owned and run with facilities regularly inspected to ensure they are fit for the 21st century’.

The proportion of women over 55 supporting the proposal, perhaps the best-informed cohort in the survey, reached 78%.

“These figures bear out what the Scottish Socialist Party and others, like The Daily Record, have been arguing for some time. The current model of residential care is not fit for purpose. The people of Scotland agree that this system must be comprehensively overhauled.

“The care system today looks like the health model was before 1948 when the NHS was established. Back then health services were provided by private doctors, provision was patchy and standards varied greatly. It was a health system not fit for purpose. That’s why our grandparent’s generation fought to change it.

“It is clear from this poll that the people of Scotland are unhappy with the current adult social care model. They want elderly care provided for everyone, paid for out of our taxes, publicly owned like the NHS, and, above all, fit for the 21st century.

“Scotland’s political leaders need to take heed. They have failed to tackle this problem for too long and as this poll shows people are losing patience with them. Half the COVID19 deaths in Scotland occurred in residential care homes and 70% of that care is provided by 1,100 different private companies that can charge up to £1,600 a week or £90,000 a year.

“Moreover in a series of unannounced visits recently The Scottish Care Inspectorate found 40% of facilities were either ‘unsatisfactory’ or ‘poor’. We cannot go on like this. Demand for elderly care is set to increase by 40% over the next decade as ‘the baby boom generation’ of the 1950’s retires. This issue is a ticking time bomb as far as our nation’s elderly care is concerned.

“To add insult to injury the pay and conditions of care workers is a national scandal. More than one-third hand in their notice every year citing low wages and low morale as the chief reason.

“There are those who claim to support ‘a National Care Service’ but under closer scrutiny merely see the present system run by a single ‘Health and Social Care Partnership’ – instead of 31 different organisations – still operating under a privately provided service. Others baulk at making the necessary investment in a service to provide quality care fit for the 21st century. Tinkering reforms for a service plainly in crisis will simply not do.

“The Scottish Socialist Party were out campaigning on the streets of Scotland last year demanding a National Care Service that is free at the point of need and therefore universally, equally and democratically, available to everyone. For that to happen it must be paid for by everyone out of our taxes.

“That way we ensure it is a truly national service. We see that service being publicly owned and run with nobody making whopping profits out of it and running off to the Cayman Islands tax haven with them like the biggest private provider presently does. Only then can we ensure that the quality of care provided is as people demand and those who deliver it are also properly rewarded.”