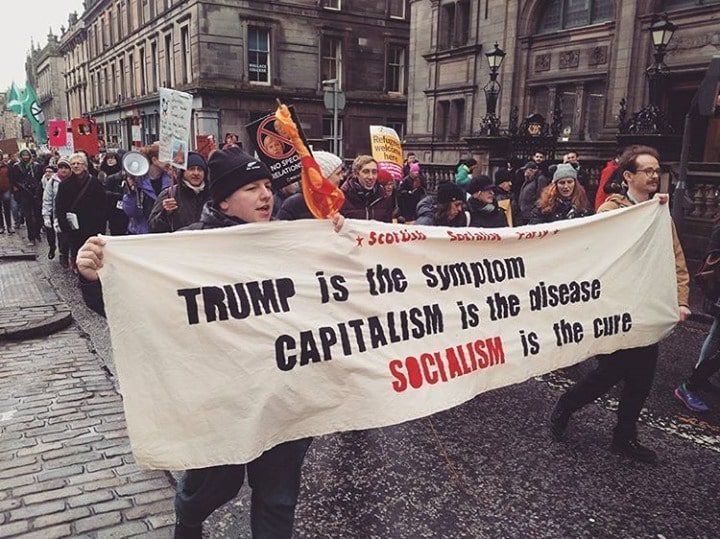 As the United States prepares for the inauguration of its new President, SSP International Secretary Bill Bonnar reflects on the continued need for a socialist movement in America – and why it’s more likely than you think.

As Joe Biden prepares for his inauguration as American President today, it is an opportunity to look ahead to what a Biden presidency will look like.

While the departure of Donald Trump is celebrated, the projection of Biden as ‘progressive’ could not be wider of the mark. Biden is in every sense a creature of the American political establishment, someone who, at another time, would have fitted comfortably into a Republican administration. In fact, it’s almost certain that many leading Republicans privately wanted Biden rather than Trump in the White House.

Politically, his main priority will be to return American politics to that point where this Establishment, an alliance of millionaire politicians and big business representatives, run the country.

However, his government faces the worst economic, social, and health crises since the 1930s. Vast numbers have been struck down by COVID-19; a figure exacerbated by poverty, poor health provision, and a chaotic response to the pandemic.

The economy is in deep crisis with millions left unemployed and often destitute. The pandemic has exposed in the most brutal manner possible the appalling divisions and inequality of American society – with tens of millions of people living in conditions of poverty and poor housing, with little or no access to social security or healthcare.

It is a crisis that requires the kind of radical response identified by Bernie Sanders during his bid for the Democratic nomination. Policies which included a public-sector led recovery programme, the creation of a genuine National Health Service, the introduction of a European-style social security
system, and action to reign in the incredible wealth of the richest in society – including the novel idea that they should pay some taxes.

Unfortunately, none of this will emerge from the inauguration of this Administration. Their main concern will be to defend and extend the interests of big business with hundreds of billions of dollars used to shore up capitalism. It will be like the banking crisis all over again, when the only response from the government was to bail out the banks and prop up big business. Now, as then, it will be American workers who pay the price for the economic crisis.

No wonder some of them were attracted to Trump.

Trump may be gone, or almost gone, but the movement he led is still there and still strong. At its core is a de-facto alliance of scores of far-right groups and reactionary single-issue bodies. What unites them is a heady mixture of racism, xenophobia, religious fundamentalism and right-wing nationalism all wrapped in an American flag.

It is a movement that finds fertile ground among many conservative Republicans and among swathes of a disaffected white working class-driven to despair by the impact of capitalism on their lives. A movement just waiting for the next Donald Trump to emerge.

For those under the illusion that the inauguration of a new Democratic administration will herald in progressive change; it is an illusion soon to be shattered. The Democrats are not, and never have been, a vehicle for such change. They are every bit the party of capitalism as the Republican party. In fact, the main difference between them is who can run capitalism better. Noam Chomsky described them as two sides of the same coin.

As ever, the only real alternative is socialism.

It is often thought that America represented fallow ground for socialists, but this has never been the case. The United States has a rich history of working-class, radical, and socialist struggle. The mass support around much of the programme outlined by Bernie Sanders is the modern expression of this.

So, while the world sends out messages of support to the new President, the Scottish Socialist Party sends out its solidarity to the American people in the struggles they must now face and to the socialist movement in America. You are needed more than ever.