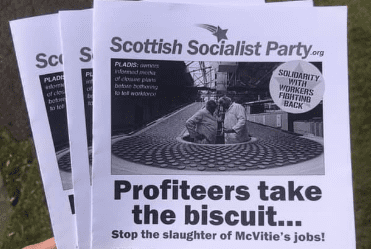 UPDATE: “The stubborn, shameful refusal of the multinational Pladis bosses to even listen to the unions’ alternative proposals to save the Glasgow McVitie’s factory is a reminder we live under the dictatorship of capital, not a genuine democracy.

“Their bloody-minded determination to strip Scotland of its last Mcvitie’s factory, despite 200 years of Scottish heritage for the brand, must not be a signal for surrender, but for renewed, escalated action. Including demands on Glasgow City Council to ban a land sale by Pladis; a serious boycott campaign of all Mcvitie’s products, and relentless demands on the Scottish government to step in and save the workers’ jobs and skills in a publicly-owned food production enterprise.

“This article, written over two weeks ago, points towards what is needed to still save these workers’ jobs and livelihoods.”

The battle to save Glasgow’s historic McVitie’s biscuit factory has reached a crunch point, and those fighting to save all 470 jobs have stepped up the action on several fronts.

Building on nearly 80,000 signatories to the workers’ own Online Petition, union branches collectively representing 80,000 workers have put their names to two Joint Statements which put some of those with the power to decide the factory’s future right on the spot.

These two Joint Union Statements have been promoted throughout the Scottish trade union movement by the Scottish Workers Solidarity Network, to harness the solidarity and potential power of fellow-trade unionists; to hit the plundering Pladis profiteers where it hurts them most: their wallets!

The first Statement demands action by Glasgow City Councillors to stymie the likely plans by Pladis bosses to slaughter the jobs, flatten the factory and then sell the land for profit to property developers – land which they own, unlike at their factories in England.

The joint unions’ Statement calls on the councillors to slap a planning permission ban on such land speculation by these jobs butchers.

It has now been officially submitted to the council by the GMB union. But it cannot afford to be treated as simply a passive piece of correspondence. It needs to be the focus of further, concerted pressure on the councillors to act on this demand, by individuals and Union organisations bombarding their councillors with emails, Tweets and delegations to their councillors’ surgeries.

The need for that is underlined by the fact that despite the McVitie’s shop stewards asking whether any planning permission has already been sought for the factory site, right at the start of the campaign against closure, the City Council leadership have still not given them an answer.

Save McVitie’s Jobs – or Face a Mass Boycott

The second Statement endorsed and co-signed by union branches embracing 80,000 members goes straight for the Pladis bosses’ jugular. The message is stark and entirely justified: save these jobs in Glasgow or face an organised mass boycott of all McVitie’s goods throughout Scotland and beyond!

Again, this hard-hitting Statement from union branches representing 80,000 workers needs to be urgently added to, by every Voice reader pledging to boycott unless the jobs are saved.

Furthermore, everyone needs to get family members, friends, workplace colleagues and members of their trade union or community groups to bombard the McVitie’s bosses with the threat of a boycott if they pull out of Glasgow.

The Scottish Workers Solidarity Network is laying plans to take this boycott campaign onto the streets, particularly targeting the big supermarkets who sell McVitie’s products – unless the Pladis bosses capitulate.

Running parallel with these active protest campaigns, the unions have spearheaded the creation of counterproposals, an alternative plan, involving the construction of a new, 21st-century factory on a nearby site, to prevent the loss of 470 jobs, sustain production in Glasgow, and boost productivity and efficiency through investment in modern equipment.
They have developed a detailed case for a new factory just one-fifth the size of the current, semi-derelict building, producing twice the output!

These counterproposals have been drafted in conjunction with industry experts, through the Action Group, jointly chaired by the City Council and Scottish government. By proposing viable alternatives, at least two bodies of people are confronted with stark choices.

First and foremost, the remote Pladis bosses have to choose between sustaining production in a Glasgow factory, utilising the skills of their loyal, dedicated workers, based on a perfectly reasoned and costed plan – or go ahead with their industrial vandalism, their cynicism exposed for all to see. With the reputational damage which that would entail, and the organised mass boycott of their goods by an infuriated Scottish population.

Secondly, the Scottish government now needs to convert promises into hard cash, to save the jobs. And if bribery doesn’t convince the cynical capitalists of Pladis to reverse their closure plans, then the Scottish government should step into the breach, invest in a public enterprise to produce food, harnessing and adapting the skills of McVitie’s workers, and help feed a population already suffering grotesque levels of food poverty and reliance on food banks.

In the event of Pladis spurning publicly funded bribery to keep production in Glasgow, the Scottish government cannot be allowed to simply shrug their shoulders, blame the Turkish multinational, and wash their hands of all responsibility for the devastation as they throw the McVitie’s workers to the wolves. They need to keep these jobs, skills and food production alive – through public ownership, to prevent public devastation.

Contrary to the impression conveyed by some, this battle is far from over. Loose talk in the media about the unions’ counterproposals being ‘a last throw of the dice’ is dangerously and deliberately uninformed and misleading.

In far too many workplace closures, senior trade union officials have merely gone through the motions, issued a couple of mealy-mouthed press releases regretting the impact, and then surrendered, blaming the workforce for not being prepared to fight. In the process, dodging their own duties to give leadership and present a clear plan of united action that can instil confidence in the workers facing the firing squad.
Workers who put up a fight might not always win, but one certainty is that without a fight they will always lose.

To their eternal credit, the McVitie’s shop stewards have fought back, and with the assistance of their allies – particularly in the Scottish Workers Solidarity Network – have conducted a vigorous, high-profile campaign, and sought to use pressure on the City Council, customer companies and the threat of a boycott campaign as leverage to reverse the closure plans.
However, further, decisive, collective action by the workforce – building on the massive solidarity already generated in the wider public and trade union movement – will be required to win, unless the McVitie’s owners cave in immediately.

There is no need nor room for defeatism in this battle. These jobs must and can be saved, provided the wider workforce stand firm and united in action.

With the already existing levels of mass unemployment, poverty pay and insecure work in Glasgow’s East End and beyond, the alternative to sustained and escalated actions to save all the McVitie’s jobs (and the other 500 jobs indirectly threatened) is simply unthinkable.

The remote Pladis bosses want to rob the prestigious McVitie’s brand name, with its 200-year heritage in Scotland, and its global reputation, by stripping Scotland of its last remaining factory. They literally want to take the biscuit – and run to more profitable pastures in cheap labour economies.

They can and must be stopped in their tracks. The most active trade unionists in McVitie’s have refused to crumble. They need and deserve the active solidarity of the whole workforce and the entire trade union movement. The battle continues; play your part in it!