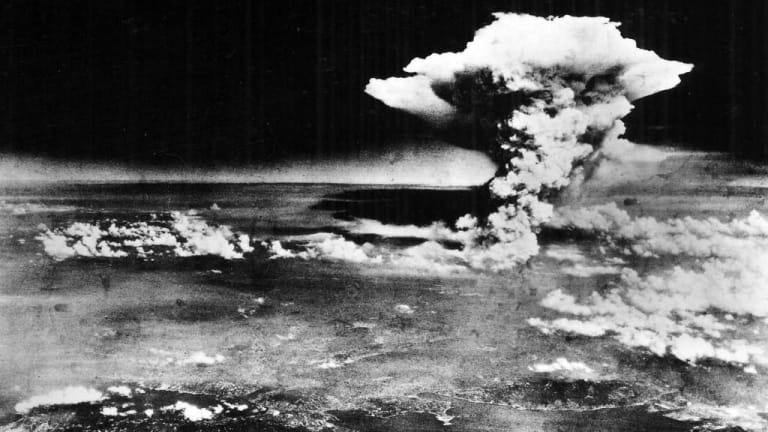 By James Morris, writing from Japan

Seventy-six years ago this August, the USA dropped two atomic bombs on the cities of Hiroshima and Nagasaki resulting in the deaths of over 225,000 people and a recognised 650,000 victims of radiation.

For most of us, impending nuclear doom is far from our thoughts. We may read accounts during the anniversaries of the bombings of Hiroshima and Nagasaki in August each year, we may even visit the two cities, partake in a memorial march, or protest for nuclear disarmament, but most of us don’t consider our impending doom over our morning cup of tea.

Occasionally, however, we may have moments of inspiration. This may manifest itself in the tears we shed when we come face-to-face with a child’s school uniform at Hiroshima Peace Museum which reminds us of our own sons, daughters, nephews, and nieces; as we recognise people we know in the characters of Hilda and Jim when we watch When the Wind Blows; or as we participate in one of the vigils that mark Hiroshima Memorial Day.

Each of these scenarios have touched me personally, but there was one day in particular when the potential fragility of the geo-political world and the hopelessness of nuclear war became abundantly clear to me.

On a morning in August 2017, I was jolted awake by Japan’s emergency warning system (J-Alert) on my phone. Not a particularly rare occurrence, I imagined that a minor to medium sized earthquake would strike within the next few seconds, but as I picked up my phone, I saw a message that I had never seen before.

People across Japan woke up to the alert that morning and I imagine that they all experienced the event in different ways. As for myself, multiple questions immediately began to bounce around my head and I quickly searched for updated news on the internet. It was, after all, unclear to me at the time if Japan was under attack, exactly how many missiles had been fired, and where they would strike.

Of course, it later transpired to be a single test missile that landed in the sea, but for a moment there was a possibility, at least in my mind, that the end was imminent.

How did I react to this possibility of imminent Armageddon? I stayed right where I was in bed “safe” in the knowledge that if this was the start of a nuclear war there probably wasn’t anything I could do to save myself in the few minutes that the warning on my phone had provided me with.

Although many of us daydream about how we would be amongst the few survivors of apocalyptic events, the reality is that in the case of a nuclear war millions of us would die from the blasts, fallout, and subsequent effects. Even the use of a relatively small number of nuclear weapons is predicted to wreak global havoc.

Seventy-six years ago this August, the USA dropped two atomic bombs on the cities of Hiroshima and Nagasaki resulting in the deaths of over 225,000 people and a recognised 650,000 victims of radiation.

Anyone who has read any of the accounts of the victims of the bombings would think that the world may have learned something from these highly destructive bombings, but instead in their fallout, the USA, the Soviet Union, and their respective allies chose to engage in a nuclear arms race that would place the extinction of humankind at the fingertips of a handful of the world’s puppet masters.

Even today one can easily find people willing to proclaim that the bombing of Hiroshima and Nagasaki were justified and that nuclear weapons are needed for “our” protection. The reality is, however, that the leaders of the USA, Russia, the UK, France, China, India, Pakistan, North Korea, and Israel, now hold all the cards and could through choice or human error usher in the end of life as we know it in a matter of seconds.

Of course, it would be wrong to suggest that humankind has taken this state of affairs lying down. The non-proliferation and ban of nuclear weapons has been a central issue around which numerous social movements have developed during the last three quarters of a century including, perhaps most famously, the Campaign for Nuclear Disarmament and, if we think of Scotland, the Faslane Peace Camp.

These sorts of campaigns have become central to leftist political action and I remember fondly my own participation in the vigil in Dundee with SSP members when I was living in Scotland in the early 2010s.

A boon to many campaigners the Treaty on the Prohibition of Nuclear Weapons (TPNW) came into effect on January 22, 2021.

The treaty has been ratified by 53 states including Austria, Bolivia, Cuba, Ireland, Mexico, Palestine, and Vietnam, but no nuclear arms bearing country has yet to ratify or accede to the treaty.

Most notably, Japan, the only country to have felt the effects of nuclear weapons in wartime, has refused to sign or ratify the treaty despite the campaigning of the victims. The treaty featured in the speech of Hiroshima’s Mayor Kazumi Matsui given on August 6th who urged world leaders to support the treaty and demanded the Japanese government do the same. The Mayor of Nagasaki, Tomihisa Taue, made similar remarks on August 9th and highlighted the treaty as a starting point to realize a world free of nuclear weapons. Nevertheless, Prime Minister Yoshihide Suga, who has previously campaigned against nuclear weapons at the UN, stated on August 6th that Japan will not be party to the treaty.

Ostensibly Japan cannot ratify the treaty within the current context nuclear proliferation which has seen the overall number of deployed nuclear warheads increase from 3,720 in 2020 to 3,825 in 2021, and countries such as the UK and USA have announced plans to expand and modernise their nuclear arsenals. It would be defensively dangerous, we are told, for Japan to do so.

In other words, the Japanese Government is reiterating the lie that we have all been fed for the past 76 years – we need nuclear weapons to protect ourselves from them, the other, untrustworthy countries and peoples who also have this technology.

It is a message that plays on nationalistic us-them narratives. The reality, however, is far more simple – nuclear weapons are a highly profitable business and as the COVID-19 pandemic has illustrated for those in power it is profit and not the lives of the people that is of utmost concern.

In 2019, the value of contracts between governments and private businesses involved in the development and maintenance of nuclear was estimated to be worth $116 billion dollars.

Whether or not the Treaty on the Prohibition of Nuclear Weapons will prove to be effective is yet to be established, but as it marks, in the words of the aforementioned Tomihisa Taue, “the first time in human history that there [has] been an international law clearly stating that nuclear weapons are unequivocally illegal,” it is essential that we continue to pressurize our respective governments to support the abolition of nuclear weapons and to uphold both this treaty and the Non-Proliferation Treaty currently being flouted by several of the world’s nuclear powers.